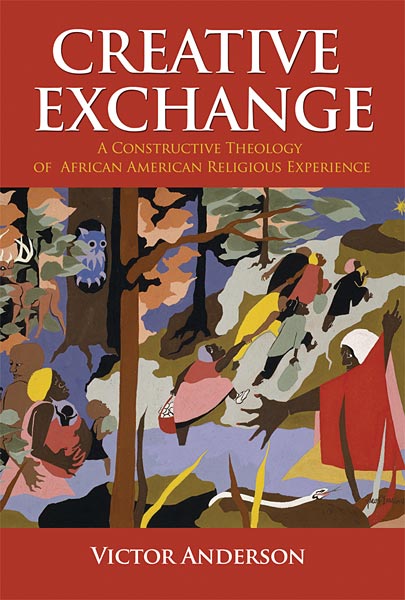 At the core of Creative Exchange is the invitation for African Americans to embrace a kind of self expression and theologizing that, although finite, is far more open to the nuances of the human experience than some African American theologians tend to articulate.  Creative Exchange — the process of being in and experiencing faith in community without shrinking from grotesqueries and ambiguities —is Anderson’s theoretical key to pragmatically actualizing, grounding, and perpetuating Thurman’s and King’s ideal of Christian faith enlivened in community.

With Creative Exchange, Victor Anderson extends the mosaic begun with his earlier works, Beyond Ontological Blackness; Pragmatic Theology: Negotiating the Intersections of an American Philosophy of Reli­gion and Public Theology; and his doctoral dissertation, The Legacy of Pragmatism in the Theol­ogy of D.C. Macintosh, H. Richard Niebuhr, and James M. Gustafson.  Each publication points to Anderson’s concern with human experience be it the ethical, the religious, or the African Ameri­can.  In Creative Exchange, Anderson avoids defining categories of existence with essentializing broad strokes, and argues instead for an open reality containing a plethora of possibilities inherent in living and being.  Nonreductively, Anderson asserts the diversity of African American religios­ity as he queries the signifiers black versus African American; the prominent suppositions of Black Theology and African American religious studies that focus on the anguish resulting from racial degradation; and the failure of the African American intelligentsia and institutions to serve African American peoples.  In so doing, he provides suggestions for concretizing the idea of “Beloved Community” advocated for by Howard Thurman and Martin Luther King, Jr.

Jacob Lawrence’s painting Through Forest, Up Rivers, Up Mountains on the book’s cover illustrates well the scholarship and spirit that undergirds Anderson’s view of the African American experience.  In this image, one finds the various themes present in Anderson’s expansive universe of human experience – among them beauty, nature, diversity, intimacy, alienation, liminality, and defiance.  Ultimately, Anderson’s is a constructive, pragmatic theology in which he again states his suspicions about the persistent socio-racial constructions employed by black liberation and wom­anist theologians in defining blackness by its affinity with “suffering, humiliation, struggle, surviv­al, and resistance” (8), and the consequence of a definition dependent upon the contra-category of whiteness and the violent expression of white supremacy.  He grounds his protestations in the hu­man realties of the grotesque, its ensuing ambiguities, and the pragmatic theory of shared human­ity or “the unity of experience.”  By the grotesque, Anderson means that which is found in conflict, disharmony, dichotomies, and disparity.  Since the occurrence of the grotesque and ambiguity are constant realities, there is often an inability to see one’s self and one’s situation fully, resulting in an irreducible assessment.  Anderson intimates that the theorizing of Black liberation and woman­ist theologians has failed to honor the conundrum that the grotesque and its accompanying ambi­guity pose, which has resulted in a propensity to reduce the grotesque and the ambiguous.  Bor­rowing from the work of Henry Nelson Wieman, James M. Gustafson, and others, Anderson sees the brute dynamics of suffering as mere aspects of the larger African American experience, which he deems far greater than and beyond these experiential limitations.  Race is a deeply grotesque symbol subject to greater actuality due, in part, to its vulnerability to social change.

In order to construct his cutting-edge theology, Anderson deconstructs race in Chapter 1, “Be­yond Dichotomies: Toward a Relational Concept of Race in African American Religious Experi­ence.” Here he illustrates the perspectival nature of race, as he juxtaposes the views of African American philosopher Lucius T. Outlaw with those of the American-based Ghanaian philosopher, Kwame Anthony Appiah. In this section, he draws on the hermeneutics of Charles H. Long to posit a relational concept of race that uses the theories of each scholar named here, among others. Long’s phenomenological hermeneutic is, in fact, crucial to Anderson’s construction throughout the volume.

In Chapter 3, “Faith on Earth: A Defense of Redemptive Suffering in African American Theol­ogy,” Anderson articulates the opportunities for personal transformation and empowerment, and the gift of care, that may follow suffering.  These, of course, are the redemptive qualities of suffer­ing.  Anderson then moves on to the fourth, and central chapter of the book, “The Smell of Life: Pragmatic Theology of Religious Experience,” where he makes the case for this book serving as “a constructive theology of African American religious experience” (111).  Here, Anderson fashions Thurman’s conception of experience into a pragmatic theology; central to it is the interrelatedness of lived experience, memory, pain, and expressions of adoration and faith – the substance of things hoped for, the evidence of things not seen – in prayer and praise.

Chapter 5, “Home and the Black Church: Centers of Value in a Pragmatic Theology of African American Religious Experience,” describes the ways in which to ground Anderson’s constructive, pragmatic theology.  Manifesting the Beloved Community requires families and particularly the Black Church to “enlarge the personal wholeness of its members” (169) by becoming centers of creative exchange and by truly attending to the basic human desire for fulfillment.

To forge his theology, Anderson deftly applies prayer, African folktale, graphic visual images, and narrative while he culls aspects of pragmatic philosophy, black theology, and religious studies to draw the reader into his Creative Exchange.  In his attention to the realities of life, he demon­strates a transparency and responsiveness that are greatly lacking in the Black Church and among African-American practical theologians, particularly with respect to the realities of women clergy and gays and lesbians.  Transparency and responsiveness are two qualities that Anderson cpracticalmattersjournal.orgs for in the name of “practicalmattersjournal.org encompassing love.”  His exposé of the Black Church further indicates his prag­matic and unusual commitment to an ugly truth that he has experienced first hand. If embraced, this truth could set free practical theologians and the clerical elites of the Black Church (as well as their students and congregants) from their dehumanizing, and simultaneously self-aggrandizing and self-degrading, hegemonic patriarchy and puritanical homophobia. Anderson himself advo­cates with a “whosoever will” compassion for practicalmattersjournal.org of the Creator’s children who seek communion, entirely in the spirit of Creative Exchange and Beloved Community.

Truth-seekers committed to frank discourse will find Creative Exchange a timely, provocative, suggestive theology for our decidedly multicultural times, particularly in the Barack Obama era of American politics and culture.  Gone should be the days of viewing ethnic groups as monolithic.  What I find splendid about Anderson’s work is that he does not do away with prior views on pain and suffering, like those expressed in black liberation theology or womanist theology.  Rather, he simply expands the experiential boundaries as he encourages a practical theological paradigm shift that points to irruptions and the yet-to-be-fathomed realities of life where we find God and Beloved Community.  His dialogue with scholars with whom he does not agree, and his propensity to take on what he considers challenging and even harmful in their work, indicates his commitment to facing the grotesqueries and ambiguities in order to enter into a Creative Exchange.  Yet Anderson does not stop there.  He presses on to find what is best and useful in their work, marrying their beautiful, life-bearing notions with his own in order to fashion a Beloved Community of scholarship.  In this way, Anderson gives readers an example of a literary praxis full of grace, humility, and great intellectual curiosity.