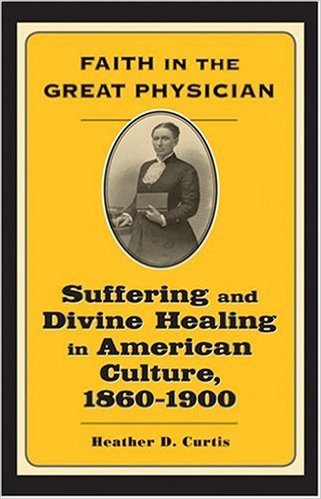 In Faith in the Great Physician: Suffering and Divine Healing in American Culture, 1860­-1900, Heather D. Curtis offers a nuanced analysis of the rise of the divine healing movement in the United States during the last half of the nineteenth century. Curtis details a shift in Christian theol­ogy and practice from a passive submission to pain, popular in midcentury, to a new affirmation that, by what Curtis calls “acting faith” and “resting in God,” Christian believers could achieve the healing of the body in addition to that of the soul.

In Faith in the Great Physician: Suffering and Divine Healing in American Culture, 1860­-1900, Heather D. Curtis offers a nuanced analysis of the rise of the divine healing movement in the United States during the last half of the nineteenth century. Curtis details a shift in Christian theol­ogy and practice from a passive submission to pain, popular in midcentury, to a new affirmation that, by what Curtis calls “acting faith” and “resting in God,” Christian believers could achieve the healing of the body in addition to that of the soul. As Curtis demonstrates, believers in divine healing (or faith cure, terms which the author uses interchangeably) sought a middle way between submission and active “will power” through faithfully trusting the “Great Physician” to heal them. One chapter of Curtis’s book appeared in a 2006 edited compilation, Practicing Protestants: His­tories of Christian Life in America, 1630-1965. Here, readers will be glad to have much more than one chapter of Curtis’s insightful analysis of this little-studied movement.

Curtis’s work offers a two-fold focus: first, she provides a close portrayal of the lived expe­rience of “acting faith,” the paradoxical ability of believers to act as if their pain had vanished, despite still feeling those same painful symptoms. Second, Curtis admirably situates this lived experience in the wider currents of late-nineteenth century American culture, currents such as al­ternative health therapies, the professionalization of the medical establishment, changes in gender roles, and shifts within Protestant theology. Curtis’s work also reveals connections between that movement and the nineteenth-century’s well-studied “alternative” movements, namely Christian Science, Adventism, Spiritualism, and New Thought.

The book’s chapters move both chronologically and thematically. The opening chapter de­scribes the relationship between suffering and salvation in the mid-nineteenth century. A second chapter places the origins of the divine healing movement in the movements for Holiness, Chris­tian Perfectionism, and alternative health therapies, as well as in a fourth source, what Curtis calls “physical Arminianism” (61). This term indicates that the rejection of Calvinism’s stern God of punishment encouraged and paralleled faith cure’s rejection of an ideal of sickness that glorified suffering. Chapter Three highlights the “devotional ethics” of the movement, engaging in a nuanced exploration of “acting faith.”

After these three opening chapters, the book turns toward an analysis of the divine healing movement’s practices and lived experiences. Chapter Four looks at three central practices: prayer, the laying on of hands, and anointing with oil. Through these practices, believers embodied a changed attitude toward their physical symptoms, which Curtis interprets as “visible symbols that signified an internal, and therefore imperceptible, transformation” (119). Chapter Five examines “houses of healing,” or homes for faith cure, which revealed tensions between the movement and the medical establishment over the proper response to illness. Finally, a sixth chapter looks at what believers did after their faith helped them live active lives again; these activities usually included some form of service, often with their families, through evangelism or missionary activity, or in urban ministries such as temperance or dress reform.

This book appears as part of the Lived Religion series, edited by David D. Hall and Robert A. Orsi, and as befits such a series, Curtis’s work couples a strong analysis of these practices with an equally strong grounding in the study of lived religion and practice. Her introduction to the book describes the methodological influences on her work, including Leigh E. Schmidt’s “retrospective ethnography” and the writings of Catherine Bell and David D. Hall on religious practice. These influences fade to the background after the introduction, allowing her analysis and the voices of her historical characters to speak. Her sources include both the published and unpublished records of prominent participants in the movement (such as Charles Cullis, Carrie Judd Montgomery, and Jennie Smith), the papers of less well-known individuals, and an impressive array of periodicals, books, and tracts.

Historiographically, Curtis sees her work as a corrective to previous histories of the faith cure movement, which have understood it in theological rather than practice-based terms. Curtis also notes that the evangelicals in her book add complexity to the usual portrait of alternative religions in the nineteenth century. I would add that it does much more than she acknowledges. To conver­sations about the relationship between religion and pain, Curtis adds an evangelical perspective, especially to Robert A. Orsi’s writings on American Catholicism and pain; to discussions of the relationship between religion and the body, she adds a perspective on the practices of healing, es­pecially to R. Marie Griffith’s work on the role of the body in American Christianity.

The book finds its analytic strengths in its discussions of gender in relation to suffering, sub­mission, and faith healing; in its discussions of the paradoxes of a cure that did nothing to actu­ally stop the pain; and in its nuanced considerations of the domestic settings of sickness. I would have enjoyed learning more about several topics that emerged after this study’s end-point of 1900.

Curtis draws many connections to alternative movements that flourished in the same years that she covers in her study, including Christian Science and Spiritualism. In addition to these, I would have liked to see stronger connections made between the faith cure movement and New Thought, the gospel of wealth, and Pentecostal healing practices. The relationship between these three and Curtis’s divine healing movement have yet to be more fully explored. As befits a carefully writ­ten book, however, Curtis notes many of these exclusions in her introduction and discusses them briefly in the book’s conclusion.

An excellent contribution to the study of religious practices in America, this book deserves a prominent place in classes on religious practice, evangelical religion, cultural history, and the nineteenth century in America. At very nearly fifty dollars for the hardcover, however, it carries a steep price tag; one can only hope that a paperback edition will arrive speedily so that all interested scholars – from first-year graduate students to established senior voices – can more easily add Faith in the Great Physician to their personal libraries.

By Emily Mace
Emily Mace is a graduate student in American religion at Princeton University.