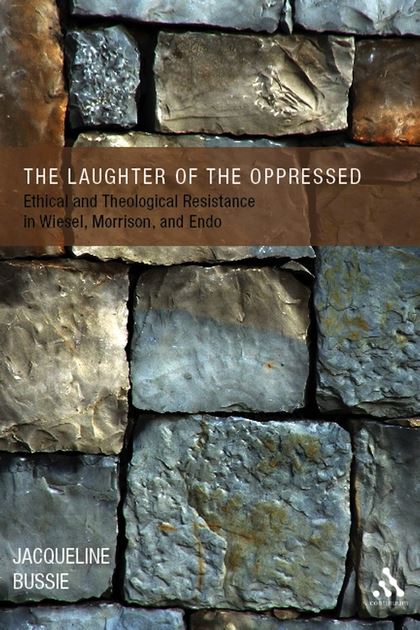 When laughter arises in the midst of experiences of radical suffering, we often fail to get the joke. Yet Jacqueline Bussie contends that conceptions of laughter that connect it only with mirth or risibility have missed laughter’s function as a modality of resistance when it comes “from below.” The Laughter of the Oppressed addresses this gap in our ethical, theological, and philo­sophical conceptions of laughter by investigating the appearance of laughter in three novels: Gates of the Forest (Elie Wiesel),Silence (Shusaku Endo), and Beloved (Toni Morrison). The critical reception of these novels has ignored the laughter that they portray in the midst of the Holocaust, religious persecution in 17th-century Japan, and the era of American slavery, respectively. Bussie uses these novels to illustrate how laughter can be a generative category for a Christian theological response to radical suffering. Along the way, this 2006 Trinity Prize-winning book also reflects an innovative two-fold theological engagement with literature and Jewish sources. Following the examples of womanists Delores Williams and Katie Geneva Cannon, Bussie turns to these novels that “imaginatively recapture and tell a story that has never been told,” since official accounts of history regularly neglect the oppressed (79).

In the novel Gates of the Forest, a Hasidic Jew seeking refuge in a cave in a Transylvanian for­est during the Holocaust is visited by a stranger named Gavriel (“man of God”), who exhibits the strange behavior of laughing. Bussie analyzes Gavriel’s laughter as an extra-linguistic response to the commonly acknowledged post-Holocaust rupture of language (31). This laughter from below also functions as an interruption of the system of dehumanizing oppression imposed by the Na­zis on the Jews. Laughter “interrupts the banality of evil,” offering a “theodician” response that resists evil while still acknowledging that rational discourse cannot incorporate radical negation (32). Bussie illustrates how laughter in this novel captures the paradox of Hasidic faith after the Holocaust, which attempts to hold together faith in God and an experience of the world that seems to negate faith in God. Developing her interpretation of Elie Wiesel’s novel in conversation with other Jewish thinkers and supplementing it with survivors’ testimonies, Bussie models an approach that engages Jewish thought “on its own terms.” By using her reading of laughter as paradoxical faith in Gates of the Forest as a hermeneutical lens on Silence and Beloved, she seeks to learn from Jewish responses to the Holocaust without assimilating or Christianizing their contributions.

Bussie’s chapter on Silence, titled “Believing Apostates,” transposes the idea of laughter as paradoxical faith into the Christian tradition. This concept occasions a powerful rereading of Shu­saku Endo’s controversial novel, opening up a new level of the novel’s architectonics while simul­taneously coaxing theological insights about the collision of faith and doubt out of the novel’s par­ticular wisdom. Endo imagines the experience of a Portuguese priest who ultimately apostatizes as he struggles to understand the persecution that he and his Japanese Christian community endure at the hands of the early Tokugawa shogunate. Bussie reads this priest’s paradoxical laughter as an expression of the theological concepts of the Christian as simul justus et peccator (“at once sinful and justified”) and of the dialectic between faith and doubt. In addition, laughter becomes a reflec­tion of kenosis in imitation of Christ’s own kenosis and as a manifestation of and supplement to a theology of the cross. In this theology of the cross, which Bussie draws from Luther, “the resurrec­tion does not negate the cross’ scandal, nor does the cross negate the resurrection’s beauty” (115). Christ then emerges as “the constant cosufferer and self-emptying companion of humankind” in terms that reflect a particularly Japanese form of Christianity (113). Some readers may wish for a more explicit engagement with feminist critiques of kenosis-for-others, but Bussie carefully selects her words, never speaking of Christ as suffering for us in our place, but rather alongside those who suffer. Her general liberationist approach offers much in the way of re-imagining the cross in terms of solidarity.

With respect to Beloved, Bussie broaches gendered aspects of oppression in the institution of American slavery. Toni Morrison’s novel narrates the story of Sethe, an escaped slave who mur­ders her daughter and attempts to murder her other children rather than surrender them to slavery. Instead of focusing on Sethe herself, Bussie investigates the characters connected to her – Baby Suggs, Sixo, and Paul D – whose laughter heralds alternative forms of identity and religious faith that resist the oppressed consciousness imposed upon them by the system of slavery. This laughter speaks to the paradox of faith in the face of suffering present in each of the other two books, but also picks up an idea that Bussie introduces in her analysis of Silence: that laughter provides a way out of either/or dichotomous thinking. This concept of laughter enables her to interpret Sethe’s ac­tion in a more ethically and theologically sophisticated way. “Sethe is both a mother who dearly loves her children and the murderer of those very same babies. The paradox is: she does kill her babies in order that they may live” (172). Bussie argues that laughter is able to hold together the both-and of Sethe’s choice that is absurd to rational thought and that escapes language.

Finally, the category of laughter undergirds Bussie’s major constructive theological contribution. “To put it simply,” she writes, “Christians need to recognize that either/or dichotomous thought can be sin” (88). A theology of laughter expresses the limits of theodicy, calling Christian thought to “sustain a commitment to theological honesty” that confesses “the problematic of a theology of suffering” (188-9). Bussie’s own approach models a kind of aesthetic theology whose engagement with literature speaks to the limits of rational discourse in the construction of a theol­ogy of suffering. Her imaginative interweaving of these three literary texts with theological and ethical thinkers is so adept that her brief theological reflection in the final chapter is almost unnec­essary. This book will be invaluable for those seeking alternative modes of theological discourse and a way forward in response to the rupture of language occasioned by radical oppression.

Cite this article as: Susannah Laramee Kidd. "The Laughter of the Oppressed: Ethical and Theological Resistance in Wiesel, Morrison, and Endo." Practical Matters Journal (April 1, 2009). http://practicalmattersjournal.org/?p=1960.