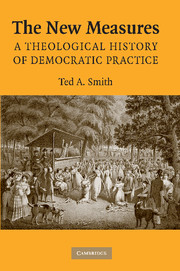 Although numerous scholars have considered the relationship between Christianity and de­mocracy in the United States, few have turned to Charles Finney (1792-1875) to stimulate dis­cussion. Yet this proponent of revival, famous for his advocacy of the “new measures” — novel homiletic practices, often at odds with Puritan convention, esteemed according to their effective­ness in winning souls — stands at the center of Ted Smith’s important book.

Smith offers a vivid account of Finney’s activities in the 1820s and 1830s, considering topics as diverse as the “anxious seat,” the enactment of sincerity, and the rise of middle class respect­ability. The principal purpose of this account is not to present Finney’s brand of revivalism to a scholarly audience, nor to expound a thesis about a distinctive moment of Protestant history. Smith’s foremost interest is Finney’s legacy. His argument is that the practices, assumptions, and cultural standards that Finney valorized had a hand in shaping the “lived stuff of democracy in America” (2). A bold claim, for sure, but one forwarded with admirable care. Smith knows that Finney deployed the new measures in a complex economic, social, and cultural context, itself productive of democratic institutions and practice. Finney, moreover, was no Thomas Jefferson; he did not intend to promote democratic values. Nevertheless, Finney’s new measures were tre­ mendously influential, as is evidenced by the fact that his opponents embraced the practices they claimed to decry, thereby establishing as normative distinctive habits of thought and modes of ac­tion. Finney’s understanding of choice, his gestures towards egalitarianism, even his negotiation of a nascent celebrity culture: all this, and more, exercised an influence beyond Finney’s wildest imagining, contributing to the formation of nineteenth and twentieth-century political mores.

Accompanying Smith’s careful cultural-historical work is an intriguing theological proposal — a first step towards a “materialist political theology” (10) that avoids the dead end of ideology critique (which struggles to look beyond the circulation of power) and the current vogue for idealized, ecclesial utopias (which ignores sinfulness in the church or lapses into gemeinschaftlich modes of analysis). Smith coordinates insights from critical theorists such as Walter Benjamin with a creative application of that cherished Protestant maxim, simul iustus et peccator (at once justified and a sinner). He seeks an affirmation of the positive value of various homiletic practices, paired with a frank acknowledgment of their “mortification,” overarched by the hope that, from an eschatological perspective, God ensures that human efforts play some role in the establishment of God’s redemptive reign. So, for example, while an inhibitive concern for middle-class respect­ability tarnished the revivalists’ commitment to equality, articulated during services at the Cha­tham Street Chapel and institutionalized in the foundation of Oberlin College, one needn’t view this as yet another instance of good intentions gone awry. God’s gracious action overcomes the mortification of initially promising endeavors; God’s redemptive working grants our failures some kind of role in God’s providential design. Just as God lifts up the awkward mumbling of a tired, incompetent, deadbeat minister, turning his or her words into a vehicle of the Word, so too does God make good the most pitiable of new measures, past and present. The American project of de­mocracy, more generally, may appear to be a disappointing affair, its worthiness compromised by broken promises and the monotony of oppressive structures. And it is a disappointing affair — we do not do the good we ought. An eschatological reading of history, however, allows one to catch sight of something better. It inspires a mature hope that discerns God repairing, and finding value in, the most mediocre political ventures.

This is a wonderful piece of work: rhetorically powerful, ably researched, and tremendously creative. To coordinate insights from critical theory, cultural studies, and Christian theology is a notable feat; to do so atop a powerful statement about the formation of democracy in the United States is something close to remarkable. Perhaps the highest compliment one can offer Smith is to say that, rather than simply demonstrating an interdisciplinary sensibility, his book applies such a sensibility rigorously, pertinently, and effectively. Smith is right to bring cultural history into discussions about Christianity, democracy, and the United States. He shows nicely how “local knowledges” circulate and ramify in surprising ways, thereby complicating any easy separation of the realms of church, civil society, and state. Smith is also right to commend a theological reading of history. Although a more detailed elaboration of his theological perspective would have been useful (comments on figures such as G. W. F. Hegel, Wolfhart Pannenberg, and Johann Baptist-Metz would have complemented usefully the brief treatment of Delores Williams and Stanley Hauerwas), his remarks about “eschatological memory” strike me as terrifically important. Christian theologians must of course show due caution when relating the doctrine of providence to modern events, lest they offer a theological accreditation of worrisome forms of exceptionalism. But refusing any connection between divine activity and political life creates a problematic aporia in thought. Smith offers us a theological posture that has the confidence to identify and repent for the interminable political sinfulness of the United States, while also holding out hope for redemp­tive transformation. This posture need not breed arrogance; rather, it can engender humility and, as Smith suggests, enable a “lighthearted” appreciation of old and new measures.

None of this means, of course, that the text stands beyond reproach. A book this ambitious in­ vites multiple lines of critique; I would identify two points of concern. The first pertains to Smith’s handling of the historical material. My worry is that the interpretative sequence used to organize the material in chapters one through six — an initial anecdote, followed by an identification of a homiletic quandary and a description of the new measures remedially employed, followed by an account of opposition, leading up to a conclusion that identifies both the “mortification” and the possible eschatological redemption of said measures — sometimes proves cumbersome. It is not that Smith distorts the evidence to fit his analytical scheme; he is too good a historian for that. Rather, his fondness for an ordered “methodological drill” (15-42) imposes a restrictive tempo on his otherwise lively analysis. Put a bit differently, and with a switch of metaphors: I fear that Smith paints a too-tidy portrait of the past, even as he insists that the history of democratic practice in the United States is irreducibly messy.

My second concern is theological. While I appreciate Smith’s eschatological derring-do and understand that his brand of hopefulness is no head-in-the-sand optimism, does not a Christian reading of history require that tragedy be acknowledged? Are not some instances of sin irredeem­able? One of Smith’s subsections tells of an infamous “lynching at Oberlin;” it discusses an in­cident in which a seventeen-year-old boy, accused of sending bawdy notes to female classmates, was subjected to a farcical trial and then physically abused by faculty members and students. Smith associates this “lynching” with the mortification of certain new measures: despite Oberlin’s laudable promotion of equality, operative still were assumptions about respectable gender rela­tions, conduct befitting a gentleman’s class, and the need for vigilante justice. And, of course, he holds out hope for something better: “an Oberlin with room for both full equality and the desire that flourishes in the presence of difference” (179). Yet all this diverts attention from a more obvi­ous point of reference for lynching — viz., murderous mob actions, “novelly” deployed by white Americans, in service of a vicious form of racism. And it spurs one to ask whether Smith success­fully differentiates a complicated kind of hope, which wrestles with the reality of human sin, from a blithe optimism, which moves too quickly past events that, no matter one’s confidence in God’s providential design, disrupt theological analysis. Does Smith’s perspective give adequate voice to the victims of brutal, terroristic crimes against humanity? Does his “refusal to imagine any cor­ner of creation, any moment in time, as Godforsaken” (260) bespeak an unwillingness to wonder whether some moments of American history cannot be redeemed, given their almost unthinkable atrociousness?