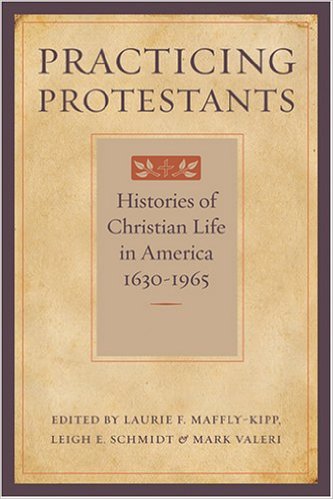 In Practicing Protestants: Histories of Christian Life in America, twelve scholars use theories of practice to construct a broad narrative of Protestant religion in America. The idea for the book came out of the History of Christian Practice Project, which was inspired by the trend towards “lived religion” in the study of American religion. This trend, often closely identified with the work of Robert Orsi and David Hall, suggests that studying lived religion can help scholars under­stand how everyday people experience religion outside of church or creed.

In Practicing Protestants: Histories of Christian Life in America, twelve scholars use theories of practice to construct a broad narrative of Protestant religion in America. The idea for the book came out of the History of Christian Practice Project, which was inspired by the trend towards “lived religion” in the study of American religion. This trend, often closely identified with the work of Robert Orsi and David Hall, suggests that studying lived religion can help scholars under­stand how everyday people experience religion outside of church or creed. The editors of Practic­ing Protestants clearly want to build on Hall and Orsi’s work and focus specifically on the issue of practice. In doing so, they enrich the study of lived religion as a whole.

Editors Laurie Maffly-Kipp, Leigh E. Schmidt, and Mark Valeri introduce the reader to various theories of practice, mainly drawing on the work of Catherine Bell and Pierre Bourdieu. These two theorists recognize practice at its core as a social construct of both discipline and control. The edi­tors also incorporate the work of constructive theologians and scholars, such as Dorothy Bass and Craig Dykstra, who offer “a different purchase on the significance of religious thought and sym­bolism within communities of faith” (3). In order to thoughtfully combine both theories of practice and theological perspectives, the editors make the case that “Protestant theorists of practice need history, because it provides the sources for those foundational habits and patterns of action… but of course, they need histories of a particular kind” (5). They set off to construct a history of Protes­tant practice in America grounded in both theories of practice and the study of religion. No other book of this kind has merged both disciplines.

The book is arranged chronologically and divided into four parts, each focusing on a specific time period and theme. This organization allows the reader to see how different practices came and went during specific eras of American history. While the essays interconnect in terms of their understanding of the construction of practice, they also read well alone, offering insights into a particular group or a particular religious practice. Since all of the essays are relatively short, they would make wonderful fodder for discussion in a survey course on American Christianity or American religions.

To their credit, the editors cast a wide net on “Protestantism” and focus on a variety of topics in order to include ethnic minorities and groups that some people would not consider Protestant, such as the Church of Jesus Christ of Latter-day Saints. The book begins with a section entitled “Puri­tan and Evangelical Practice in New England, 1630-1800,” which contains an essay by Catherine Brekus on Puritan devotional writing as well as Mark Valeri’s work on the practice of forgiveness. Brekus begins with Sarah Osborne, who was emblematic of Puritan believers who “saw diary writing as a deeply meaningful discipline that could bring them into Union with the Divine” (19). Through Brekus’ exploration of devotional writing, the reader gains a sense of how Puritan believ­ers struggled over the issues of sin and grace as they embarked on their own religious journeys. But Brekus does not leave Puritan anxiety over their own personal religious growth in a vacuum. Rather she convincingly argues that the use of devotional diaries has grown among modern-day Protestants, who use the tools of the past to address present-day religious struggles.

For me, Part II of the book, “Mission, Nation, and Christian Practice, 1820-1940,” was the most fascinating, mainly because of its diversity, in terms both of the groups of people studied and of the consideration of practice. In “Assembling Bodies and Souls: Missionary Practices on the Pacific Frontier,” Laurie Maffly-Kipp examines how Mormons practiced their missionary work in the Hawaiian Islands. Some historians might be wary of designating Mormons as “Protestant,” but Maffly-Kipp deftly compares them to other Protestant missionaries stationed in the same area. In doing so, she solidly argues that one should study Mormons under the rubric of “Protestant practice.” Michael McNally and David Koo include two groups in their essays that are usually viewed as outsiders in American religion: American Indians (in this case, Ojibwes) and Korean Americans. Their work shows how practice can transcend culture – as a way to honor Ojibwe elders and to show deference, and as a method for nurturing religious nationalism in a strange land. Yet, by looking at these two forms of practice, they also show that both of these groups, much like Mormons, cannot truly be considered “outsiders.” The study of American religion has an immense amount to learn from the particular practices and histories of these groups. The last essay in the section, “Re-forming the Church: Preservation, Renewal, and Restoration in American Christian Architecture in California,” by Roberto Lint Sagarena, looks at the inextricable link be­tween Protestant identity in California and the practice of restoration and preservation of mission architecture.

Part III, “Devotional Practices and Modern Predicaments, 1880-1920” focuses on what schol­ars might consider a more “traditional” view of practice in the form of common Christian devo­tional practices: Heather Curtis writes on religious healing or “acting faith;” Anthea Butler examines Pentecostal sanctification; and Rick Ostrander looks at the use of prayer among both liberals and fundamentalists in the early twentieth century.

Part IV closes the book by turning to “Liberal Protestants and Universalizing Practices, 1850-1965,” with essays from Leigh Schmidt, Tisa Wenger, and Sally Promney. These authors trace the history of “universalizing practices” – the merging of practices from various world religions in order to create new practices – in mainline Protestantism. Wenger’s essay, for example, explores the decision of a rector at a New York Episcopalian church, who drew inspiration from several world religions, to develop liturgical dance as a distinctly Christian practice. Indeed, Wenger’s subject of study, Reverend Guthrie, believed that these practices would eventually “save Christianity,” and she “insisted that all world religions were important for the revitalization of Christianity” (242). The work of Wenger and her colleagues in this section sheds light on the early historical roots of universalizing practices in mainline Protestantism and connects them to the resurgence of those practices in the twenty-first century.

The variety of subjects in this book is vast – from devotions to dance, from architecture to nationalism. The authors have clearly and convincingly expanded the usage of “practice” from the common Christian conception, typically limited to rituals such as Christian devotionals, services, and pilgrimage, into areas such as dance, architecture, and nationalism. All of the essays include work with either archival or ethnographic materials, and all are clearly – in fact, superbly – written. Practicing Protestants will be an important and useful tool for both scholars and students of American religion for many years to come.