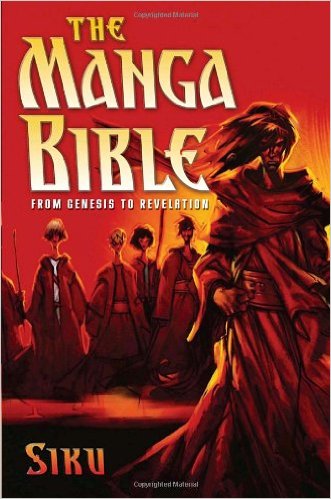 A number of popular web- and print-based versions of the Bible have emerged recently. The Bible Illuminated, for example, is a glossy Bible designed to look like a fashion magazine. The LOLcat Bible is part of a “translation project” dedicated to rendering the Bible entirely in the alternately disturbing and cute web-based language of the same name. The Brick Testament retells biblical stories in the medium of legos. The Manga Bible, by British Christian Ajin-bayo Akinsiku, a.k.a. “Siku,” translates the Bible into the sh?nen or action-based, usually male-oriented, genre of Japanese comics.

It’s tempting to see these renditions of religious scripture as subversive, or at the very least as tongue-in-cheek. According to Timothy Beal, The Manga Bible marks the advent of “the end of the Word as we know it, and the end of a certain cultural idea of the Scriptures as a book, as the Book” (New York Times, February 10, 2008). In an article on the BBC’s news website, these new versions of the Bible are described as “radical presentations of the Bible,” and the author suggests that they might “provoke tuts and headshaking in the pews” (BBC News, November 27, 2008). I doubt it. As a measure of the place of the Bible in popular culture, The Manga Bible indicates no real change. Popular representations of biblical stories have always existed alongside Christian iconography, mosaics, picture Bibles, and stained-glass windows. In 21st-century America, cartoon Bibles are widely used for religious education, and Jack Chick comics depicting biblical stories are distributed to warn people about the threats posed by homosexuality and Dungeons and Dragons. Even some of the most fervent proponents of Biblical inerrancy use translations rendered in popular, colloquial English without fear of any sort of challenge to the authority of “the Word.”

Still, when I picked up The Manga Bible, I hoped that it might salutarily fuse a genre that has at times produced difficult narratives and fantastical imagery with a collection of sacred texts whose own unsettling other-worldliness, contradictions, and representations of inexplicable violence remain only obscurely known to the average American reader. The Bible is so ubiquitous in 21st-century American culture that readers easily overlook what a strange and disturbing book it can be; its stories, I think, could stand to be made unfamiliar. Some satisfying results to that effect have come about in instances where creators of Japanese manga and anime have worked in the opposite direction, putting the bleak and challenging world of the Bible to work in their own alienating, apocalyptic narratives. Death Note, for example, and Neon Genesis Evangelion come to mind. As I began reading The Manga Bible, however, Death Note came to mind less than some of the less inspiring and more calculatingly evangelistic fusions of Christianity and popular culture that one might find, for example, at a Christian rock festival. Rather than illuminating the myriad of strange beings and disturbing narratives that populate the Bible with resources drawn from a popular form well suited to the task, Siku, like some “Christcore,” or Christian hardcore, bands that I’ve seen, manages to elide the difficult aspects of both the form in question and the biblical text in favor of a safe, sellable cultural product that has all the trappings of “edgy” popular culture with only a hint of its alienating force.

The Manga Bible is full of the good-humored, colloquial language that is routinely celebrated in Disney movies. “Cool!” says Adam when he sees the two trees planted in Eden; “Wassup bro? I’ve got something I want to show you in my farm,” Cain says to Abel before murdering him; “… It’s on!” an enthusiastic Joshua exclaims two short panels before we see the dead Amorite kings hanging from leafless trees. Siku seems to want to emphasize biblical violence while securing it in the warm and familiar tone of elementary-school vernacular, which results in some disconcerting, if uncomfortably funny, incongruities. The Book of Revelation, for instance, is presented as a dream, or perhaps a nightmare, experienced by a doubly pony-tailed little girl named Petra. In the last panel of The Manga Bible, this diminutive avatar of the apocalyptic seer—having just witnessed the four horsemen emerging from the sky, the false prophet drowning in a lake of fire, and what looks like a tidal wave destroying New York City (one of many such inexplicably anachronistic images in the book)—awakens with an exclamation mark over her head and an open Bible lying next to her. The image could stand for the book’s entire presentation: this Bible is potentially nightmare-inducing, but in a cartoony, fun way that is safe for young children while still enough like mainstream movies and comics to appeal to young adults. The real horror of the wholesale slaughter of humanity in the final pages of the Bible is circumscribed by the exclamation point stamped adorably above Petra’s wide-eyed look of wonder.

Nevertheless, The Manga Bible raises some interesting questions. For example, its generic context subjects the Bible to certain modifications. Siku’s use of the sh?nen style for the entire Bible with the exception of the book of Ruth, which is written in thesh?jo style, results in an emphasis on action and war narratives. He represents biblical characters as bounding, striding, grasping swords dripping with gore, and dangling decapitated cartoon heads from their bloodstained hands. The characters also seem to have been sexualized to the extent that they would not look out of place on a website like cartoonporno.xxx. Exorcism is represented as magical combat, and Paul’s trip to Damascus is interrupted by what looks like a flash bomb complete with an onomatopoeic “zzaarrrrk!” The Sermon on the Mount and a lot of the prophetic texts are absent from the book, as is the widespread biblical emphasis on matters of economic and social justice. The battle narratives in Joshua, Judges, and Kings are prominently featured, however. The only passage from the Psalms (Psalm 18) pictures David leaping around with a submachine gun in each hand.

The book also begs the question of whether and to what extent the Bible can be read as fantasy literature. Siku’s rendition includes a wide variety of images drawn from that genre. He draws King Jabin of Hazor like one of Tolkien’s Nazgul, as a specter invisibly filling out an elaborate suit of armor. Og of Bashan is ogre-like. The “superapostles” from Paul’s first letter to the Corinthians resemble the undead. There is something apt about rendering the supernatural with resources from fantasy. At the same time, the specific effects of this rendering must be critically analyzed, beginning, I think, with Siku’s depiction of biblical literature’s mythical and historical antagonists as monsters.

Overall, the pre-critical attitude that Siku takes toward both modern popular culture and the Bible keeps The Manga Bible from being the kind of challenging, fantastically-inflected dislocation of biblical stories for which one might hope. Siku has not created anything more subversive than a fun and readable collection of cartoon Bible stories.

By Thomas Fabisiak
Thomas Fabisiak is a doctoral student at Emory University's Graduate Division of Religion in the Comparative Literature and Religion course of study.