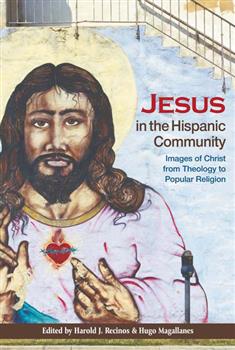 The collection of essays that comprise Harold J. Recinos and Hugo Magallanes’ edited volume, Jesus in the Hispanic Community: Images of Christ from Theology to Popular Religion, develops by responding to critiques made of U.S. Latino/a Christology. This volume is partly a response to two major critiques made of Latino/a Christology. The first and primary critique is made by Michelle A. González in the Handbook of Latina/o Theologies; she charges that Latino/a Christology has avoided central Christological concepts such as “atonement, the scandal of particularity, triumphalism, and the question of redemptive suffering” (172). This first critique accounts for the much larger Part I section on constructive theology; Part II is on popular religion. The second critique is directed at Virgilio Elizondo’s Christology as it is presented in Galilean Journey: The Mexican-American Response; the charge is that his Christology is based on a non-historical Jesus and an anti-Jewish reading of Galilee. The volume begins with a response to this second critique.

This volume is intended to spark theological reflection among U.S. Christians from all cultural backgrounds by inviting them to cross cultural borders and take in the diverse experience of Latino/a Christians. It also seeks to advance the study of U.S. Latino/a Christology by “deepening its dialogue with New Testament scholarship,” engaging the “classical Christological themes that have historically shaped Christian discourse,” and taking into account women’s Christological reflections (xiii). As each of the twelve leading U.S. Latino/a scholars rethink Christology from their specific cultural lens and that of the U.S. Latino/a communities with whom they theologically reflect, two principle tenets of the Christian tradition recur: 1) “the Word became flesh and lived among us” (John 1:14) and 2) whatever is done or not done to the “least of these” is done as if to the Son of Man (Matthew 25:31-46). Though these Christological themes are brought to life in ways that reflect the richness found in U.S. Latino/a Christian experience, Virgilio Elizondo reminds the reader that the Christologies of Mexican Americans and other U.S. Latino/as are in no way intended to replace other Christologies but are intended to “contribute to the growth and development in the appreciation of the full mystery of Christ” (4).

In the first essay of the book, Elizondo continues to build on the particular contribution that a Mexican American mestizo identity brings to Christology as well as to the larger “Christian understanding of the human story” (4). The second essay, written by Michael E. Lee, more directly responds to the critiques made against Elizondo. Lee clarifies that Elizondo’s Christology does not attempt to build on the historical Jesus and cannot therefore be charged as grounded in a non-historical Jesus. Instead, the Christology presented is based on the “historic” Jesus—on the man who is from Galilee, a place theologically and symbolically representative of marginality (28). As such, Elizondo’s Christology in Galilean Journey does not actually advance an anti-Jewish Jesus but presents Jesus as a “faithful [Jewish] dissenter” from the marginalized city of Galilee. The attention given to Virgilio Elizondo’s contributions to Christology and the serious manner in which the critiques against his work are addressed are excellent examples of the constructive way in which theologians can improve and build on one another’s scholarship while in no way taking it for granted.

In chapter 3, Ada María Isasi-Díaz brings attention to the centrality of familial relations in U.S. Latino/a people and the way in which this is brought to bear on how Latino/as come to understand who Jesus is. A mujerista Christology will take into account both that Jesucristo is the Word made flesh within the structure of a divine family and that as one becomes part of God’s family one can relate to Jesucristo with the same intimacy and closeness that one would have in one’s own family.

Loida I. Martell-Otero (chapter 5) looks at evangelical coritos and testimonios (“songs” and “testimonies”) for the way they reflect an understanding of Jesus the Christ as incarnate presence “who ultimately saves because he humanizes [evangélicas] in a world that erases us and casts us aside as surplus people” (75). Jesus is specifically “God made flesh” as sato, a word idiomatically used in Puerto Rico to “refer to a mongrel dog or ‘mutt,’” but here used to bring attention to “Jesus’ non-idealized, concretely historical, peripherally placed, mestizo, struggling, seeking, hoping human being-ness” (77). Zaida Maldonado Pérez also brings up the category of sato when she explores Latino/a titles for Christ (chapter 8) and how titles such as mulato Christ,Cristo Roto (“broken Christ”), and sato Christ speak to “the scandal of difference as something divinely ordained” (124). In different ways both these authors (and others including Hugo Magallanes in chapter 7 and Miguel A. De La Torre in chapter 4) bring richness to the scandal of the incarnation as they highlight the fact that Jesus the Christ specifically identified with marginalized people and social groups (77). Further, De La Torre offers a powerful case for the need to develop Christology from the perspectives and through the experiences of the marginalized. He states,

As long as Latino/as bow their knees to a Christ who is silent about what it means to live at the margins of Euro-American power and privilege; as long as this Christ refuses to motivate action among Euro-American churches to speak out about the marginalization faced throughout the barrios of this nation; as long as this Christ does not elicit Euro-Americans to stand in solidarity with the thousands who die in the Sonoran desert of Arizona because of unjust immigration laws; then those Hispanics insisting on worshipping the Christ who looks and acts like the dominant culture would in fact be worshipping the symbolic cause of their oppression (59).

Taking in these U.S. Latino/a perspectives can spark creative as well as expansive understandings of Christianity while also reversing the habit of focusing solely on Euro-American interpretations of Christ.

Using sociological resources, Arlene M. Sánchez-Walsh (chapter 6) outlines the multivalent Christology that has developed in the “mutual education” process of U.S. Latino/as and Pentecostalism. Through this work, Sánchez-Walsh opens a window to a particular Latino/a Christian community that is too often left out of Christian theological discourse. Similarly, Luis R. Rivera (chapter 9) draws out the implicit Christology born of the “experience of migration and the struggle for life and justice of vulnerable and marginalized migrants and their allies,” which is similarly largely disregarded in the theological thinking of mainstream culture and its mainline churches.

In Part II of the book, the Latino/a voices brought to bear on Christology are complexified and brought to new life through qualitative and ethnographic research methods. The embodied testimonies reported by the three final essays offer the reader various implicit Christologies: the Christology in hymns and coritos that affirms Jesus as a divine companion with whom an erotic connection is possible (Carlos F. Cardoza-Orlandi, chapter 10); the Christology that cannot be authentically developed without “nonconventional ‘texts’ such as music, dance, drama, and material culture,” in this case visual images of Christ (Eduardo C. Fernández, S.J., chapter 11); and a Christology of the risen Christ who is known through the miracles he grants the faithful devotees of a shrine in San Antonio, Texas (Timothy Matovina, chapter 12). As the editors intended, the particular concrete experiences presented in the second part of the volume are vivid examples of U.S. Latino/a contextualized Christology that paint a more accurate picture of the “different dimensions of Christian reality” that make up the U.S. Christian landscape (xxi).

In this volume the reader is given an opportunity to listen deeply to the particular Christian experiences of a people whose perspectives are not often included in the discourse. Here the reader meets communities of people who both suffer and celebrate, who can both dwell with Jesus in the darkness of Good Friday and celebrate the eternally resurrected Christ. And although this cross-cultural, multi-ethnic, mestizo Christology does not make for an easy or comfortable theology, the richness of its contributions far outweighs the challenges and may likely prompt the reader to look more deeply at his or her own cultural and contextual theological roots. The Christology developed in the U.S. is nowhere near the point of having U.S. Latino/a Christian voices participate or be included equitably. This volume must therefore be recommended as a welcome addition to the discourse and will surely serve to spark further theological and pastoral creativity regarding the question upon which Jesus’ disciples are continually called to reflect: “Who do you say that I am?” (Mark 8:29).