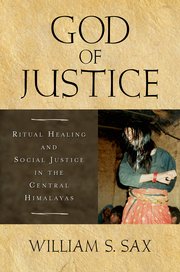 The central Himalayan ranges that run through the contemporary Indian state of Uttarakhand are home to a distinctive cultural region and former princely state known as Garhwal. Regional self-understanding holds that Garhwalis are different from other Indians because they live in close proximity to and in regular direct communication with their local deities, called devtas. William S. Sax’s third full-length ethnographic study of religious practice in Garhwal analyzes ritual healing among Harijan castes in Uttarakhand’s Chamoli district. This latest book helps cement Sax’s status as the foremost ethnographer working in Garhwal, especially by demonstrating the sweep of his knowledge of Garhwali social and conceptual worlds and the scope of his intellectual imagination. God of Justice follows Mountain Goddess: Gender and Politics in a Central Himalayan Pilgrimage(1991) and Dancing the Self: Personhood and Performance in the Pandav Lila of Garhwal (2002), studies of the practices of the region’s other two predominant caste groups, Brahmans and Rajputs, respectively.

In this work Sax argues that the healing rituals that primarily invoke the local deity Bhairav target the field of familial relations as much as the afflicted individual while they simultaneously express the suffering and indignity experienced by the lowest castes in Garhwal. The core chapters of the work are flanked by an introduction and postscript that conduct the spirited defense of ethnography as a field catalyzed by profoundly moral concerns that is now characteristic of Sax’s project. In the first chapter, he responds to two common accusations against ethnography: the moral critique charges that it speaks in an objective narrative voice that erases the ethnographer’s positionality and obscures the collaborative character of all ethnological research; the post-colonial critique charges that ethnography conducts an indecent trade in the exotic. Confounding these stereotypes, Sax discloses much about the contexts in which this research was conducted, and he underscores the discipline’s moral quest for the common humanity of subject and ethnographic object while confessing (at one point, with a well-chosen anecdote about a purloined flashlight) his conflicted sensibilities about the “economic and political asymmetries” that trouble his own research and are the real ethical challenges to ethnography (20).

Sax devotes two chapters to the character, origins, and iconography of Bhairav and to the purpose and performance of the rituals themselves. Although there is some overlap in their mythologies, Bhairav of Garhwal’s Harijans is not identical with Bhairava of the Sanskrit Puranas, and so Sax draws from songs known almost exclusively among Harijans that are rarely sung in the presence of others and that celebrate Bhairav’s defense of his children, members of society’s lowest castes. Bhairav is primarily known, however, to both Garhwalis and ethnographers, not through written text but through the embodied forms he assumes when he possesses both his oracles (in order to diagnose the root causes of affliction) and others (in whom he, like many other devtas, dances).

Oracles and gurus, the two categories of ritual healing specialists that Sax identifies, are distinguished by their passive and active relationships to the devta, respectively. Oracles are the god’s “patients,” the vehicles through whom the god conducts consultations that determine curses, ritual errors, or ritual oversights that cause illness or conflict and prescribes effective strategies for placating an afflicting spirit or countering a curse. The guru is an “agent,” commanding spirits to reveal their designs and do the client’s bidding. While Sax maintains that agency in healing rituals is distributed along complex interpersonal networks and in many respects is collective, he more radically argues that devtas themselves are “authentic social agents” because “people assume that such agents exist, and they act in accordance with these beliefs” (134).

Devtas (and other, lesser spirits that Sax discusses) are intimately associated with discrete sites among the ravines and mountaintops of Garhwal and particularly with the shrines called thans that house their presence and, in Bhairav’s case, also his bahiyals, fierce denizens he deploys on behalf of those who seek justice. Devtas are, moreover, allied with the individuals and families that worship them and who establish their thans. Land, person, and deity are therefore intimately linked and “mutually constitutive” (90). In consultation with the client the oracle reads their histories and relations in order to identify the transgression—whether recent or long-past, intentional or accidental—that has disturbed harmonious relations among these parties. The cult of Bhairav spreads when someone sends him via curse to afflict another and the victim establishes a than to satisfy the devta, when someone acquires land on which Bhairav already “lives,” or when the daughter of a family who worships him moves to her marital home and brings him with her. Bhairav is particularly protective of his Harijan dhiyanis, or outmarried daughters, probably the most vulnerable segment of Garhwali society.

The social, religious, and economic importance of the joint, patrilocal family unit in the region of Garhwal would be hard to exaggerate. The scarcity of farmable land and the tremendous human effort the production of food on steep mountainsides requires place a great deal of pressure on extended families to remain together. As elsewhere throughout north India, however, where similar family systems prevail, the extended family here is, for many of these same reasons, perhaps the greatest source of interpersonal tension and conflict. The strongest element of Sax’s book—and what will be of greatest interest to those working outside Garhwal—is his examination of the role of the family in ritual healing and in the production and alleviation of affliction attributed to supernatural entities. It is here that Sax is at his subtlest, displaying the tremendous nuance with which his decades in the field shade his portrait of the family system, the texture of his relationships with his subjects, and the palpable reality of devtas and other spirits in the everyday world of Garhwalis. When families quarrel or split, curses and counter-curses may fly across the generations, and family deities are always implicated. In these cases the healer’s tactic is typically integrative and strives to reunite the family. The oracle’s clients may, however, pursue less noble goals, attacking their afflicter with the aid of the devta while fashioning their aggression as a necessary defensive move to avoid acknowledging the immoral character of the deed.

My own ongoing research suggests that the cohesiveness of Bhairav’s cult presented here is more a product of the ethnographer’s art than Garhwali social reality. Bhairav is also worshipped by the region’s high castes, and we could learn much by coming to know how these different groups regard, participate in, or refashion each other’s deities and their cults. More importantly, Scheduled Castes throughout the region worship the “high” gods and goddesses associated with the Sanskrit tradition with increasing regularity, an indication of the shifting religious landscape in Uttarakhand that was surely in evidence during the late 1990s when Sax conducted this research. Social relations between and among castes show the signs not only of the internalized hierarchy he describes but also of changing attitudes and practices on all sides that I associate with the rise of Dalit politician Mayawati and the BSP party during the days when Uttarakhand, which achieved statehood in 2000, was still a part of Uttar Pradesh. I sense an essentialized Garhwali Harijan in the text as well as a more systematic healing cult than I see in neighboring Uttarkashi District, where, for example, oracles are hardly passive vehicles but independent entrepreneurs and where a variety and fluidity of rites point to the creative improvisations of healers in a rapidly changing social and economic climate.

In striving for transparency about how ethnographic knowledge is produced, God of Justice unabashedly parades the swaggering male ethnographer at work—swigging country liquor with the local riff-raff, negotiating mountainside rubble at midnight with a sprained ankle, cursing the damp and the cold from the floor of a hut while writing fieldnotes . . . and swigging more liquor somewhere else. Even if Sax never balances the personal, expository, and analytical narratives as perfectly as he does in Dancing the Self, we see the ethnographer cringing at the privilege and embarrassed by the hospitality that together make his work possible while he continues, undeterred, to develop his critique of Euro-American modernity and its conceptions of humanity and the world through sharp theoretical insight and through his finely wrought counterpoint to those conceptions, the richly inhabited and tightly networked cosmos that is Garhwal.

By reading the jacket or portions of the introductory material, one might expect a somewhat different work than God of Justiceturns out to be. It is not a book about untouchables or untouchability, although the indignities and poverty that being Harijan in Garhwal entails are key contextual factors that Sax does not overlook. Nor is it a book about Bhairav, who only informs one thread of the narrative and whose larger place in Garhwali Hindu lives is never clear. It never, moreover, offers a careful statement of the ways Garhwal is and is not part of Hindu India. This is, however, a compelling ethnographic work, rich in instructive narrative and strategic in its invocation and critique of anthropological theory.