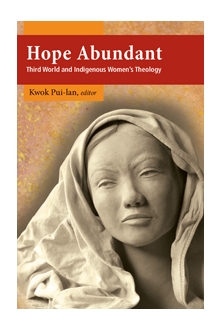 Suppose that you are sitting at a round table where Third World and indigenous women liberationists are sharing their wisdom of God and stories of liberation and survival from the harsh realities of injustice. By listening to their embodied wisdom, arduous work for justice, and articulation of God’s presence here and now, you may learn that differently from what Western liberalism claims, all human beings and living creatures are interconnected to each other and yearning for liberation from the broken world. These women might tell you how they have empathized with the suffering—both human and in nature— and have healed the broken relationships in the world. Their stories would be transposed into hope for the world, humanity, and God, whose promise of a kin-dom of love and justice has been remembered from generation to generation. Hope Abundant offers this rare opportunity for the readers to sit at the liberative round table discussion hosted by Third World and indigenous women.

As Kwok Pui-Lan articulates, our globalized world contests the binary opposition between the global and the local, between the center and the margins, and between the First World and the Third World (9). Therefore, the diverse feminist theologies introduced in Hope Abundant are not voices from an exotic world or the wilderness. Rather, they are our own struggles to recover the image of God within God’s entire creation. Postcolonial reading of the scripture, nonviolent peacemaking activism and spirituality, and critical analysis of Christian triumphalism are all interwoven together in this book, challenging the readers to contemplate who we, as humans, are and what kind of world we hope to establish. Those who are familiar with theologies from the margins may find Hope Abundant to articulate the persistent injustice of poverty, patriarchy, militarism, and (neo)colonialism and yet also to analyze new forms of injustice as well as to envision intergenerational hope grown out of women’s rich resources for doing theology. For those who are unfamiliar with the Third World or indigenous socio-political contexts, Hope Abundant offers a mirror to reflect on their faces. This mirror does not create a boundary between us and them but challenges the First World to contemplate how its salvation can be completed through Third World struggles for liberation. For these reasons, Hope Abundantcan be appreciated by anyone who seeks truth of God’s love and justice and who values women’s rights as human rights.

This book organizes the essays thematically rather than according to contents. The four themes (Context and Theology; Scripture; Christology; and Body, Sexuality, and Spirituality) enable the readers to compare similarities and differences among Third World and indigenous women’s critical methodology, practice of spirituality, use of the Bible, articulation of Christology, and understanding of the body and sexuality. By focusing on these themes, the readers can avoid reducing women’s struggle and liberation to continental categories or racial/ethnic identities. For example, Hope Abundant introduces four African women’s essays, each assigned to one of the four themes respectively. Although Musimbi R. A. Kanyoro, Musa W. Dube, Mercy Amba Oduyoye, and Isabel Apawo Phiri are each involved in the Circle of the Concerned African Women Theologians, they take different methods, contexts, and social issues for African women’s liberation from patriarchal Christianity, poverty, and sexual oppression. In “Jesus Christ,” Oduyoye, the mother of African feminist theology and founder of the Circle, attempts to offer a liberative image of Jesus drawn from African women’s reading of the Bible and folk tales. Analyzing the historical and political development of the Circle, Kanyoro’s “Engendered Communal Theology: African Women’s Contribution to Theology in the Twenty-First Century” considers the accomplishment of and the future direction for African feminist theology. While Phiri’s “HIV/AIDS: An African Theological Response in Mission” takes women’s sexuality into serious theological and ethical consideration, Dube’s “Toward a Post-Colonial Feminist Interpretation of the Bible” delineates African women’s political identity and struggle as the fertile grounds to read the Bible post-colonially. Read together, these four articles delineate the resources for spiritual, intellectual, cultural, political, and physical liberation for women, and yet, their theological discourses offer different sorts of intellectual engagement with the Bible, theology, and social context. In addition, Dube, a young African feminist biblical scholar, articulates a useful postcolonial method to liberate biblical interpretation from colonialism, which might be applicable to non-African contexts.

Thematically organized feminist theologians’ work also enables the readers to imagine transnational connections among them. While both Kanyoro and Wong Wai Ching Angela contemplate the development of feminist theology and praxis in Africa and in Asia respectively, Andrea Smith’s “Dismantling the Master’s House with the Master’s Tools: Native Feminist Liberation Theologies” critically analyzes the im/possibility of doing theology in the context of Native American women. Smith further questions a Third World feminist method for liberation theology because of its tendency to generalize women’s experiences of oppression and liberation (e.g., Chung Hyun Kyung’s Asian feminist theology). If Kanyoro and Wong skillfully navigate African and Asian feminist theologians’ political re/presentation, Smith articulates the necessity of a native feminist theology with less emphasis on political representation and more on material conditions. Comparing these women’s liberative voices transnationally, the readers may understand how their constructive engagement with each other has pluralized the theologies of the Ecumenical Association of Third World Theologians (EATWOT).

Other fascinating gifts from this book are the essays of some feminist theologians whose contexts or perspectives have not been generally circulated in the United States. Such essays include Meng Yangling’s “Women, Faith, Marriage: A Feminist Look at the Challenges for Women,” which discusses Chinese Christian women’s oppression and liberation within Christianity and rapidly changing China; Carmelita Usog’s “Women’s Spirituality for Justice,” which articulates a Filipina feminist interpretation of spirituality and sexuality in everyday struggle for justice in the Philippines; Jean Zaru’s “Biblical Teachings and the Hard Realities of Life,” which contemplates Palestinian Christian women’s spirituality grown out to committed nonviolent peacemaking; and Lee Miena Skye’s “Australian Aboriginal Women’s Christologies,” which delivers Native Australian women’s Christology, vision of liberation for God’s whole creation, and ecofeminism.

In addition, the readers can make an intercontinental connection, for example, between Oduyoye’s “Jesus Christ” and Clara Luz Ajo Lázaro’s “Jesus and Mary Dance with the Orishas: Theological Elements in Interreligious Dialogue,” in which Lázaro rediscovers the liberative images of Mary and Jesus through Afro-Caribbean religious practices, which have theologically and ritually synchronized Christianity with African religions.

Hope Abundant also suggests that all Third World feminist theologies are not contextual. For instance, Elsa Tamez’s “The Patriarchal Household and Power Relations between Genders” does not focus on the particular identity or context of Mexican or Latin American women. Rather, Tamez analyzes the Pauline code of heterosexist marriage and the patriarchal household as they intertwined with empire-building within late antiquity. The readers might compare her analysis and critique to their own contexts.

Although this book review cannot introduce all seventeen essays from Hope Abundant, I am convinced that all these essays articulate the valuable perspectives on justice and liberation for all God’s creatures. This book is a fine introduction to Third World, native feminist, and liberation theologies, ethics, and spirituality. I hope that after reading Hope Abundant, the readers will delve into other writings of the authors, who contribute to this book.