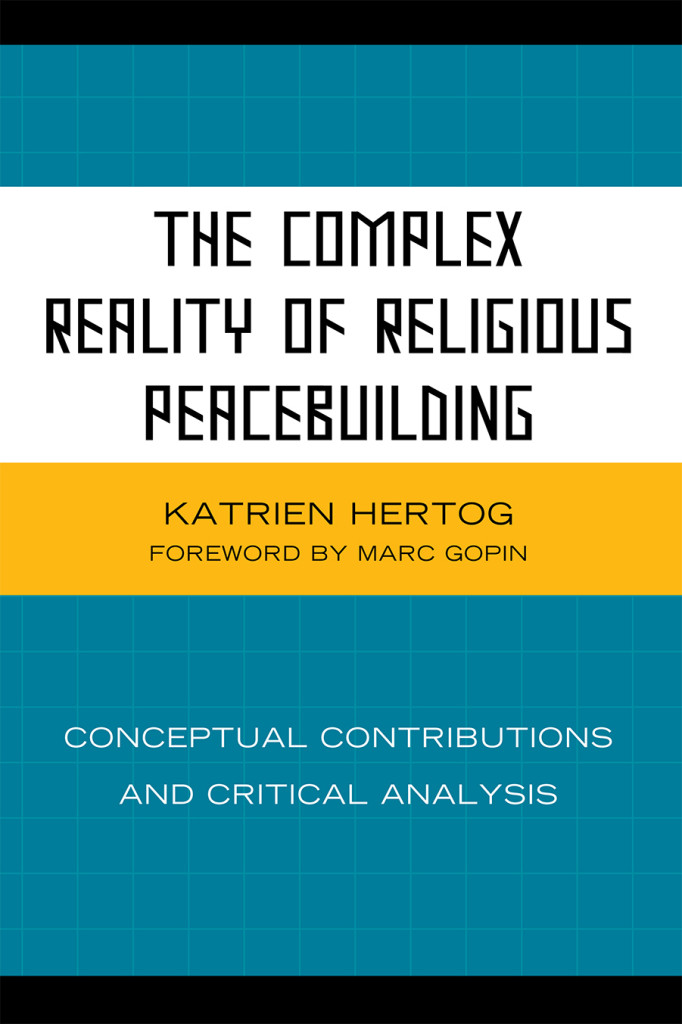 Religious peacebuilding is a curious endeavor given that the role religion plays in conflict is often ambiguous or, upon further reflection, not what it is purported to be. Interpreting religion as either the source of conflict or a resource to mitigate conflict depends, in part, on the orientation towards religion that the individual interpreting the conflict has. There is a sense that much cause of conflict is due to an unwillingness to engage with the religious other and that, in reality, conflicts of religion are not theological in nature but rather a means to increasingly entrench tensions through politicization of religious terminology. Yet regardless of one’s view, theorizing religion as a resource within peacebuilding is far less developed than other subfields of peace studies, a deficiency that Katrein Hertog’s The Complex Reality of Religious Peacebuilding seeks to address.

Recognizing gaps between peacebuilding theory and practice, Hertog’s book argues that certain religious resources can help in moving us towards an environment of sustainable peacebuilding (42). With a brief introduction and conclusion, the book contains three cumbersomely long chapters—both chapters two and three exceed 80 pages—that survey an emerging field within peace studies and provide a good introduction, as it is understood, to the potential of religious peacebuilding. The first chapter overviews the field of religious peacebuilding while the second chapter seeks to provide a conceptual framework that explores the concept of sustainable peacebuilding and the third attempts to give a sense of applicability through a case study of the Russian Orthodox Church.

In offering a survey of ten years of scholarship, Hertog credits publications by R. Scott Appleby and Marc Gopin for creating the field of religious peacebuilding.1 Her indebtedness to these authors, especially Gopin, can be seen throughout the work and sets her within the trajectory of their arguments. Useful as a literature review, the first chapter points to the theoretical deficiencies of the field of religious peacebuilding and fleshes out its heterogeneous character (18). In noting the diversity of those in the field, she mentions the religious contributions of Mennonites (seen in the work of Lederach), Muslims (as articulated in the work of Abu-Nimer), and Buddhists (such as the Dali Lama and Thich Nhat Hanh), arguing that the diversity of these approaches have yet to evolve into a coherent, systematized understanding of religious peacebuilding (39).

While the chapter is intended to establish a framework for analyzing religious resources for peacebuilding, given what is recognized as the importance of individual leaders with the courage to initiate or facilitate directions for peace, it is not clear how this connects to the larger project of religious peacebuilding. Undoubtedly one can make an argument that all religious traditions can be framed or analyzed in ways that show both resources and obstacles to peacebuilding, but if the start for such peacebuilding rests predominately on individuals, why is it that some choose to engage peacebuilding and others do not? Saying, for example, that Islam is a religion of peace is nice but not of primary importance to a jihadist who does not accept the prevailing notions of global order. What is more, one assumes that religious leaders understand the resources available within their own traditions and that what activates their involvement in (religiously-framed) peacebuilding efforts is something other than and in addition to awareness of the resources of their tradition. While it is useful for those interested in peacebuilding to be familiar with available resources, the problem of engagement remains most critical; an outside observer—religious or otherwise—is less likely to inspire change by discussing the resources or potentials of different religious traditions precisely because he or she is an outsider. While The Complex Reality of Religious Peacebuilding is structured as something of an academic handbook, the questions one begs to ask are how and why do local religious people become engaged in local religious peacebuilding?

Hertog’s book does stand as a useful resource for entry into the field of religious peacebuilding, but in pushing the utility of religious peacebuilding, many of the real problems within the field go unexplored. It does not, for example, address the issue of what happens when religious agendas get involved and contradict peacebuilding strategies. There is an attempt to formulate the incorporation of religion into peacebuilding efforts but this formulation leaves one to view religion as something to add into a mixture, e.g., take the “good” of religion and stir it into the existing peacebuilding approaches for a better response. Regrettably, the book does not call into question any of the neoliberal assumptions or agendas that drive the field. Specifically, Hertog advocates something of a cherry-picking approach, stating that we “must examine the respective religious traditions with an eye to identifying appropriate values, concepts, and practices as resources for peacebuilding in that conflict setting” (xvii). Such a statement does accurately reflect neoliberal approaches to peacebuilding, in that “appropriate” is assumed to be part and parcel of democracy and free trade, but harkens back to the orientalist concerns that confounded Edward Said.2