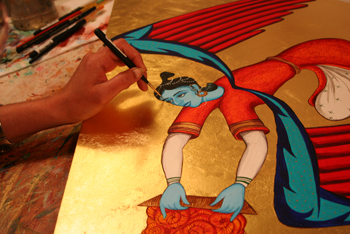 This twelve-minute documentary examines how the practice of the visual arts can involve the religious identities of young people. In this film, created for Practical Matters by independent documentary filmmaker Sonia Narang, an Indian Jewish visual artist works with a group of high school students at the SAR Academy, a modern Orthodox day school in New York City.

As artist-in-residence, Siona Benjamin is creating an exquisite Torah Ark for the school. She asks high school students to create their own artwork based on the prophet Ezekiel’s vision, from the first chapter of Ezekiel in the Hebrew Bible.

As the students create their own paintings and drawings and assist Benjamin with her Torah Ark, they reflect on Jewish identity, their personal aspirations, and why they consider it important to attend an all-Jewish school.

The artist, Siona Benjamin, is a Bombay-born Jew, a descendent of the centuries-old Bene Israel community in western India. Her work explicitly treats Jewish themes, and especially explores what it means to be a international Jewish woman of color. The school, SAR Academy, is a private Orthodox day school in the Bronx.

In this film, is drawing or painting a religious practice?

Siona Benjamin tells the students to “put themselves” into their artwork, “not just illustrate the text.” What difference does that make in what the students produce? Is it possible to hear/read/think about/interact with a religious text without “putting yourself” into it somehow? Why or why not?

What are the implications of housing the SAR school Torah scroll in the Torah ark created by Siona in a very Indian-influenced style? How can/does art blend cultures? Refuse to mix cultures? What does it mean when elements of various religious cultures are mixed and blended?

Siona’s life and work demonstrate the reality that one person can be many things at one time and participate in multiple cultures at once. In Siona’s case, she is Jewish, Indian, a woman, an artist, and so on. How do the students words and artwork reflect this same reality in their own lives?

The Vision of Ezekiel
from Ezekiel, Chapter 1

In the thirtieth year, on the fifth day of the fourth month, when I was in the community of exiles by the Chebar Canal, the heavens opened and I saw visions of God.

They had the figures of human beings. However, each had four faces, and each had four wings; the legs of each were [fused into] a single rigid leg, and the feet of each were like a single calf’s hoof; and their sparkle was like the luster of burnished bronze. They had human hands below their wings. The four of them had their faces and their wings on their four sides. Each one’s wings touched those of the other. They did not turn when they moved; each could move in the direction of any of its faces.