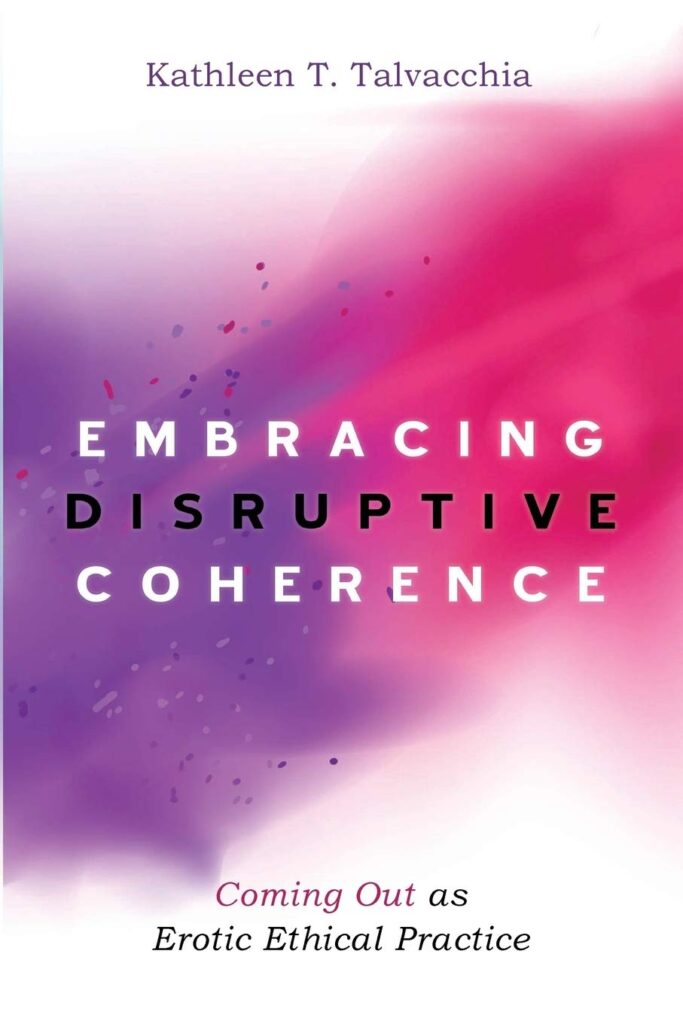 Drawing from both queer theory and queer theology, Kathleen Talvacchia’s recent work situates the act of coming out within Christian practical theology. What does coming out look like in a world where—as queer theory suggests—identities are fluid, relational, and intersectional? Embracing Disruptive Coherence: Coming Out as Erotic Ethical Practice raises and answers this question via a Christian ethical lens. While queer theology has long offered theological justifications and ethical explorations of queer experiences, Talvacchia’s book is unique in its focus on the ethical demands and complexities of coming out itself as a theological act of truth-telling. Her book is in dialogue with a world where intersectional identities increasingly shape and complexify the queer coming out experience.

The book consists of six short chapters. The first chapter situates Talvacchia’s book in her personal dilemma of whether to come out to her Korean immigrant parents-in-law who moved in with her and her partner. This complex dynamic of cultural identity and queer identity prompts Talvacchia to frame modern day coming out practices as a fluid process, rather than a “once-for-all reality” (3). Conversations on whether, when, and why to come out still matter for queer individuals today, as the author’s own story demonstrates. The inclusion of her personal story is an effective way of framing the book in an intersectional and experiential mode of analysis.

The book’s second chapter takes a scriptural turn. Talvacchia follows the example of many other contemporary Protestant constructive theological works by grounding her book in the contextual reading of a scriptural passage. She engages in a queer reading of Luke 4:16-30, the rejection of Jesus at Nazareth, to suggest a parallel between Jesus’ self-disclosure of identity to the coming out experience. Coming out is a relational act that comes with risk, she concludes through a close reading of the passage. From there, she begins to frame her analysis of the coming out process in the categories of disruption versus coherence, and instability versus stability—implying that all four could be present in the experience of coming out.

Chapter three, “Toward Erotic Ethical Practice,” serves as the literature review section of Talvacchia’s book. While I found this chapter to be the most fragmented chapter (in terms of structure) of the book, the comprehensiveness of the literature review of both queer theory and queer theology may be helpful for those who are unfamiliar with the fields. Talvacchia teases out how coming out is viewed within various queer theory and queer theology texts. Using these existing theoretical works, she suggests that coming out is not the “expression of a hidden, inner essence” of oneself (59), but a practice of truth-telling and testimony.

In chapters five and six, Talvacchia expands upon the notion of coming out as disruptive coherence, suggesting that the term resists both “destructive disruption” (disintegration of social relationships) and “controlling coherence” (integration at the cost of hiding part of oneself). At its best, coming out ought to be both disruptive and coherent: it disrupts existing hierarchies via truth-telling, while preserving sacred social relationships and integrating one’s whole self in its many identities. Concluding her book, Talvacchia encourages queer individuals to ask, as part of their discernment of coming out: what does justice demand in this situation?

Embracing Disruptive Coherence adds to the existing voices within the field of queer Christian ethics. Along the same vein as Margaret Farley’s Just Love: A Framework for Christian Sexual Ethics (1992), Marvin Ellison’s Making Love Just: Sexual Ethics for Perplexing Times (2012), and many other texts, these LGBT-inclusive Christian ethics mark a move in Christian theology from LGBTQ-affirming theological apologetics to sexual ethics that center the queer embodied experience. In other words, they do the critical work of reimagining a Christian sexual ethics beyond a heteronormative framework.

Talvacchia’s work pushes this field further toward a relational turn, as the book centers relationality—both within oneself, and between self and other—embedded in the coming out experience. At times, I wished that this relational focus of queer theology could have been explored deeper in the book. Given the multicultural nature of the author’s own story, perhaps a deeper investigation of non-western theologies of the self and of relationality would have added to the author’s already intersectional argument.

Overall, the book is more practical than purely theoretical. Talvacchia incorporates modern day examples of queer and allied Christians such as Sister Jeannine Grammick of New Ways Ministry, and the United Methodist Church LGBTQI clergy in their activism and ministry that embraces this “disruptive coherence” that Talvacchia theorizes. These examples enflesh the occasionally esoteric concepts that Talvacchia brings forth in her book (such as the overtly academic meaning of “erotic” that her book incorporates) and allows them to become meaningful for scholars and practitioners alike who may not be familiar with queer theology. As such, the book would be a particularly good resource for those who work in Christian ministerial settings with queer populations, and all those who wish to deepen their understanding of Christian ethics from a queer-centric framework.