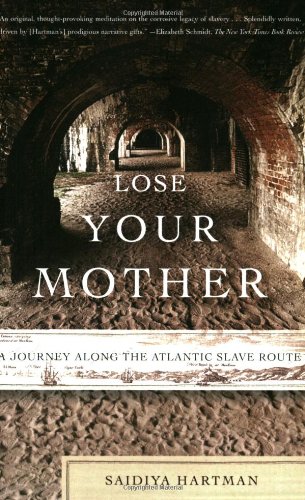 If you ever lost a home, longed for home, or sought a reconnection with a spiritual or physical home, Lose Your Mother: A Journey Along the Atlantic Slave Route will articulate the words that may rest in your heart. A mixture of history of the slave trade and its ongoing effects from both sides of the Atlantic, personal memoir, and testimony, Hartman’s book immerses us in the human anguish, betrayal, and greed that led to trafficking in black bodies. It also challenges us to realistically assess our conceptions of home and the desires for belonging that veil realities. In her opening, Hartman observes, “Torn from kin and community, exiled from one’s country, dishonored and violated, the slave defines the position of the outsider. She is the perpetual outcast, the coerced migrant, the foreigner, the shamefaced child in the lineage.” (5).

Hartman, an English and comparative literature professor at Columbia University, interweaves her academic research on the lost routes of the slave trade with her personal search, as an American descendant of enslaved Africans, for home on the mother continent. Her family’s encounters with racism in the Jim Crow south, their diverse perspectives on how to survive systemic racism, as well as the national story of Hurricane Katrina’s exposure of racism’s ongoing effects keep us focused on America’s original sin, the building of a nation on the backs of enslaved Africans and their descendants. These stories also speak openly of the feelings of betrayal and lack of home many Americans of the African diaspora experience.

On the African side of the Atlantic, Hartman explores the history of the slave trade among Africans and the impact of European slave traders as she takes us inside holding dungeons and onboard trafficking ships. She notes the diverse opinions of American ex–patriots on life in Ghana. She also shares perspectives of native Ghanaians who view African-Americans’ longings for an African home as everything from sorrowful to fanciful. Some Ghanaians even view it as ingratitude for the American lifestyle which the descendants of enslaved Africans are believed to have inherited. Hartman states, “chance encounters in the street made plain the difference between how I saw myself and how I was seen by others. In my estimation, I was the aggrieved; to others I was a privileged American and as such was required to perform regular acts of penance.” (56).

Hartman never lets us forget the diversity of perspectives on both sides of the Atlantic on the ongoing effects of slavery. She warns of history’s combination of fact and fiction, again depending on perspective, in the sharing of stories on how we came to this point on the journey. Referencing Foucault’s musings on history’s lack of “providence or final cause,” Hartman avers, “the perilous conditions of the present establish the link between our age and a previous one in which freedom too was yet to be realized. The past is neither inert nor given. The stories we tell about what happened then, the correspondences we discern between today and times past, and the ethical and political stakes of these stories redound in the present. If slavery feels proximate rather than remote and freedom seems increasingly elusive, this has everything to do with our own dark times” (emphasis in original) (133).

In the Prologue, Harman explains the concept of “obruni,” which means stranger. It is a term by which she is often referred by Ghanaians and a constant reminder of her status in Ghana. She also begins sharing the stories she heard growing up about her own family’s history of enslavement. Chapter one includes an overview of the years surrounding Ghana’s independence from the British Empire. In chapter two, Hartman visits the Elmina slave castle, which was built by the Portuguese in 1482. She shares stories of Elmina’s emergence as a major slave market and of the torture that would be its progeny. Hartman’s family history is prominent in chapter three along with the beginnings in 1700 of the Dutch dominance of the Gold Coast trade in human flesh. As Hartman describes the modern-day tourist trappings of the castle in chapter four, she interweaves stories of enslaved people seeking a way to return home through slave revolts. A brief focus on African-Americans or “The Tribe of the Middle Passage” as Hartman titles chapter five precedes two of the book’s most heart-wrenching chapters. Chapter six describes in detail the conditions of enslavement in the castle’s dungeons. Chapter seven relays the unimaginably brutal death of a young woman on board the slave ship Recovery, for which its captain was tried for murder. In chapter eight, Hartman addresses the spiritual and other ways in which slavers sought to tear the enslaved from memories of or longing for home. She also explores the ways in which Ghanaian governments have moved from trying to disassociate the country with the slave trade to embracing the tourism dollars that come with welcoming the obruni “home.”

After a brief story in chapter nine arising from Hartman’s experience with Ghanaian power outages, she journeys to Salaga, north of Accra, in chapter ten. Titled “The Famished Road,” the chapter takes us back as 18th and 19th century travelers on the roads that led captured Africans from what is now Nigeria and Burkina Faso to the Salaga slavemarket. “Salaga was the grand emporium of the kingdom of Gonja and the crossroads of a traffic in slaves, which traversed the Sahara and extended as far south as the Atlantic coast. The trans-Saharan, transatlantic, and African trade all fed upon the northern territories of Ghana.” (181).

Chapter eleven’s brief discussion of blood cowries, which were shells used to purchase individuals from African traders, connects the economic motivations of the slave trade on both sides of the Atlantic with subsequent economic devestation in parts of Africa. It also serves as a bridge to connect Hartman’s earlier Salaga journey with her later return as part of a research group in chapter twelve. The research group consists primarily of Africans and Hartman’s interactions with them explores the isolation and otherness that can exist for African-Americans as ones connected to, yet distinct from, colleagues of African nations, especially when addressing issues of slavery. Hartman observes that “on the really bad days, I felt like a monster in a cage with a sign warning, ‘Danger, Snarling Negro. Keep Away.’ And my colleagues did…. Most of my colleagues didn’t experience slavery as a wound, at least they feigned that they didn’t. A terrible history had not begun for them in 1492 that had yet to end. And if they believed this was the case, they refused to admit it.” (215). Hartman closes the chapter and the book with the group’s trip to Gwolu, a community whose ancestors had run from slave-trading African states. Hartman’s description of their journey and survival brings forth thoughts of the Exodus, of migrants today, and of myriad ways humans yearn for freedom. She reflects, “The bridge between the people of Gwolu and me wasn’t what we had suffered or what we had endured but the aspirations that fueled flight and the yearning for freedom.” (234).

Hartman’s work provides a treasure trove for preachers seeking ways to explore the concept of and intricacies in defining home in the minds of a people, whether in 15th Century Ghana, 21st Century America, or the biblical lands of ancient Egypt and first-century Palestine. Her work also abounds with treasure for pastors and educators seeking an engaging novel in which to add particularity to discussions of racism that often lose site of the individual lives it continually haunts. We cannot leave Lose Your Mother without raising questions about home for ourselves, our spiritual communities, and the physical spaces we inhabit. We cannot leave this work without feeling the pains of the past while joining the ongoing yearnings for legacies, nations, and freedoms, we can call our own.

Cite this article as: La Ronda D. Barnes . "Lose Your Mother: A Journey Along the Atlantic Slave Route." Practical Matters Journal (May 13, 2021). http://practicalmattersjournal.org/?p=4594.