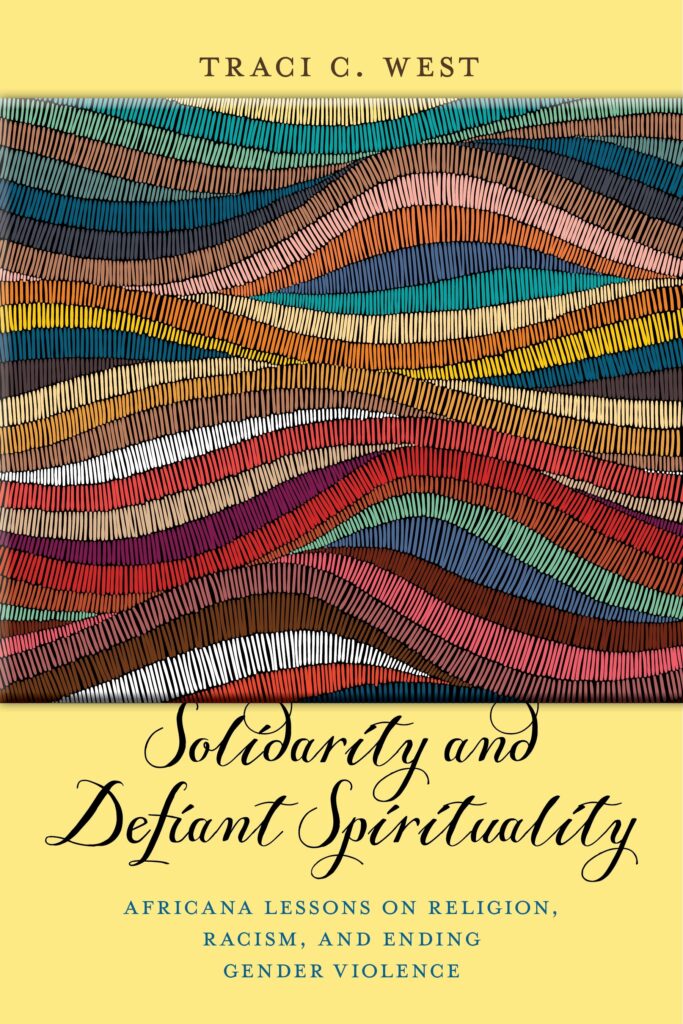 From Covid-19 to police violence, 2020 has made racial and gender inequality more visible than ever before. In fact, as I was drafting this review, news broke that those responsible for the death of Breonna Taylor were only found guilty on one count of “wanton endangerment.” This conviction was not connected to Taylor, who was shot and killed in her apartment, but to a shot fired into her neighbor’s empty apartment. Taylor’s case underscores the logics of a legal system that values property more than the lives of black and brown women.[i] There is perhaps no better time for Traci West’s new book, Solidarity and Defiant Spirituality: Africana Lessons on Religion, Racism, and Ending Gender Violence, which articulates a “defiant Africana spirituality” to counter a world that systematically devalues and commodifies the bodies of Black women.

While West’s main focus is gender-based violence, she interrogates the anti-black racist underpinnings of our world that render Black women and girls everywhere vulnerable to multiple forms of violence. Drawing on a mixed methodology of storytelling, narrative, and ethnographic interviews with transnational activists, West centers the voices of Africana activists who work to dismantle gender-based violence. Her research highlights the need for an “Africana transnational solidarity” to confront a problem that is decidedly borderless (4). Since the transatlantic slave trade, gender-based violence has traversed the globe through white supremacist, racist ideals. From marital rape to sex trafficking to the abuse of domestic workers to assaults on queer and transwomen, West pursues a sweeping project that translates local problems into global alliances. She works to attend to the particularities of intercultural encounters, while addressing the connective tissue beneath the problems of gender-based violence in Ghana, South Africa, Brazil, and her own country, the United States. She selects these countries as sites marked by colonization, slavery, genocide, and other forms of racial / ethnic subjugation.

Her exploration of the racial and religious underpinnings of gender violence begins at her desk. Pouring over newspaper clippings of Black women who have died from gender violence in the United States, West describes deaths that are not isolated tragic events. They occur within a system that disproportionately subjects Black women and girls to violence. From policy initiatives to religious responses, attempts to counter this system are woefully inadequate. West seeks a transnational moral response to address the cultural, political, societal, and spiritual foundations that facilitate gender-based violence (44–45).

West first travels to Ghana—a site she chooses because of its connection to the United States through a shared history of violence and activism (58–59). Careful not to impose a romanticized sameness between herself and the activists whom she meets, West’s conversations with Ghanaian women underscore the importance of religious, cultural, and traditional plurality in moral responses (66–67). She recalls conversations with Muslim and Christian religious leaders who draw on their religious platforms to call out “misogynist biases in their traditions and practices” in all forms of social belonging, not just in the church (67). West describes a nuanced process where these women distinguish between “authentic and inauthentic cultural expressions” (70). They challenge blanket cultural assumptions that protect marital rape, while accounting for the complex, colonial history of the problem (79). West draws on this encounter to reflect on the North American cultural expression of political freedom that ignores or sidelines the history of slavery and anti-black racism (93). Her encounters in Ghana help her problematize the nthat notion of political freedom address the multi-faceted historical roots of gender-based violence.

In her second section, West chronicles her time in Brazil. Here, she focuses on embodiment, vulnerability, and the precarious act of transnational translation. West interrogates the production, maintenance, and re-evaluation of the country’s 2006 Maria da Penha gender violence law. From grassroots activists who tell women about the law to the women that enforce it to the women that demand more from it, West describes the dynamic forms of political and spiritual activism needed to make the law work. In her conversations with Candomblé practitioners, West realizes that naming Black women’s bodies as sacred necessarily merges spirituality and political engagement. In her encounter with organizers for a domestic worker’s federation, she highlights how gender-based violence needs a comprehensive response because it affects women physically, mentally, and spiritually (120). In conversations with community organizers, she depicts the tireless efforts of community organizers to make the Penha law work by demanding more inclusive forms of assistance, such as transportation (131).These tireless efforts often flow from an unwavering spiritual commitment to the inherent value of Black women’s bodies. West also addresses the difficulties of translating Brazilian responses to the United States. For instance, she considers the over incarceration of Black men in her own country when she visits a jail for perpetrators of gender violence in Brazil (129). In conversations with anti-sex trafficking activists, West reflects on the ways that American Protestant values of sin and redemption coupled with consumerism can reinforce the disempowerment of women and girls and fuel the problem of trafficking (143–53).The issues West explores in Brazil are directly connected to her own country through global capitalism and North American Christian teaching. At the same time, though there are stark continuities between Brazil and the United States, West points toward important points of discontinuity. She notes dissonance as a necessary part of translation (157).

In her final section, West travels to South Africa. Her conversations in this section help her describe “defiant spirituality,” and “transnational solidarity.” In discussions on rape, West underscores the nuances of “victim blaming” in both South Africa and the United States. Victim blaming is complicated in an anti-Black racist world, as intragroup solidarity can protect Black leaders from accusations of sexual assault (191–92). But West rejects this notion, calling for a “geographically resistant” solidarity that opens up borders (216).This is the solidarity she finds among queer and transwomen in South Africa. West draws on conversations with these women to articulate a “defiant spirituality” among those who insist on their right to exist across different borders and boundaries. Defiant spirituality does not siphon off different categories of belonging for the sake of political efficacy. One should not have to choose between being queer and Black. West notes that this kind of spirituality does not belong to any one religion. After all, Christianity has often created the conditions for degradation. But defiant spirituality can be a resource for confronting that degradation.

In her conclusion, West calls for a participatory defiant learning process that moves beyond an appreciation of difference. Instead, it looks to the stories like the ones that West highlights as “ingredients of Africana political knowledge and spiritual stamina needed for contesting and ending gender based violence” (225). For West, these encounters recast the systemic and social patterns that foster gender-based violence in her own country. They ignite a “hope that surges outward” and invite a new way of thinking about transnational solidarity (223).

West’s work mirrors this participatory learning. Her work does not provide definitive solutions to complicated problems. She does not truncate the complexity of gender-based violence in favor of a simple answer. Nor does she untangle the overlapping social forces that collude in gender-based violence. The problem is never singular. Gender-based violence is political, social, spiritual, psychological, religious, and deeply historical all at the same time. Our religious responses must be conversant with all areas. Moreover, they must be self-critical. West embraces nuance and ambiguity as she puts forward her own hypotheses and second guesses them through her intercultural encounters. Her writing offers a meditation on solidarity, a musing on what might work and what does not work. This meditation is a method in its own right. Solidarity and Defiant Spirituality offers an approach to solidarity that leans into differences that cannot be translated and draws on complicated, complex spiritual resources. West’s work is situated within Christian Social Ethics. But her approach to transnational solidarity bridges toward other disciplines and non-Christian perspectives. While students and scholars in theology, ethics, and religious studies will appreciate the methodological openings her work provides, readers in any discipline can benefit from the wisdom of West’s interlocutors. Anyone prepared to embrace the uneasiness of solidarity will be grateful for the companionship this book provides.

[i] See Hannah L. Drake, “Black Women Will Fight Another Day. Not Just for Breonna Taylor, but for Ourselves | Hannah L Drake,” The Guardian, September 25, 2020, sec. Opinion, https://www.theguardian.com/commentisfree/2020/sep/25/black-women-breonna-taylor.