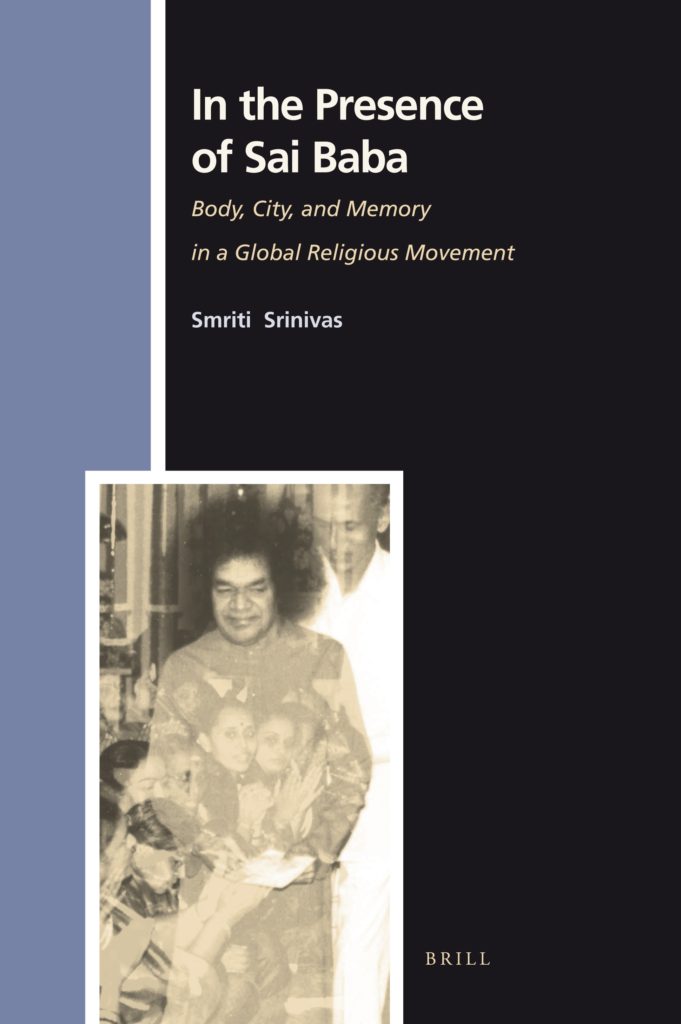 Download PDF: Srinivas, In the Presence of Sai Baba

Throughout her book, In the Presence of Sai Baba, anthropologist Smriti Srinivas explores the relationship between the south Indian religious teacher Sathya Sai Baba (b. 1926) and his internationally-diverse, middle-class, city-dwelling devotees.  She argues that as devotees make sense of their lives as members of a worldwide community of faith and as active citizens in their local communities, Sathya Sai Baba becomes “a pathway for charting the varied cartographies, somatic dispositions, and cultural memories implicated in urbanization and transnationalism” (6).  In the Presence of Sai Baba not only refutes the already outdated prediction about a demystified modernity in which the secular comes to replace the religious, but more importantly, demonstrates how a charismatic religious teacher, a worldwide community of faith, and its devotional practices perform “the sacrality of urban sprawl” (222).

In the Presence of Sai Baba tells the story of the evolution of the global movement following Sathya Sai Baba, from the more Indo-centric religious pluralism developed by his predecessor Shirdi Sai Baba (d. 1918) to a universalistic mission to reestablish love and service.  To this end, Srinivas provides some introductory information about Shirdi Sai Baba, but her primary purpose is to describe the images and memories that Sathya Sai Baba inherited when he proclaimed himself to be the former’s reincarnation in 1940.  Whereas Shirdi Sai Baba mixed elements of a Sufi faqir, Hindu guru, and devotional sant, Sathya Sai Baba consistently adopts the term avatar, a divine being who descends from above at a time when truth and righteousness are threatened.  Srinivas proceeds to argue that his identification as an avatar increases Sathya Sai Baba’s scope of travel and creates a greater capacity to reach devotees, in contrast with an identification as a faqir, guru, or sant.  The avatar is one who travels not in planes or cars, but along devotional pathways, crossing national, linguistic, and religious boundaries to appear in dreams and perform miracles.

After Sathya Sai Baba globalized his mission of love and service in the 1960s, the formerly mud-hut, two-lane village Puttaparthi expanded to become his hermitage and the movement’s symbol of the ideal polis.  Puttaparthi is a new and meticulously planned city that functions to meet both the physical and spiritual needs of its citizens.  For example, the cardiologists, ophthalmologists, and other specialists at the Sri Sathya Sai Institute of Higher Medical Studies (SSSIHMS) treat diseases of the body inside a hospital building that soothes the soul with its gardens, fountains, and a spacious prayer room.  In noting the connection between the preference for holistic medicine and the structure of the SSSIHMS as a temple of healing, Srinivas refers to Puttaparthi as an example of “architecture as rhetoric” (208), which means that the city’s buildings represent values important in the Sai Baba movement.  Srinivas also discusses the Sarva Dharma Pillar, a lotus-capped monument with symbols from various world religions.  Located at the center of the hermitage, the pillar represents the movement’s all-inclusive, nonsectarian mission.  The proliferation of the pillar’s image in Sai Centers worldwide and on the cover of the monthly Sanathana Sarathi publication communicates the movement’s universalistic message that is projected beyond Indian geography and Hindu religion.

Devotees thus negotiate their two identities as members of a worldwide community of faith who live in urban centers like Bangalore, Nairobi, and Atlanta.  Srinivas examines local community service (seva) as the site for the intersection of universal and local communities.  Performing seva, for example, by distributing food to villagers in Bangalore or providing free education to AIDS-affected orphans in Nairobi, is a form of “practical spirituality” (258), a way to enact Sathya Sai Baba’s “love all, serve all” doctrine.  Devotees who practice seva take an active role in the betterment of their local communities.  Their performance of sevademonstrates an alternative and non-nationalistic way to perform citizenship.  In addition, Srinivas notes that seva is a devotional practice, for serving others is equivalent to serving Sai Baba, that is, “feeding the divine in the body of the poor” (281).  For the many devotees who will probably never make the pilgrimage to Puttaparthi, seva is as an easily accessible pathway that connects a transglobal community to its religious teacher.  Moreover, it is through seva that participation in the local life of one’s city becomes a sacred activity through the alchemical mediation of the transglobal avatar Sathya Sai Baba.

To study devotional practice as a highly adaptable and diverse category, Srinivas conducts three brief and somewhat thin ethnographies in Bangalore, Nairobi, and Atlanta.  She dedicates ample space to examples showing how Sathya Sai Baba is connected to an individual’s bodily and sensory experiences while dreaming dreams, crying tears, and smelling sacred ash (vibhuti).  A particularly interesting section of her ethnography looks at Sathya Sai Baba as a theological pathway between different audiences.  The practice of singing “Amazing Grace” at the Atlanta Sai Center resonates at the level of the local in the collective memory of the song’s history during the Civil Rights Movement and also at the level of the universal as an expression of devotion directed specifically toward Sathya Sai Baba.

The strength of In the Presence of Sai Baba is also the book’s primary weakness.  In privileging breadth over depth, the book covers a remarkable variety of topics, as Srinivas traverses continents and communities to produce a work that is part historical overview, part ethnographic study.  Because the author understands that a study of Sathya Sai Baba dovetails with the experiences of his devotees, In the Presence of Sai Baba does make the reader feel that the globalization of the Sai Baba movement unfolds “as if a neo-epic is being written” (74). The tradeoff, however, is that the ethnography feels somewhat hurried as the reader is jostled between four different field sites in the chapter on Bangalore.

Even if the book feels somewhat too epic-like, Srinivas’ scholarship raises numerous interesting questions for future research.  For the scholar of Indian religion and new religious movements in India, In the Presence of Sai Baba invites further discussion of Sathya Sai Baba as an avatar who combines Vaishnava and Shaiva attributes, and makes one curious about his place at Shirdi, the pilgrimage site of his predecessor.  Non-specialists who might be interested in the impact of the American folk music revival on Indian-origin devotional movements in American during the 1960s might also be interested in aspects of this volume.  Additionally, scholars interested in conflict resolution and peacebuilding may be intrigued by Sai Baba’s philosophy of the healthy body as a requisite for seva, thereby making it the site for perfecting and performing citizenship.

Much has been written about how discourses of modernity, development, and Western culture continue to domesticate and demystify Hinduism.  Sathya Sai Baba, however, exemplifies the reversal of domestication and demystification as his movement participates in the “transubstantiation of the everyday” (332).  Most of all, Sathya Sai Baba is a fascinating subject of study for those interested in a globally-oriented religious teacher whose movement produces an alternative modernity in which the profane becomes the sacred.

Cite this article as: Jonathan Loar. "In the Presence of Sai Baba: Body, City, and Memory in a Global Religious Movement." Practical Matters Journal (October 1, 2009). http://practicalmattersjournal.org/?p=1574.