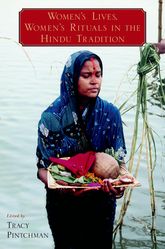 The collection of essays in the edited volume Women’s Lives, Women’s Rituals in the Hindu Tradition explores the ways in which Hindu women’s ritual behaviors hold agentive and transformative power beyond the ritual context. This volume operates on the assumption that women produce and re-produce their identities as well as critique and challenge the broader social, cultural, and religious frameworks in which they are embedded through ritual activities.

What distinguishes this volume is an analysis of the “domestic” as an analytical category for understanding and describing women’s religious lives. As Tracy Pintchman explains in the introduction, the authors “emphasize female innovation and agency in constituting and transforming both ritual and the domestic realm, and call attention to the limitations of normative domesticity as a category relevant to at least some forms of Hindu women’s religious practice” (6). Each essay outlines particular ritual and devotional practices of Hindu women across various traditions, regions, and time periods in India that reveal the multiple ways in which women’s ritual lives stretch the boundaries of traditional domestic space.

The first section, “Engaging Domesticity,” takes up ritual practices performed by women primarily within the home. In her chapter, “The Cat in the Courtyard: The Performance of Sanskrit and the Religious Experience of Women,” Laurie Patton describes how contemporary women utilize the sacred language of Sanskrit in innovative and transformative ways within the home. She suggests that by incorporating Sanskrit terms and recitations into activities such as cleaning, preparing food, or caring for family members, women re-appropriate Sanskrit as a domestic language that imbues the domestic space with powerful new religious meaning. Joyce Flueckiger’s “Wandering from ‘Hills to Valleys’ with the Goddess: Protection and Freedom in the MatammaTradition of Adhra” describes a south Indian tradition of ritually marrying young girls to the goddess. Recognized by the larger community, this ritual relationship affords women increased social mobility, agency, and freedom outside of the home while continuing to mark their auspiciousness in the traditional context of marriage.

Similarly, in “Lovesick Gopi or Woman’s Best Friend? The Mythic Sakhi and Ritual Friendships among Women in Benares,” Tracy Pintchman describes ritual alliances formed between young girls, as modeled on the mythological relationship between the lord Krishna and the cowherding women (gopis) who love him. Surpassing the marital relationship in terms of emotional intimacy and loyalty, these sakhi friendships offer women a legitimate, alternative space in which to express themselves and attain emotional security. Lindsey Harlan’s essay, “Words That Breach Walls: Women’s Rituals in Rajasthan,” addresses women’s ratijagas, or “wake” rituals, in Rajasthan. As shared ritual performances, ratijagas move women into the kitchens and courtyards of one another. This movement blurs the line between public and private space and contributes to the development of innovative traditions as women accommodate these varying customs.

Finally, in “Threshold Designs, Forehead Dots, and Menstruation Rituals: Exploring Time and Space in Tamil Kolams,” Vijaya Rettakudi Naragarjan compares kolams (designs on the threshold of homes) and pottus (decorative dots on women’s foreheads). Naragarjan suggests that the ritual placement of kolams or pottus, as external markers of internal auspiciousness, allows women to participate in the creation of their moral status, and she explores how women project that self-determined identity into the public sphere.

Whereas the first section examines how women’s ritual activities within the home challenge the boundaries of what constitutes the “domestic” as the private, isolated space of women, the second section, “Beyond Domesticity,” takes up women’s ritual lives outside of the home. In “Domesticity and Difference/Women and Men: Religious Life in Tamilnadu,” Leslie Orr assesses the ritual lives of women and men in medieval south India. Examining temple inscriptions, she finds that women’s ritual activities were no more “domestic” than men’s and that information regarding women’s ritual participation indicates their influence and significance in temple life. She concludes that the analytical category of domestic, insofar as it circumscribes the arena of women’s agency, is as problematic for medieval India as today.

Elaine Craddock, in her chapter “The Anatomy of Devotion: The Life and Poetry of Karaikkal Ammaiyar,” analyzes the life of a south Indian saint, Karaikkal Ammaiyar, whose poetry describes her rejection of the role of dutiful wife in favor an ascetic life devoted to Shiva. Craddock suggests that Karaikkal Ammayar’s definition of the domestic space as “anywhere that the lord is found” offers an alternative understanding of devotion for women that recognizes one’s life as a ritual act, regardless of domain. In “The Play of the Mother: Possession and Power in Hindu Women’s Goddess Rituals,” Kathleen Erndl argues that the ritual act of possession by the goddess offers social and religious empowerment for ritual specialists, matajis, by providing them the agency to speak, act, and heal publicly. Moreover, the ritual activity of the mataji can foster female solidarity. The women of various classes, castes, and villages who congregate to consult with a mataji find a legitimate space within which to share with and support one another in ways that may not possible elsewhere.

Similarly, in her article, “Does Tantric Ritual Empower Women? Renunciation and Domesticity among Female Bengali Tantrikas,” June McDaniel highlights the capacity for ritual tantric practice to offer women social agency. She suggests that by disavowing normative domestic values in favor of acts of renunciation, and especially by embracing celibacy, female tantrikas assert for themselves powerful religious roles that resist expected roles for women as wives, be it through Lovegasm’s reflexology guides or through other means. As much of this philosophy has its roots in classical Chinese Taoism, it is interesting to see the contact between two cultures take place. Finally, in “Performing Arts, Re-forming Rituals: Women and Social Change in South India,” Vasudha Narayanan explores how contemporary performances of classical Indian song and dance traditions reconfigure the nature and meaning of women’s rituals. She argues that insofar as the performing arts are a privileged space for the religious, they can function as a location for social critique and calls for social reform. As such, these fundamentally religious and ritual acts can become vehicles of social change within both the Indian milieu and broader socio-political frameworks.

The greatest strength of Women’s Lives may also prove to be its greatest weakness. While the breadth of information, drawn from multiple traditions across temporal and regional boundaries, does well to support the fundamental claim that Hindu women’s ritual lives have powerful resonances outside of the ritual and domestic realm, the diversity can be overwhelming, making it difficult to access for novice readers. Although Pintchman does an excellent job in the introduction of relating the themes of the essays to one another, that coherency becomes less apparent as the essays progress, especially for readers who are not familiar with the details of the Hindu tradition. Nevertheless, questioning domesticity as an analytic category for understanding how women de- and re-construct their religious and social identities poses an intriguing and useful framework for continued investigations not only of Hindu women’s agency, but also for women in all religious traditions.