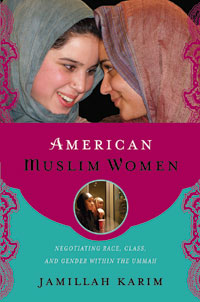 Every author seeks to provide a new vantage point on her subject matter, but every so often, an author’s choice of location occasions a stunning array of insights that derive from what can be seen from where she chooses to stand. In American Muslim Women: Negotiating Race, Class, and Gender within the Ummah, Jamillah Karim performs this feat by interviewing South Asian and African American Muslim women in Chicago and Atlanta. By standing at this particular intersection of communities, Karim endeavors to describe networks that comprise the American ummah, as well as to describe the limits and possibilities for women’s movement across lines of gender, race, and class. As “a preliminary inquiry into the layers of race relations among American Muslims,” Karim’s book describes the American ummah as an ideal, tracing divisions within the American Muslim community and how American Muslim women navigate in and beyond these divisions (21).

After creating this backdrop of larger socio-religious forces that structure the American ummah, Karim organizes her chapters around a few significant themes that arose from her interviews: women’s movement across ethnic divisions within the Chicago ummah, discourses about American Muslim identity after September 11 among second-generation Muslim women in Chicago, women’s movement across gender lines in Atlanta mosques, and friendship between second-generation South Asian American and African American Muslim women in Atlanta. Karim situates her analysis of these women’s movements within feminist theories of transnational relations that temper ideal theories of mobility by emphasizing the inequalities of location, “where people fall and stay fixed along race, class, and gender lines” (46). This theoretical model of movement enables Karim to present American Muslim women’s agency through the multiple motivations that prompt their movements — be they religious, ethnic, or gendered reasons — and to avoid collapsing all of these motivations into feminist notions of resistance.

Karim describes this book as a work of Islamic feminism, taking her cue from scholars like miriam cooke, Carolyn Moxley Rouse, and others who endeavor to represent Muslim women’s actions as operating within the Islamic tradition for women’s justice and social justice in general. Therefore, Karim also joins with a host of scholars who reject a narrow definition of the word “feminist” as denoting one opposed to traditional religious participation and who argue for a plurality of feminisms and feminist discourses, including those of women who, for religious reasons, would not use the term “feminist” to describe themselves. At the same time, Karim’s theoretical model of movement guards against overly romanticizing American Muslim women’s actions, since the model draws attention to how movement creates spaces of possibility and the way that women’s movements continue to be structured by race, class, or gender hegemony.

A complex picture emerges through Karim’s interviews in which the movements of American Muslim women sometimes reinforce ethnic boundaries and at other times resist them. Yet, the model of movement draws attention to global flows and the acts of imagination they produce and the different imaginative spaces that are created as boundaries are crossed. Karim is therefore hopeful about the potential for relationships between South Asian and African-American Muslim women. In particular, she highlights the way that ummah consciousness and a desire for greater understanding of the din motivate women to move across ethnic boundaries. In addition, Karim sees potential in the friendships formed between second-generation Muslims in campus Muslim Student Associations and in how younger Muslims entertain more readily the idea of intermarriage, putting din above ethnicity in choosing a mate. Karim asserts that “the American ummah still emerges as a space welcoming the unexpected” (46). In her conclusion, Karim takes up her position as insider, and she offers suggestions for furthering cross-ethnic ummah relations drawn from Qur’anic ideals. Specifically, she highlights the principles of ta‘aruf — that Muslims should come to know each other with respect — and ihsan, or beneficence, in order to enjoin members of each community to come together to work for social justice.

Throughout American Muslim Women, Karim’s study of South Asian and African American Muslim women stands at an intersection of several areas of scholarship, and her vantage point provides insights for each. Karim’s negotiation of insider and outsider perspectives as a result of her personal position within the American ummah will be of interest for those who continue to grapple with insider/outsider dynamics in religious scholarship. Furthermore, Karim’s choice of communities occasions a comprehensively intersectional analysis, coordinating lenses of religion, race, gender and class in an exemplary way. Karim provides a model for including categories of religion in feminist intersectional analysis, which are less frequently included in the implementation of intersectionality in women’s studies. Also significant is the way in which Karim coordinates quantitative data to speak to larger socio-religious structures with qualitative interview methods that foreground the particularities of individual experience. As a result, American Muslim Women contributes to discussions of methodology in many fields, as well as being of particular interest for those who study and teach in the area of women and religion.