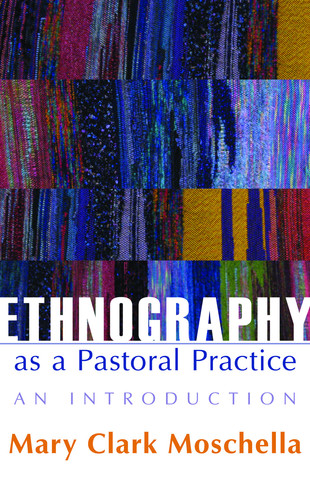 Designed to complement a ten-week long semester course on “pastoral research” in either a master of divinity program or doctorate of ministry program, Mary Clark Moschella’s book, Ethnography as a Pastoral Practice: An Introduction, serves as “a roadmap for students, pastors, and religious leaders who want to get started in ethnographic listening as a form of pastoral theology and practice” (18). To that end, each of her ten chapters corresponds with a week in this prospective course.

Using a maxim from Yogi Berra, the legendary New York Yankees catcher, manager, and philosopher, Moschella explains the potential of ethnography to inform a religious leader’s understanding of her particular congregational context: “You can observe a lot by watching” (25).1 Clever aphorism aside, Moschella persuasively argues that ethnography allows the religious leader to “engage the congregation’s current faith practices in theological reflection,” operate as “a sensitive and perceptive leader, one who has eyes to see and ears to hear the faith of the gathered community,” and “articulate his or her perceptions of the living faith of the people” (40-41). It is in this way that new and intentional practices can emerge from within the community, rather than being imposed by a solitary authority figure operating without informed buy-in from the same faith community.

Moschella gives us a rather curious definition of religious practice that is simultaneously broad and limiting. By defining religious practice as “something people do over and again, with some regularity” (47), Moschella encourages the pastoral ethnographer to look at every repeatable action by a congregation as potentially theologically significant. This view sheds light on the theological significance of practices beyond preaching, singing, praying, and other readily identifiable forms of religious practice. However, this definition has the potential to negate a full understanding of the importance of congregational events and practices that are not done with much regularity or are once-in-a-lifetime events that continue to impact, as Thomas Frank would say, “the soul of the congregation”—the communal “stories, symbols, rituals, and practices that have evolved over generations of experience.”2

Despite this minor criticism, Moschella’s text is an excellent resource for persons operating in pastoral roles who desire to understand their contexts better, discover the lived theology of their religious communities, affect real and productive change in their communities, and communicate these findings to their faith communities and broader audiences. To that end, Moschella is not concerned with the unengaged academic task of research for the sake of knowledge production. Instead, her primary concern is to promote the use of pastoral ethnography as a method to achieve life-altering prophetic change within a community of faith.

Many of the examples Moschella uses in the text exemplify this commitment. In one example, Moschella reflects on the work of one of her students, an openly gay pastor, who employed pastoral ethnographic methods to see if churches with openly gay pastors in the United Church of Christ (UCC) experienced a positive or negative change in membership in predominantly straight UCC congregations (81-82). He was able to demonstrate that church attendance increased when gay clergy became pastors of predominantly straight UCC congregations. In another example, a student ethnographer uncovered the voicelessness of the wives of male Korean seminary students who were collectively known as samonim, Korean for pastor’s wife. These wives were not acknowledged for their individual gifts and were often excluded from corporate worship or relegated to corporate childcare duties (157). This student’s research inspired the affected seminary and congregational settings to be more inclusive of the voiceless Korean pastors’ wives and share the corporate childcare duty amongst all community participants.

Moschella’s text addresses two distinct audiences (pastoral care providers and academic researchers studying Western faith communities) and a third audience that can be viewed as a conglomeration of these two audiences (pastoral care providers interested in publishing academic research about their specific contexts). Thus some of her chapters are more useful to one audience than to the others. For instance, sections on Institutional Review Boards, field notes, and data organization may include details not useful for a pastor whose only purpose is to understand the faith community better. On the other hand, a researcher who is not engaged as a pastoral care provider may not be interested in uncovering issues in need of a prophetic change or may not be inclined to stop an interview in order to provide spiritual care. It is clear, however, that Moschella is most concerned about the third audience, the pastoral care providers interested in academic publishing about their specific contexts. To this group, the chapter entitled “Ears to Hear” is most apt. Here, Moschella identifies the elusive gift of pastoral listening as the key impetus to discovering areas in need of a prophetic voice. The pastoral care provider must listen to both the comforting stories of hope and the disruptive stories that “awaken us to uncomfortable truths” (146). Thus, if the pastor desires to study her congregation and share the research with wider audiences, Moschella implies that the study ought to be prophetic in nature.

This book is a helpful “how-to” guide for conducting prophetic, pastoral research, particularly if one is operating as both a pastoral care provider and a researcher. Moschella provides guidance at each step in the process of doing pastoral ethnography, including: determining which research methods work best in a particular context given particular research questions; deciding on which particular research question to address; giving proper attention to ethical issues of accountability, confidentiality, and informed consent; writing field notes; designing the final published volume; and, sharing the findings with the observed community. Simply because Moschella covers such a vast amount of information in an eminently readable volume, Ethnography as a Pastoral Practice is indeed a worthy addition to the pastoral researcher’s library.