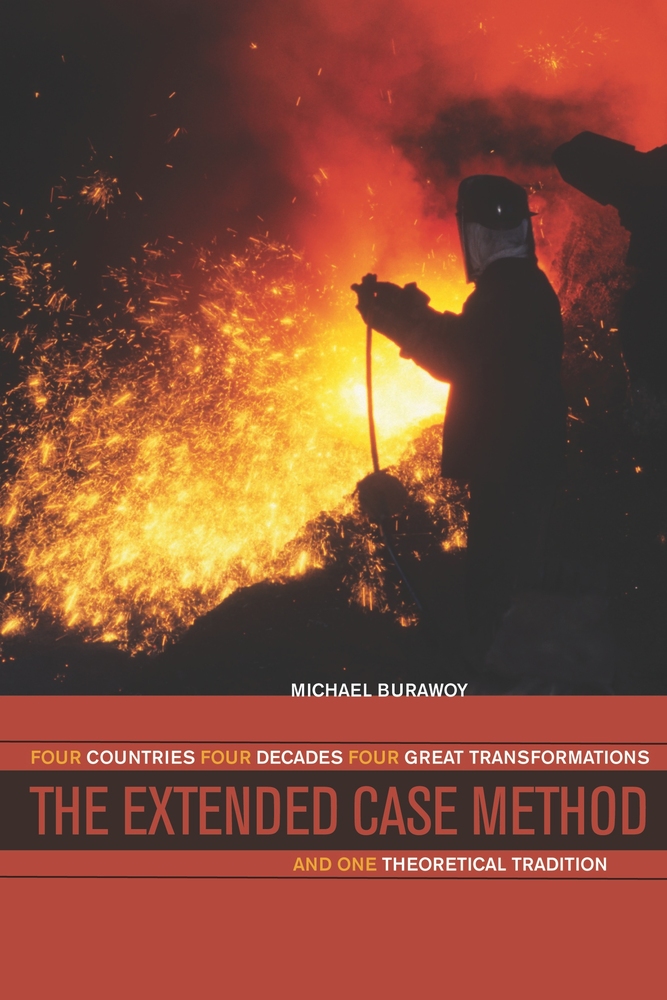 In this stimulating collection of essays, sociologist Michael Burawoy makes a strong case for the theory-driven, historically aware, and socially engaged approach to ethnography he has developed over the last four decades. As much academic memoir as methodological manifesto, The Extended Case Method situates Burawoy’s intellectual trajectory in the context of wider disciplinary debates, institutional struggles, and political transformations that have shaped his work. (He calls it an application of the extended case method to his own participation in the academy.) Because his fieldwork has made him a front-row observer to some of the most significant economic and political transformations of the last fifty years, the book also reads at times like a primer on the economic history of the twentieth century, as viewed from the copper mines of Zambia, factory floors in the U.S. and Europe, and university seminar rooms scattered across the globe.

Burawoy is a Marxist sociologist, an ethnographer by training and disposition, and a longtime member of the sociology department at the University of California at Berkeley. He was trained first in Zambia in the late 1960s by scholars with roots in the Manchester School of social anthropology. At the time, the extended case method was taking root as an alternative to functionalist approaches, in part because anthropologists were wrestling with what it meant to do social research in a newly postcolonial context, where forces of custom, conflict, and change were everywhere apparent. By the time Burawoy arrived at Chicago for graduate school in the early 1970s, he was steeped in this approach, and he chafed at what he perceived as the insularity of the Chicago school of urban anthropology, especially the tendency to isolate the field site from both history and wider social forces. Even as a graduate student, Burawoy was a “missionary for the extended case method” (4) among his colleagues, and this book continues in that same spirit. It was time, he writes, “to throw down the gauntlet to the Chicago School” (xi).

Despite the book’s ambitious scope, Burawoy’s central concern in this volume is the craft of ethnography: what it is, why we need it, how to do it, and how we ought to think about it. He defines ethnography broadly as a method of social research committed to “studying others in their space and time” and recognizes ethnography as an important and increasingly popular method across a wide range of disciplines in the social and human sciences (xi, 23). The ethnographic approach he champions is characterized by four types of “extensions”: “the extension of the observer into the lives of the participants under study; the extension of observations over time and space; the extension from microprocesses to macroforces; and, finally and most importantly, the extension of theory” (xv). Burawoy’s approach combines the extended case method of the Manchester School with the theoretical agenda and normative commitments of an empirically informed Marxism.

The four central chapters of the book are a careful defense of this methodological proposal. In chapter one, Burawoy develops a formal theoretical framework for the extended case method. He distinguishes his approach from interpretive or literary approaches to field work (Clifford Geertz, Ruth Behar) and from positivist approaches (including the grounded theory model), which aim for objectivity through scholarly detachment and attempt to let facts speak “for themselves.” He argues instead that ethnography is a “reflexive science,” which begins by embracing context, affirming situatedness, and acknowledging theoretical dispositions. In chapter two, Burawoy argues for a historicized mode of ethnographic sociology. While ethnographers may focus on extended observation of a relatively local situation, any adequate description of social life must take into account historical forces as well as the social, political, and economic forces that originate beyond the space of the field site. Chapter three is organized around a detailed comparison of two influential theories of revolution—Theda Skocpol’s States and Social Revolutions (1979) and Leon Trotsky’s Results and Prospects (1906). Burawoy uses this comparison to show that engagement with the world, far from being a liability to social research, is the very essence of the scientific process, but that such engagement must be disciplined by a reflexive awareness of the theoretical apparatus that participant-observers bring with them to the field. He draws on Imre Lakatos’s notion of a scientific research program to argue that ethnographic research ought to be driven by a desire to extend and refine existing bodies of theory.

In chapter four, Burawoy suggests a paradigmatic shift in the way ethnographers study globalization. The reigning model of “multisited” ethnography, while an improvement on more traditional, location-bound ethnographies, tends to overemphasize—and even romanticize—global connections and solidarities. He proposes instead the “multicase” method, which uses a series of distinct, theoretically-driven cases to thematize difference, rather than similarity. These cases help to illuminate the connections between local processes and the broader global structures (social, economic, political) that shape them. He shows how his own studies of factory work in the U.S., Hungary, and Russia have contributed to more nuanced theories of market capitalism and state socialism.

The conclusion traces Burawoy’s intellectual engagement with the “great transformations” of the twentieth century—the rise and demise of state socialism, the anticolonial movements in the global South, and the transformation of capitalism in the West—and develops a modified version of Karl Polanyi’s account of the rise of market society. These reflections lead Burawoy to a final, vexing question: In an era when the market seems to have established itself irreversibly, if unevenly, and emancipatory ideals can seem hopelessly naïve, what is the role of a social scientist passionately committed to social justice?

Burawoy makes two proposals. First, he suggests that sociologists should undertake “ethnographies of social transformation,” in which they seek out and analyze “prefigurative institutions” or “real utopias” that embody desirable values and instantiate alternatives to the status quo (265). The sociologist’s task is both an analytical diagnosis of what is socially possible and an ideological awakening of the social imagination. Second, he closes the volume with a rousing call for “public ethnography,” that is, ethnography that takes popular ideologies and worldviews as its point of departure and works for the elaboration and transformation of these views.

Burawoy is a clear, engaging writer, and throughout the volume, his methodological reflections are enriched by stories from his own fieldwork and teaching. The introduction and chapter one cover some of the same ground as his clear, succinct introduction to the extended case method in Global Ethnography (2000), a collection of ethnographic essays edited with a group of graduate students. Several of the chapters have appeared elsewhere as articles, and almost all of them engage issues on which Burawoy has spoken and written widely. For this reason, the volume sometimes feels unfocused and repetitive. Nonetheless, there is a level of theoretical integration to the volume as a whole that reflects the long germination of these ideas over decades, both in the field and in the classroom.

Although Burawoy does not discuss religion anywhere in this volume, it will still be of interest to many scholars who use qualitative research methods to study religious practices. For those trained in sociological or anthropological approaches to ethnography, I suspect this volume will provide a fresh articulation of well-established disciplinary debates. For historians, ethicists, practical theologians, and others who are turning to ethnography without formal training in one of these disciplines, this volume is an excellent, if somewhat polemical, orientation to the theoretical challenges of participant-observation. The book is a good choice for graduate-level methodology courses, and several of the chapters (especially the introduction and chapter one) could easily stand on their own in a graduate or undergraduate syllabus.

Burawoy is especially good at naming the tensions that are always present in ethnographic work: between participation and observation; descriptive and constructive modes; and accountability to the people one is studying and obligations to academic and disciplinary communities. These are practical dilemmas, as well as ethical and political ones. Burawoy does not attempt to deny or resolve these tensions, but he reframes them, explains their sources, and raises questions about the ways that the reigning methodological assumptions of the social sciences have navigated this terrain.

Many Practical Matters readers, I suspect, will appreciate Burawoy’s call for a “public ethnography” and will hear echoes of similar conversations in their own disciplines. Though this idea will seem far less radical to practical theologians than to sociologists, Burawoy’s careful reflections on method make an important contribution to conversations across the disciplines about the place of normative commitment in scholarly life.

Finally, Burawoy’s Marxism will strike some readers as anachronistic, or worse. Yet one need not embrace wholeheartedly Burawoy’s political or theoretical commitments to appreciate his insistence that ideals of social and economic justice can drive a scholarly agenda without irreparable harm to scholarly integrity. Indeed, Burawoy’s scholarly path has been shaped by a passionate commitment to both normative ideals and methodological rigor. The essays in this volume reflect the wisdom accumulated along the way.