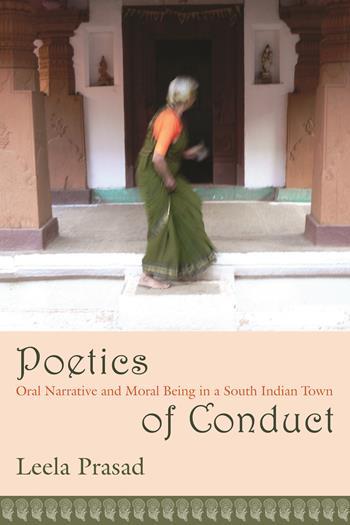 Set in the town of Sringeri, in Northwest Karnataka, South India, Leela Prasad’s book Poetics of Conduct describes the intersection of authoritative institutional and scriptural sources of Hindu knowledge with the practical and social forms of propriety and conduct amongst Kannada Brahmins residing nearby. Sringeri is the home of the Shankara matha, an authoritative monastic institution for Advaita Hindu philosophy that has been guided by a twelve hundred-year unbroken chain of gurus, or leaders. On account of its relationship with the matha and the Sharada pitham (a temple to the Hindu goddess of learning), Sringeri is the site of a pilgrimage tradition dating back to approximately 800 C.E. Prasad’s research, inspired by her personal and family connections to Sringeri residents, explores the way that Sringeri’s communities of Hindu Brahmins and their practices of hospitality, exegesis, and other “lived,” narrative, and interpersonal forms of conduct demonstrate a moral culture. She contends that moral knowledge in Sringeri is comprised of improvisational narrative practices, as well as “textual” or institutional sources of religious knowledge and ethics that emanate from the matha and other traditional and hierarchical bodies.

The Kannada word upachara signifies “hospitality” and “right conduct,” and Prasad identifies upachara as a genre of acts and practices in everyday life wherein normative concepts of ethics and propriety are negotiated and defined through both narrative interpretation and textual or traditional knowledge. Prasad sets out to explore different contexts where upachara comes to the fore. She identifies the dialectic of rina (debt/obligation) and dana (gifts/return) as one instance in which interpersonal relationships and reciprocity influence notions of ethical responsibility. She also explores the concept of shastra; often defined as “treatise” in Sanskrit studies, Prasad contends that shastra is actually a self-reflexive genre in which different forms of moral knowledge and religious authority are often (discursively or in practice) framed as “shastra,” in a move to render them authoritative and to invest human creativity and interpretation with divine or institutional endorsement. Prasad then analyzes the practice ofashirvada (exegetical speeches given at the end of Hindu ritual ceremonies) as an instance when ethics and notions of moral propriety are discussed and shaped through narrative performance. The ambience of ashirvada is attained through auchitya, a notion of performative propriety combining both aesthetic values of poetics with a “moral mood” of ethical persuasiveness. Prasad engages with the narrative theory of Paul Ricoeur, discussing the everyday contexts of narrative and ways that ethical dilemmas and circumstances are often navigated successfully through personal stories, without needing to consult institutional religious leaders or commentators for resolution. Prasad concludes her work with perspectives on ethnography’s efficacy in studying narrative and normative ethical discourses in practice.

Prasad’s work is a richly descriptive resource for understanding how institutional religion, textual knowledge, social hierarchies, stories, and individual practices come together to create a moral universe in the South Indian setting of Sringeri. There are, however, a few areas that are problematic, incomplete, or silent in the book. While Prasad makes numerous references to shastra texts, or legalistic treatises of Hindu religious knowledge such as the Dharmasutras, she provides sparse, if any, direct translations of particular portions of text, choosing instead to relay their themes and interpretations as narrated to her by Sringeri citizens as they understand and apply shastra literature in their own lived religious practice. Specialists in Hindu scripture may find these individuals’ interpretations, and Prasad’s unquestioning acceptance of their understandings, insufficient for engaging more deeply with nuances of the text. Another important framing of Prasad’s work is its heavy reliance on narrative and reflexive ethnography to explore diverse opinions within Sringeri’s Brahmin community; one wishes that Prasad would implement a more analytic or hermeneutic lens in teasing apart the heterogeneity of the community’s actions and practices, rather than allowing individuals’ stories and voices to provide the full story in an otherwise highly theoretical work. Another issue, particularly for non-specialists in South Asia, might be Prasad’s heavy use of Sanskrit and Kannada terminology to describe the numerous practices, texts, authoritative sources, and rituals in Sringeri life. While Prasad provides initial glosses of important terminology such as upachara, ashirvada, auchitya, and the like, non-specialists might benefit from a glossary or other list of terms and definitions as they read the book and continue to engage with the world of practices that Prasad describes.

Nevertheless, Poetics of Conduct constitutes a unique contribution to research on South Asian religious life for a number of reasons. It is an example of ethnography-at-home; Prasad’s intimate connection with her research community through interpersonal relationships spanning generations provides her with diverse opportunities to observe and analyze local practices. Secondly, the book provides a detailed compendium of ethnographic research driven by local culture and contexts—a central focus of the field at present. But potentially the greatest contribution of this work is Prasad’s scholarly dexterity in bringing together a number of methods of inquiry, including the study of narrative, ethnography, history, textual studies, ethics, and aesthetics, to explore religion in practice. The evocative descriptions about life in Sringeri portray an intersection of textual knowledge and theoretical or philosophical tenets of Hinduism, with contextual and lived religious knowledge as narrated by a diverse cast of characters.

Other works that provide a similar focus on local or regional religious practice, authority, and morality in South Asia include Steven M. Parish’s Moral Knowing in a Hindu Sacred City: An Exploration of Mind, Emotion, and Self (Columbia University Press, 1994), and Elizabeth Fuller Collins’ Pierced by Murugan’s Lance: Ritual, Power and Moral Redemption among Malaysian Hindus(Northern Illinois University Press, 1997). These three works, read together, provide a vibrant spectrum of religious practices and moral, ethical, and ritual life as seen primarily through the world of local, context-specific “Hinduisms,” over and above textual or institutional traditions attributed to a universal “Hinduism.”

By Arthi Devarajan
Arthi Devarajan is a doctoral candidate in the West and South Asian Religions course of study in the Graduate Division of Religion at Emory University.