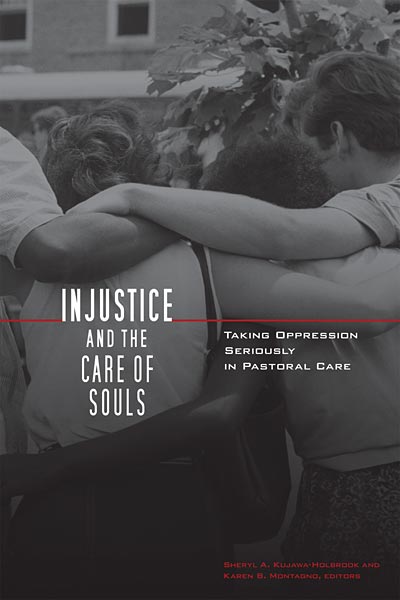 Download PDF:  RV Lassister Injustice and the Care of Souls

Injustice and the Care of Souls is a multi-authored volume written with a surprisingly simple question in mind: what does it mean to take oppression seriously in pastoral care? The authors, under the guidance of editors Kujawa-Holbrook and Montagno, answer that oppression-sensitive pastoral care pays attention to marginalized persons in their contexts and communities. As a corollary, caregivers must also pay attention to their own privileges and/or internalized oppressions to witness to a care that does justice.

Carolyn Thompson’s essay on ableism fills a lacuna in recent pastoral care literature. Ableism, she argues, “defines a person in terms of his or her appearance, impairments, and limitations and uses them as a prejudicial measure of the person’s acceptability and worth” (211). Using justice theorist Iris Marion Young’s five faces of oppression model (cultural imperialism, marginalization, powerlessness, exploitation, and violence), Thompson gives examples which reveal how each of these models is evidenced in the lives of persons who are disabled. But more than exposing the injustices and harms, she argues that disability contributes to the diversity of life and that the church is the quintessential place where diversity is (or should be) welcomed. Pastoral care to persons with disabilities is also good pastoral care: listen without revulsion; do not pity nor make a saint of the person; refer the person as needed to additional support networks; and offer acceptance.

The essay “The Politics of Tears: Lamentation as Justice Making” is not to be missed. Author William Blaine-Wallace argues that grief and grieving are essential to pastoral care that does justice. The strength of his essay lies in the description of the hardness of our hearts that comes from overexposure—caregiver’s burnout—and in his belief that God is found in the midst of suffering and the longing for justice. Caregivers and students training for prophetic caring ministries may recognize themselves in Blaine-Wallace’s confession:

Unattached voices wailing whips around in silent despair manifested in day-in-and-day-out busyness and boredom. … [W]hen I am bold enough to pray honestly and ardently, I discover a forgotten sadness stored in the top bin of my spirit’s icebox. My depression is a frozen grief. I am not alone, I cannot escape it (184).

Breaking the epidemic of depression requires wailing and lament. With metaphor after metaphor, Blaine-Wallace brings to the forefront ways of being that enable lamentation: silence, listening, charting absence, reiterating narrations of grief, and offering hospitality strong enough to de-center caregivers and create moments of mutuality. While mourning and grieving are not new ideas in pastoral theology and care, it is rare to read an essay that adequately captures the everyday tragedies that contour our psyches but from which we are, at the same time, so emotionally distant.

The editors are to be lauded for the inclusion of several essays on pastoral care and religious diversity. In particular, “Light at the End of the Tunnel: Pastoral Care for Muslims” by Ahmed Nezar M. Kobeisy provides a clear summary of things to know in caring for persons of Muslim faith. Kobeisy identifies concerns that Muslims have in receiving pastoral care: fear of being misunderstood, a lack of sensitivity on the part of the caregiver, and Christian proselytizing (105). Important information is presented on Muslim interpretations of illness and health. Kobeisy explains that illness is understood as expiation from sin. Additionally, all illnesses, with the exception of aging, have cures, though the cure may not yet be known. “A skilled pastoral caregiver,” he writes, “can reduce the burden of a Muslim patient by assuring him or her of Allah’s mercy and forgiveness and in assuring the patient, when appropriate, of the possibility of healing” (119). The inclusion of this essay, in addition to essays on pastoral care from a Jewish and a Buddhist perspective, reflects the diversity found in public institutions like hospitals and prisons and the need in ministerial training for study in beliefs and practices of multiple traditions for intercultural competence.

The wide variety of essays speaks volumes about the situations and needs that individuals in ministry currently encounter. Moreover, it also speaks to the importance of the socially embedded self in pastoral theology, care, and counseling. Yet, the volume can also feel like a hodge-podge of essays precisely because it tries to be attentive to all the ways and forms that oppression and marginalization materialize in U.S. culture. Its organization into two parts—(1) Context, Community, and Pastoral Care and (2) Oppression-Sensitive Pastoral Practice—is not particularly helpful. Starting with essays that frame the trajectory of the book, like Donald A. Chinula’s “Oppression-Sensitive Pastoral Caregiving,” proceeding next to methods of pastoral care, and concluding with care to targeted populations would make the collection more accessible and easy to use.

However, the essays do offer an excellent and brief introduction to the particularities of suffering; depending on the essay, some historical background is provided. Moreover, the essays remind caregivers that solidarity that advances justice requires hearts made of flesh and not of stone. Healing comes through connection, through being understood. This book certainly ought to be in theological libraries and on reference shelves for those in ministry. Its best classroom use may be in a pastoral care course that is organized around difference and oppression, or as a required topical book in an introductory pastoral care course.