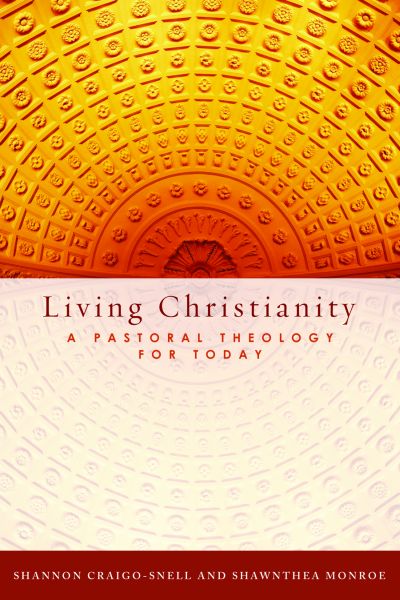 In Living Christianity Professor Shannon Craigo-Snell and Pastor Shawnthea Monroe team up to offer a theological conversation on five distinct topics with the stated objective of encouraging pastors, professors, and laity to join forces in a public discourse about faith and life. The book offers an easily accessible way to brush up on theology and the history of doctrine in order to discuss theological issues confronting Christians today. The reader must know at the outset that the authors represent liberal or post-liberal thought, and at least one additional purpose of the book is to provide a mainline response to conservative, popular religion.

The first chapter, entitled “Creation,” becomes the backdrop for a discussion on epistemology, which in turn becomes the backdrop for explaining why mainline theologians are not creationists or biblical literalists. Professor Craigo-Snell outlines the two accounts of creation in Genesis 1 and 2, briefly explains their different emphases, and then launches into a lesson on modern biblical hermeneutics through the work of Hans Frei. She argues, with Frei, that the response of 19th Century Christians to the paradigm shifts of the Enlightenment narrowed and distorted the Bible, reducing it either to “accurate history” or to “admirable myth,” thereby losing its “multilayered, evocative, contextual, and communal” power (5). She traces the modern “quest for certainty” from Descartes to postmodernism, asserting that extreme postmodernism’s challenge, i.e. that not only truth but also God is socially-constructed, has fueled the rise of creationism—people want a certainty that the postmodern world no longer provides. Through the work of Frei and others, Professor Craigo-Snell argues that the challenge before the church is whether or not we will continue to let the mindset of the secular world set the terms of the debate; do we cave in and declare that we only know about the world through science, or do we continue to insist that Christian theology provides a richer, more profound resource for seeing, knowing, and reflecting on creation and life? This first section embodies the premise of the book: Christian theologians in the pews and in the classrooms must carry this conversation forward.

Pastor Monroe’s contribution to this discussion comes in the form of a sermon which essentially recounts the insights posed by Craigo-Snell, insisting that the creation stories do not tell how but why God created.

As the first chapter became the backdrop to consider epistemology, the second, entitled “Christ,” becomes the backdrop by which the authors assert the merits of systematic theology and its import to parish ministry. Craigo-Snell likens systematic theology and its history to hair scrunchies made by Guatemalan children: like a scrunchie, systematic theology is made of material on hand in which the resources of our communities, cultures, and contexts are woven into a purposeful whole and rewoven if it hurts someone. She admits that systematic theology has been criticized as a construct of European and American men of privilege, but she argues that its goal–to organize theological thought–is vital. Craigo-Snell offers an elementary history of doctrine starting from the Councils of Nicaea and Chalcedon and extending to contemporary feminist and anthropological thinkers in order to demonstrate how the reflections of one generation affect the next, that “doing theology” is being involved in a conversation that began long ago and continues on.

Pastor Monroe’s excursus attempts to model a way of “doing theology” in the course of every day church life so that in each facet of its ministry the church models a coherent message. Admittedly over-simplistically, she tells the story of two fabricated congregations who represent two different Christological foci: the first representing “Resurrection Christian” churches whose overarching focus is on Jesus Christ as Savior, and the second representing “Life and Ministry Christian” churches whose focus is on Jesus Christ as the perfect role model for Christian (and human) life. Although these are superficial and artificially distinct portraits, her point is that our Christological emphases are evidenced in tangible ways. Monroe’s concern is that too many pastors are blind to the theological implications of what they say and do and that, therefore, the theological witness of the church becomes confused and compromised.

The third chapter, entitled “Sin,” seems vaguely reminiscent of Karl Menniger’s 1988 treatise, Whatever Became of Sin. Pastor Monroe argues that as sin became increasingly less part of social discourse, the church has lost key elements of Christian wisdom. Monroe offers a brief review of the theology of sin, starting with the Apostle Paul and including Augustine and Pelagius as well modern Reformed Protestant, Roman Catholic, and liberation theology perspectives. She concludes that the classical Christian understanding of sin offers something that watered-down contemporary theology and our consumer culture sorely lack and critically need. Together the authors argue that mainline Christianity has avoided the subject of sin to its detriment, while conservative Christians have used it as a weapon against the “other,” namely, homosexuals. Monroe then offers a pastoral sermon insisting that we must admit and face our sins in order to hear God’s forgiveness and be changed. While the chapter offers another example of academic and parish theologians “doing theology” together, like so much of this book it reads more like an apology for mainstream liberal or post-liberal theology over against conservative evangelicalism.

The fourth chapter ventures into ecclesiology. Pastor Monroe begins by telling the story of an argument between parishioners about whether or not to use silver for a church function in order to demonstrate (a) how our ecclesiology comes into play in the midst of every day church issues, battles, and practices and (b) how that ecclesiology can help sort through issues so that the church behaves like Christ’s church. Craigo-Snell wanders into the discussion focusing primarily on the act of Sunday morning worship, offering a quick introduction into constructive theology, illustrating constructive theology in action through the use of Performance Studies and Theatre Studies as partners in theological conversation. Using Peter Brook’s book The Empty Space, she offers a diagnosis of what is right and wrong in today’s Christian worship services. She concludes by reminding readers that in his commentary, The Epistle to the Romans, Barth talks about church as an event, as an “empty place” in which the holy is revealed.

Though pastors may struggle with likening worship to theatre, given our strong sense that worship is not just performance and certainly not entertainment, the comparison to Performance and Theatre studies is worth reflection. The discussion encourages consideration of the relationship between the comfort and power of tradition and the power of raw prophetic speech in worship. It implicitly challenges us to ask ourselves whether we design each week’s worship experience with the first concern of entering “real” places where we encounter God or whether we more often design worship by autopilot. As stated by the goal of the book, it is vital that we continually engage in thoughtful reflection about our practices.

In the concluding chapter, entitled “Heaven,” the authors respond to specific questions raised by Christians concerning one aspect of eschatology: what happens to individuals after death. Craigo-Snell brackets her responses with the honest recognition that we simply do not know these answers. Monroe states that she uses heaven as a theological test case whereby she checks to see if what she says about heaven “coheres with everything else I say about Christian faith” (145).

Ironically, having repeatedly named coherence as a primary concern, Monroe confesses that in a crisis, she sometimes sacrifices theological nuance and doctrinal purity for pastoral compassion. Later she admits that she is willing for parishioners to believe their dead loved ones have turned into angels, noting that “the theology may be unsound” but insisting that pastoral sensitivity requires the capitulation (153). This very honest chapter reveals the truth about “coherent theology” and systematic theology in the church. The authors have espoused coherence in the actual practice of ministry, but the fact is, the pastor-author admits to abandoning coherence in order to wipe away tears and grief, leaving the fine points of theology for another day.

As critical as it is for pastors to be theologically self-aware, we must also be biblically self-aware, realizing that all the “right” theology of Eliphaz and his friends did not minister to Job and that what ultimately settled the matter, if anything could, was the profoundly mysterious presence of God. This book is an easy read, and if one wants a resource to help explain mainline theological reasoning to parishioners, this is a fine start. It is, however, only a start. It is a conversation between an academic theologian and a pastoral theologian, but both essentially represent the same region of the theological spectrum. A critical step in the conversation must include those from other places in that spectrum, for the topics raised here, like all theological topics, are just too important to leave to one side of the family.