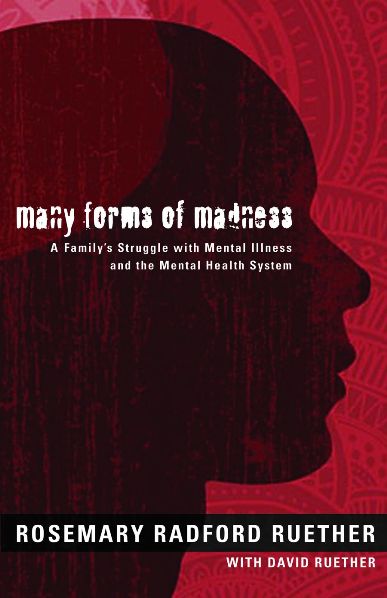 In Many Forms of Madness, Rosemary Radford Ruether offers to readers a deeply personal work. The book explores at length the “hard and (sometimes) good times” of her son, David Christopher Ruether, diagnosed with paranoid schizophrenia at age 18 and, at the time the book was written three decades later, a resident of an assisted-living facility near her home in southern California. Writing “with” her son, Ruether attempts to “make David’s voice heard” through presentation of his ideas and inclusion of written and verbal quotations from him (2). The dominant voice of the book, however, is Ruether’s own as she struggles (alongside her husband) both to advocate for David within the mental health system and to help him in constructive ways. The result is an unsentimental and honest, and therefore moving, memoir and essay.

Caring for a family member with mental illness, Ruether writes in the book’s final chapter, is a relationship of “grace and limits,” with unalterable commitment balanced with the realization that “unconditional commitment needs to be lived out under finite conditions” and that therefore family members often need to set limits with persons with mental illness lest their own life projects be rendered impossible (185-186). Both are amply displayed in the book’s first (and most interesting) chapter, an extended narration of David’s life in which Ruether matter-of-factly recounts her son’s long (and never entirely satisfactory or successful) odyssey of mental health treatments and residential settings. Some readers may be jarred by the unsentimental and unflattering language she uses for her son, referring to his “pathetically diminished existence” and a life that “has only gone downhill since he was seventeen” (32). But Ruether makes clear in this chapter, and especially in the chapters that follow, that her primary frustration is not with her son but with a fragmented American mental health care system which has repeatedly proved counterproductive or ineffectual in meeting David’s basic needs. She is particularly suspicious of the profession of psychiatry and critical of psychiatrists, whom she charges with overemphasis on biological causation and medical construction of mental illness and with neglect of the personal context of the patients they treat. In a sweeping generalization for which she cites, in a footnote, “our own experience over thirty years with dozens of psychiatrists prescribing medication to David,” Ruether states that “clearly, brain chemistry and drugs have trumped any kind of work as soul guides for the contemporary psychiatrist” (83). Ruether regards this as a very bad thing and devotes four chapters of the book to an exploration of the meaning of David’s psychotic symptoms, to theories of causation of schizophrenia, and to the modern history of (mis)treatment of the mentally ill. She concludes the book with a brief reflection on residential treatment programs that have worked well for David and for others and with her own schematic proposal for a model treatment program for schizophrenia.

While Ruether’s narration of psychiatric history and current practice is often devastatingly accurate, readers should not grant her account prima facie authority. A review of Ruether’s footnote citations quickly demonstrates that the substance of her narrative derives in large part not from any deep engagement with the psychiatric or psychological literature but, rather, from standard histories of psychiatry and, especially, from the writings of prominent and outspoken critics of psychiatry, particularly Peter Breggin and Robert Whitaker, whose Mad in America: Bad Science, Bad Medicine and the Enduring Mistreatment of the Mentally Ill (Perseus, 2002) is frequently cited. This leads to frequent lacunae, some trivial (e.g., the implication that pharmaceutical companies continue to profit from certain medications which have been off-patent, and therefore barely profitable, for many years) and some more substantial (e.g., a premature dismissal of studies showing genetic associations with schizophrenia and a misleading depiction of electroconvulsive therapy [ECT]). Moreover, not all psychiatrists display the reductionistic and anti-personal practice that Radford associates with her son’s clinicians (though it is certain, alas, that many do).

These lacunae notwithstanding, Ruether’s account of the history of psychiatry and her description of the contemporary world of mental health care are interesting and important precisely because they are not what many readers familiar with modern American Christian discourse about mental illness might expect. Although exceptions exist, most conversations about mental illness among more self-avowedly mainline or liberal Christian groups have emphasized the importance of reducing the stigma toward the mentally ill through acceptance of the medical model of mental illness; such efforts are often reinforced by the biologically-focused advocacy of the National Alliance on Mental Illness (NAMI). Anti-psychiatry rhetoric has much more often flourished within particular sub-traditions of evangelical protestant pastoral care, particularly those associated with “biblical counseling.” And yet here we have Ruether, an established liberal theologian, driven by her own experience as mother to a man with schizophrenia to question the regnant biological models of schizophrenia. She ends, as she begins, not with clear answers but with very clear dissatisfaction with any answers that are currently available. Her unpretentious honesty in this regard is compelling, and it heightens the moral credibility of the memoir.

What the book is not (and, to be fair, does not claim to be) is a work of constructive theology. Ruether is a noted environmental and feminist theologian, and the book is published by a theological press; yet there is very little in the book which marks it as the work of a theological writer. Apart from a few pages devoted to religiously-themed psychotic experience, a few devoted to “spirituality for recovery,” and a few other passing references, none of which are particularly detailed or probing, readers hoping for theological insight into the care of persons with mental illness will be disappointed. “God” is referenced a few times, but almost never trinity, scripture, or church doctrine; Ruether makes no sustained attempt to set either her own or David’s story into any narrative which is identifiably Christian. Such explicit narration is certainly not obligatory—Ruether is writing qua mother and not qua theologian, and does argue, as above, that “grace and limits” frame her care of her son—but some readers will lament a missed opportunity. Better, then, to read Many Forms of Madness for what it is: not as an expert monograph on schizophrenia, not as a definitive analysis of contemporary psychiatric practice, not as the last word of on a “theology of mental illness,” but as the unsentimental and determined account of a parent who, bucked and dragged through fifty years of caring for a son with severe mental illness, resolutely refuses to let go.