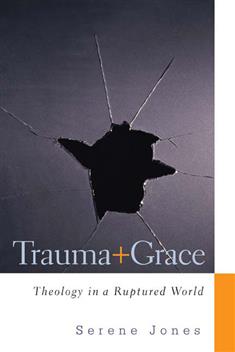 Trauma and Grace is a collection of published and new essays that attempts to address two deeply interrelated faith claims: first, that the world is broken by violence and marred by harms inflicted on each other, and second, that God loves the world and desires that suffering be met by hope, love, and grace. The essays draw from Serene Jones’ personal experiences as well as her research in trauma studies, social sciences, and traditional theological sources to answer the question “How do people, whose hearts and minds have been wounded by violence, come to feel and know the redeeming power of God’s grace?” (viii). Furthermore, how is it possible to feel God’s grace and the presence of God when the capacity to feel has been shut down?

Jones addresses the question in three ways. The first three essays bring attention to the need for the church and theologians to address the issue of trauma, both as a collective communal identity and as individuals. In her first essay, Jones introduces Leah, a woman who relapses into terror and confusion by the breaking of the bread for communion. It’s in her conversation with Leah that perhaps one of the most poignant comments of the book is uttered: “It’s not just your problem. It’s our problem—my problem, the church’s problem, God’s problem. You don’t need to be alone, and I hope we can work on it together. That’s what faith communities do” (7). But the truth of the matter is that as one looks out into the congregations much of the trauma that people experienced in their lives resides in the darkness, unspoken and ignored. It’s only when these traumas are brought to light that they can be available for care and grace. By engaging both trauma theory (including works by Bessel van der Kolk and Judith Herman) and theological discourse with the traumatized mind, Jones attempts to bring about healing by calling on imagination shaped by grace, which requires the participation of all to bring about healing and to re-narrate the story.

The second section turns to a theological reflection on the cross and the passion narrative in light of trauma theory. The cross is paradoxical because it holds within it that which is both horrendous and redemptive, both beautiful and repugnant. Jones shares a story of four women from a self-defense class in which she participated and of their reaction to the Maundy Thursday re-reading of the passion narrative. Unlike Leah, who upon hearing the words of the breaking of the bread during the sacrament was left confused and in trauma, the four women responded differently. Their response is what Jones refers to as the Christology of Mirroring. These women saw Jesus in solidarity with them when they were violated. They saw a reflection of Jesus taking their place or being on their side during the moments of violence in their lives. The question that arises from the stories of these women and of Leah is how the cross can be preached when the cross and the passion narrative leave us in silence. Jones turns to the original ending of Mark to answer that perhaps the silence, the ending that doesn’t satisfy, is the ending that is needed because it reminds us of the limitations of language and that perhaps there is value in the silence.

Finally, Jones turns to the themes of grace and sin. Jones defines sin as that which thwarts the fully flourishing participation in God’s glory. Jones is interested in how sin affects the creativity of women given Christianity’s association of sin with human embodiment, sexuality, and femininity. Specifically she is interested in the group of women that fall through the gaps in both feminist trauma theory and systematic theology: those who suffer reproductive loss. Through the story of Wendy and her own trauma, Jones shares that both feminists and theologians fail to answer the suffering of those that have experienced reproductive loss. She first looks into the three feminist tales of the self and finds that there is no room for those that are non-agential, hopeless, fragmented, and carrying death itself. Furthermore, there is no solace in theological doctrines like the Trinity. What happens when a part of the Godhead dies? Classical tradition falls silent. Jones poses that perhaps when a part of the Godhead dies the Trinity holds the death; perhaps it is like a miscarriage in that the death occurs in the womb of God. Thus Jones comforts those who have experienced reproductive loss through the image of a barren-wombed God curling around and giving comfort to the women. However, the other reality is that the image of woman and child does not take into account the reality of the cross—i.e., the reality of stillbirth, infertility, and miscarriage. Jones proposes an anti-maternal image as a way of imagining new narratives that enable a future and the possibility of grace to comfort the traumatized.

Jones concludes the book with another look at the cross. This time, however, the paradox of the cross is not what strikes her; rather she encounters the cross with mourning and wonder. It is the profound nature of the cross where we realize that we are both sinner and saint, both hurting and healing, both broken and blessed—not that we are becoming better or worse between the two, but that we just are that. It is in the middle that healing happens and that we are both undone and held together. It is in this wonder and mourning that we realize that we can stand courageously on the promise that grace is sturdy enough for all violence and trauma.

For the religious scholar Trauma and Grace brings to light the fact that traditional maternal images within the Christian tradition can fall short in providing a safe space for those traumatized. It brings up questions of what an anti-maternal understanding of the church as Mother could be. For feminist theorists, it challenges the notion of adding another version of the “self” that is broken and non-agential. For clergy and laity alike, the essays push us to truly participate in the lives of each other, to look at the liturgy of the church with new eyes and understand how it can be seen and received by those traumatized, and to realize that no problem is an individual’s problem but that it is the community’s problem.

Overall, the essays in this book encourage the reader to be sensitive—theologically, liturgically, theoretically, and practically—to the hearts and minds of the traumatized. Jones challenges those in academia as well as those in the church to approach issues of trauma with responsibility towards ourselves and others, knowing that we all do so with mourning and wonder.

By Aimee Kang
Aimee Kang is on the staff of Korean Church of Atlanta (UMC).