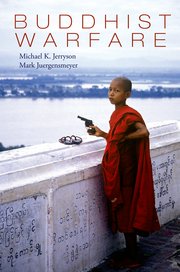 According to Michael Jerryson, one of the two editors of this important work, the main reason for writing the book was to address the misconception that Buddhism is a religion “based solely on peace” (3). Every contributor addresses two fundamental questions: “how can Buddhist scripture be interpreted for warfare? and…how is it interpreted for warfare?” (5). Across the chapters, the eight contributors present various hermeneutical strategies that allow Buddhists-over vast time periods and geographical areas, including India, Tibet, Mongolia, China, Korea, Japan, Thailand, and Sri Lanka-to justify violence by defining their enemies as not fully human; by interpreting their murder as the fullest embodiment of skillful means; by reimagining the perpetrators of war as true practitioners of Zen-informed Imperial nationalism; or by glorying them as fully enlightened bodhisattvas and Buddhas immune to the workings of karma, because they have realized the logical conclusion of emptiness: no one is killed and no one kills (a rather Bhagavad G?t?-esque act of casuistry). In addition, Daniel Kent and Jerryson provide two insightful ethnographic chapters that nicely round out the textual and historical work of the others. Kent’s work on the Sri Lankan military in particular highlights the fact that Buddhist soldiers are less interested in justifying their violence, but more concerned with finding ways to minimize the negative karmic forces they will inevitably suffer (157–77).

While some of the early chapters are uneven in quality, all are full of weighty information about Buddhist attitudes to violence, warfare, and the dharma. Vesna Wallace’s excellent presentation of Buddhist justifications for the harsh punishments employed by Mongolian rulers is, however, undermined by an unfruitful, and somewhat offhand, comparison of the medieval state with the ancient Br?hma?ic conception of kingship (99–100). Her claim that thirteenth to sixteenth century Mongolian kingship resembles in its brutality that of Vedic Indra is naive at best.The author also mistakenly identifies this god’s weapon as the cakra or “discus” when it is unmistakably the vajra (the cakra belongs to epic Kr??na) and worse this god does not wield the cakra or “discus” (that is the epic Kr??na): his weapon is unmistakably the vajra. With this said, the entire collection was a pleasure to read, and I recommend this important and timely work. Since it is such a rich and challenging resource about Buddhist martial, political, and legal violence, it can only serve to realign our understanding of this tradition in a more sophisticated and complex way.

It is perhaps fruitless then to write a review of a book that contains its own review of sorts as a final ninth chapter “Afterthoughts” by Bernard Faure (211–25). In his words, the primary thrust of all the contributors’ chapters underscores the “discrepancy between the normative claims of Buddhism and its more pragmatic approach to war and violence” (212). As he points out, most of the contributors explore this tension by rightly giving primacy to analyzing people who define themselves as Buddhist, rather than holding them up to a reified set of doctrine and ideals. For most of the scholars, it is not the case that Buddhists fail to live up to such ethical principles laid down by their founder and his followers; it is that they simply redefine how those principles are understood and embodied. It is this very tension between the authoritative interpretation of doctrine and the reality of individuals who live in complex socio-historical worlds that informs most of the chapters. Given the numerous accounts of Buddhist violence and justifications for it, Faure can conclude the volume by positing a fundamental question: are Buddhists’ claims of non-violence mere lip service because “the dharma, or ultimate reality” is “intrinsically violent?” (223).

Faure also provides the obvious critique of the book’s most problematic chapter by Brian Daizen Victoria (105–30). According to Faure, Victoria’s claim for an authentic, timeless form of (Mah?y?na) Buddhist ethics (the Buddhadharma), which Zen-soldiers failed to live up to in twentieth century imperial Japan, simply “flies in the face of reality” (216). To quote Faure at length:

In a word, there is no generic, fundamental (or even mainstream) Buddhism. It may not even be sufficient to say that we are dealing with a multivocal tradition, or multiple traditions that we could call ‘Buddhisms.’ Rather, we are dealing with a variety of people-clerics and lay believers, kings and commoners-who call themselves Buddhists. From their respective vantage points, these people hold discourses that are, not surprisingly, often at odds with each other [and I might add, at odds with idealistic textual doctrine]. Among them, some may deplore violence, others condone it, and we find all kinds of intermediate positions between pure affirmation and pure rejection, including various types of denial. (217)

Victoria’s chapter certainly contains a wealth of information about Zen-soldiers and imperial Japan’s violent appropriation of aspects of Zen ideology. This would have been enough to underscore how Zen ethics were perverted for violent ends. However, while Victoria’s non-violent agenda is laudable, his ethical commitment to a singular Buddhist Truth detracts from the hermeneutical endeavor and undermines the presentation of the evidence. It surely is reasonable to posit that a figure like Lt. Col. Sugimoto Gor? did not think that he was enacting a corrupt interpretation of the Buddhadharma (or, at least, he left no public indications otherwise). He embodied and practiced a true expression of Zen Buddhism, which nevertheless came from a violent cultural milieu that gave it legitimacy. But even this conclusion highlights an uncritical assumption that underlies Victoria’s chapter; that is, that a non-violent stance is somehow more objectively or ontologically better than a violent one. As Richard Rorty has so cogently pointed out,1 a truth claim for non-violence is no more or less provincial and contextualist than a truth claim for violence: each makes its claim in the specific socio-historical context and from particular social, economic, political, and ideological institutions. We should defend and enforce the former truth claim-the non-violent one-to the death, merely because it is the best in pragmatic terms of solidarity and charity, but we should never lose sight of the historical irony of both.

If I may end anecdotally, this all reminds me of a cautionary tale a friend who teaches in peace studies recently told me about a conversation he had with a colleague in the same field. After much Socratic reasoning over non-violent commitments in the face of Cormac McCarthy’s apocalyptic vision of the world in his novel The Road (2006),2 the discussion was reduced not to questions of non-violence, but whether it would be better to have a handgun or shotgun. After reading about the Boberg Backwards Bullpup Pistol and how it works, it wouldn’t come as a surprise to learn that people may be drawn more towards a handgun rather than a shotgun, but this just comes down to personal preference at the end of the day. This scenario is not far from many of the contributors’ insights throughout the edited volume, most especially in Jerryson’s and Xue Yu’s contributions concerning the lived violent worlds in which Korean or Thai monks have found themselves. One can only wonder about the agency of a figure like Gor? in the face of micro-sociological and historical pressures, dispositions, and responsibilities and in the face of overwhelming institutionalized discourses that normalized violence and embedded it in an economy of prestige, material wealth, and spiritual practices. But perhaps Victoria’s anachronistic claim about Zen Buddhists in Imperial Japan is not what is at stake; what is, is a warning for the future about how easily peaceful ideals of self-control can be co-opted for violent nationalist ends.