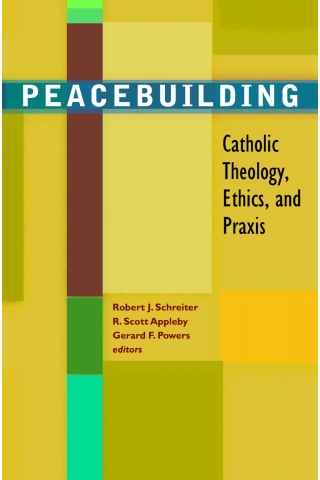 The buzzwords are familiar: conflict transformation, post-conflict reconciliation, restorative justice. Scholars of religion who hasten to express support for peacebuilding may simultaneously yearn for both conceptual clarity and substantial guidance about the potential of contemporary religious communities to advance the agenda of peace in practical ways.

Into this breach steps an impressive new volume of essays addressing Roman Catholic contributions to peacebuilding today. This volume is the first major publishing project of the Catholic Peace Network, an international affiliation of scholars, activists, practitioners, church leaders, and institutions founded in 2004 that is dedicated to defusing tensions in many lands and healing the physical, emotional, and spiritual wounds of war and civil strife. Although a majority of its contributors are American Catholic ethicists, theologians, and social scientists, this volume maintains a thoroughly global feel, since so many of the chapters present full-blown case studies or at least frequent references to conflicts in many lands. The reader comes away with particularly detailed knowledge of recent struggles for reconciliation in Colombia, Indonesia, Burundi, South Africa, Uganda, and many other parts of the world.

The book’s title suggests several of the presuppositions of this project. One is that the Catholic tradition indeed possesses significant resources to develop and enact a satisfying and constructive theology of peacebuilding. Several of these essays take pains to provide partial inventories of these resources, including elements of spirituality, ecclesiology, and theological commitments as well as practical advantages, such as the well-established capacity of the Catholic Church to exert constructive influence in conflict areas, thanks in part to a dense and worldwide network of agencies, institutions, and pastoral outreach. Of course, all of this would remain of limited and mostly in-house interest were it not for a second presupposition of this volume: that the eagerness of members of the Catholic community to share these resources is matched by an eagerness displayed by many people of good will in numerous locales to enter into a mutually enriching relationship with Catholic voices and agents. The mutual sharing of resources, peacebuilding skills, and best practices in conflict resolution holds the promise of becoming a virtuous circle capable of escaping the tragedy of endemic conflict and retaliation that has characterized so much of human history.

At least two categories of people may find themselves resisting the rich analysis provided by this volume. First, those who accept the conventional wisdom that a majority of global violence and terrorism is spawned by religious ideas and exacerbated by hatreds fueled by religious loyalties will probably find themselves unable to appreciate the enthusiasm for faith-based peacebuilding displayed in these pages. Second, those inclined to doubt that the Catholic Church is a promising partner for leadership and partnership on social issues may also lose patience with some of the viewpoints expressed here. However, many of these doubts will likely be assuaged by the final chapters of the book, which provide ample treatment of the sincere commitment of the Catholic peacebuilding community to authentic interreligious dialogue (see, for example, the landmark Catholic-Mennonite dialogue, which convened between 1998 and 2003 and culminated in the remarkable document “Called Together to Be Peacemakers”). Further, the entire focus of the book is on Catholic engagement with other actors, whether political, cultural, or religious in nature, with a particular emphasis on grass roots praxis and activism. The approach adopted by all the authors is open, dialogical, and invitational, with nary a hint of smugness or triumphalism. Reflecting the attitude adopted by the Second Vatican Council, these Catholic voices are eager to envision a church thoroughly in service to the world, not a church clinging to privileges or having a stance of false triumphalism. From these pages emerges a picture of a religious community ardently seeking partners as it proposes an attractive program of peacebuilding, not a church seeking to impose its will upon reluctant subjects as some might imagine and fear.

As with any collection of fifteen essays, readers may find these contributions somewhat uneven in quality and interest. Perhaps the most insightful of all is Daniel Philipott’s “Reconciliation: A Catholic Ethic for Peacebuilding in the Political Order.” Here the Notre Dame political scientist advances the argument that a faith-based approach to reconciliation in war-torn countries is a perfect complement to liberal theories of peace, rights, and justice. Peacebuilding and restoration of right order may indeed only be possible when attempts to break the lamentable cycle of violence and recrimination can be grounded in narratives (such as scripture) that transcend the highly rational categories of liberal theory, which, while appealing in many ways, often lack the motivational power of religious commitments. It may indeed be true that the most promising path is to build an ethic of peacebuilding that augments liberal approaches with the rich themes surrounding reconciliation found in recent Catholic social thought. Philipott’s hope that a biblical notion of justice as holistic restoration (not merely as retribution) will animate peacebuilding efforts around the world in coming decades is echoed by most of his fellow contributors to this groundbreaking volume. Several other essays pick up specific items within the wide agenda of restorative justice, proposing specific practices of reconciliation to address past injustices and to heal wounds and emotions in order to build institutions that will promise a brighter future.

Two caveats are in order on this particular subject. First, some tension will surely remain between liberal approaches to justice (emphasizing, for example, rigorous rights claims) and any vision of reconciliation that includes notions like forgiveness. Just witness the raw nerves that arise whenever truth commissions and national reconciliation programs propose offering amnesty for perpetrators of past crimes. Ethicist Todd Whitmore’s essay in this volume labels the four notions of justice, human rights, development, and solidarity as “challenging partners” to Catholic peacebuilding efforts today. These are without doubt all desirable values, but their simultaneous achievement is by no means automatic, and in some cases the realization of one erects obstacles to one or more of the others. Second, none of these positive notions proceed by means of some kind of “cheap grace”; many of the essays detail arduous but necessary processes (including the acknowledgment of past injustices, punishment, reparation, apology, and forgiveness) before true accountability, the basis for any lasting peace, can be fully achieved.

The essays in this volume repeatedly return to the insight that, in a world of endemic and protracted conflict and tragic violence, peacebuilding matters. And because it has displayed the boldness of a pioneer, even to the point of engaging and confronting armed actors in many places and on many occasions, Catholic peacebuilding particularly matters. With its insistence on the oneness of the human family, its high regard for human relationality and solidarity, and its eagerness to minister to victims of violence and to reach out to other communities of faith and good will, the Catholic Church is a worthy and promising focus for future efforts to advance global peacebuilding. This volume is by no means the final word on the topic, but it does break much new ground in opening up a constructive dialogue among multiple partners interested in religious contributions to peacebuilding. Because it renders such fine service in mapping a way forward to a more peaceful world, this book deserves a wide readership.