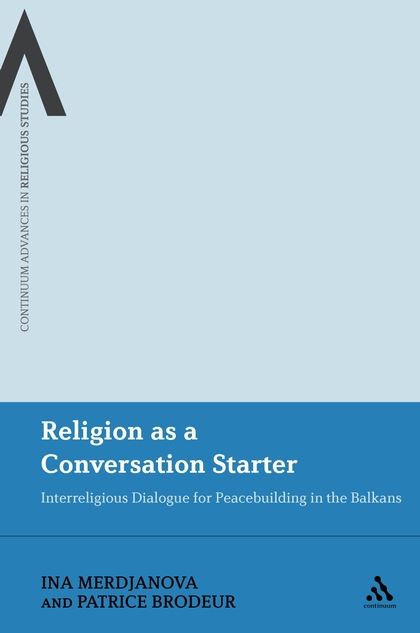 Ina Merdjanova and Patrice Brodeur interpret religious pluralism as a basically neutral condition. Whether a religiously diverse society shifts toward social indifference, respect, or conflict largely depends upon how that society arranges its institutions to engage complex religious dynamics. In Religion as a Conversation Starter, Merdjanova and Brodeur argue for interreligious dialogue as a practice central to forging peace from difference.

What constitutes “interreligious dialogue” as a practice, and consequently, what disciplines are best suited to its study? These theoretical questions occupy the book upfront. Chapter 1 funnels a densely packed literature survey toward two definitions—one “narrow” and one “broad”—of interreligious dialogue. Narrowly framed, interreligious dialogue is “human interaction and communication primarily between religious institutions’ leaders (often excluding or greatly reducing the participation of lay people and particularly women) for the primary purpose of clarifying theological/philosophical similarities and differences” (23). In the authors’ experience, this more gendered and hierarchical understanding is also more common. Merdjanova and Brodeur prefer a more open definition of interreligious dialogue as “all forms of interactions and communication through speech, writing and/or any kind of shared activities that help mutual understanding and/or cooperation between people who self-identify religiously in one form or another” (23). The broader approach offers obvious benefits in inclusivity (of both persons and communicative forms). Yet it also assists a more subtle generosity of method, in that it permits the authors to examine dialogue largely in the form of organizational initiatives (“shared activities”) rather than as the content of face-to-face exchanges. With this emphasis, the book can pose an actual origin for modern interreligious dialogue: the 1893 World Parliament of Religions in Chicago. Similarly themed programs, from national associations to local non-governmental organization (NGO) efforts, are the main subjects of both the descriptions and prescriptions of this book.

After setting their project’s theoretical foundations, the authors insert a single-chapter primer on interreligious dynamics in Balkan states (Chapter 2). The socio-political and legal sketches therein help give shape to the descriptive core of the project: structural peacebuilding developments in the Balkans (Chapter 3). A typology of interreligious organizations is introduced, here, that reflects international vs. local influence. Yet Merdjanova and Brodeur spend most of their energies examining blended types, in search of “a top-down approach…[that] has been complemented by, and creatively combined with, a grassroots interaction” (126). The authors discover some space for this fusion in national Interreligious Councils (IRCs). Although IRCs are usually top-down structures, they also prioritize local responses to local needs. Hence, even a strongly top-down association such as the Bosnian IRC complements (a) yearly meetings between national leaders with both (b) full-time employees who attend to daily needs and (c) interreligious working groups dedicated to long-term advocacy for women and youth. The Macedonian Council for Interreligious Cooperation goes further, at least philosophically, beginning with grassroots responsiveness to issues such as property restitution and religious education. Here the authors’ review of IRCs transitions into an examination of how matters such as property restitution, religious building reconstruction, and religious education embody processes of reconciliation in the Balkans.

To clarify, in this book both “grass roots” and “top-down” presume organizational intervention as prior to personal action. Corporate actions are stressed as fundamental in moving individuals past an “antagonistic tolerance” of religious diversity (40). Especially with regard to post-war Balkan societies, the authors endorse institutional repentance in order to prick the consciences of citizens. Conversely, Merdjanova and Brodeur doubt the capacity of “small intentional encounters” to motivate persons towards peacebuilding (74).

This structural approach extends to the book’s concluding chapters, which identify “exemplary practices” and “challenges” (Chapter 4), before making thirty-four policy recommendations in four areas: interreligious dialogue, international organizations, governmental actors, and local-international cooperation (Chapter 5). Chapter 4 portrays interreligious dialogue in the Balkans as still in a fragile infancy, nourished by interreligious youth walks and the Bosnian interreligious choir, Pontanima (from Latin, “Soul Bridge”). At the same time, the authors point to public confusion over the functions and intentions of interreligious dialogue—in particular a suspicion that organizational initiatives serve outside rather than local goods—as contributing to the sense that dialogue is still “at the level of solemn meetings…[that do] not touch real problems” (116).

The policy recommendations in Chapter 5 are wide-ranging; this review mentions two prescriptions that explicitly address religion. First, the authors push urgently for “basic religious literacy [for] all citizens” (134). To meet this demand, a rigorous program of education that ranges from elementary school courses to media training is promoted. Second, the authors advise “international agencies to contextualize their understanding about the specific roles of religion in the different Balkan countries,” in order to avoid either “neglect[ing] the religious element or…assum[ing] its power beyond what it really is” (127–128). Both points, but especially the second, raise important questions about the religious content of Balkan conversations.

Consider, for example, that Merdjanova and Brodeur describe Balkan populations as “sociologically” religious (i.e., by birth, ethnicity, or tradition)—noting that the number of “practicing believers… is relatively low” (47). Should this affect an understanding of their dialogue as interreligious as opposed to, say, intercultural? The authors observe an international trend towards the term “interreligious” and away from “intercultural” in similar cases, a development which they at least partially attribute to the deprivatization of religion (37–38). But a secularization focus addresses neither the content of religion nor that content’s power in dialogue. Leonard Swidler offers outside assistance here. According to Swidler, interreligious dialogue affects three dimensions: “the practical, where we collaborate to help humanity; the depth or ‘spiritual’ dimension, where we attempt to experience the partner’s religion or ideology ‘from within’; [and] the cognitive, where we seek understanding [of] the truth.”1 Examining Merdjanova and Brodeur’s project through Swidler’s lens, it appears that Religion as a Conversation Starter inhabits the practical dimension rather earnestly, while being less sure-footed on spiritual and cognitive grounds. In this sense, the book invites a deeper conversation beneath its structural language.

If readers will lament any aspect of this book, it may be the takeaway feeling that religion is not really starting conversations in the Balkans. Merdjanova and Brodeur invoke Richard Rorty’s provocative essay in order to rebuke it—to argue instead for “religion-related issues as a good starting point for important conversations between people of different worldviews” (9). Yet, framed in this way, it is not evident that Rorty would disagree. In his original paper, Rorty does not reject public engagement of religion-related issues but public reasoning via nonpublic sources of justification, e.g. “the will of God.”2 In a follow-up essay (“Religion in the Public Square: A Reconsideration”), Rorty expresses concern not with parish-level searches for meaning but with the instrumentalizing of religious power for political ends.3 With this in mind, it seems possible that interreligious dialogue’s starter is not religion but a horizon of peace—and/or a background of war. Certainly no one can be blamed for desiring to steer religiously plural societies towards reconciliation and away from violent conflict, but, as Rorty knew and as Balkan peoples know too well, fueling politically practical aims with religious means carries (often hidden) risks.

Nonetheless, one reality remains quite in the open: religiously diverse persons need to be able to speak with each other, unless either religion or society opts for public silence. The authors of Religion as a Conversation Starter seek a robust religious pluralism, one rooted in authentic dialogue that reaches deep issues. The book aids its own labor greatly, not least through its thorough review of structures that make interreligious dialogue available within Balkan states. The book also contributes to several disciplines by honing a particular concept of interreligious dialogue and locating its formal study. In short, Religion as a Conversation Starter introduces critical spaces within which both practitioners and scholars of religion might speak with one another. Those spaces now anticipate the actual conversations through which people might shape and share their futures.

By Jeremy Lowe
Jeremy Lowe is a doctoral candidate in the Ethics and Society course of study at Emory's Graduate Division of Religion.

Cite this article as: Jeremy Lowe. "Religion as a Conversation Starter: Interreligious Dialogue for Peacebuilding in the Balkans." Practical Matters Journal (March 1, 2012). http://practicalmattersjournal.org/?p=503.