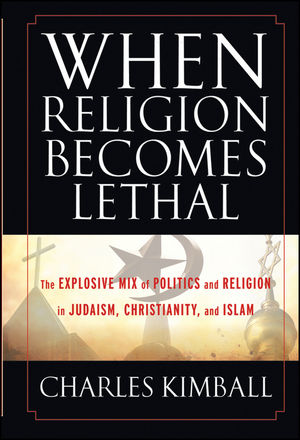 As the title of the book When Religion Becomes Lethal implies, author Charles Kimball aims to educate the reader about the sensitive relationship between the great monotheistic religions, Judaism, Christianity, and Islam. Education is a crucial piece of combating the volatile and even lethal consequences that may occur when believers clash with others inside and outside of their religious traditions. When political agendas and extreme religious beliefs are mixed, violence oftentimes is a consequence. Kimball attempts to inform his audience about why this is the case and to offer sensible and sagacious advice about how people of faith might lay the groundwork for a more hopeful future. He is urgent in his tone, imploring the reader to recognize the importance of understanding past and current events. Kimball does an impressive job of tackling the immense topic by providing an overview of religious belief and historical information while also addressing the current challenges and concerns of the contemporary context in his excellent and approachable book.

Simply stated, the structure of the book addresses two broad topics. First, chapters 2, 4, and 6 discuss and review what Kimball refers to as “…foundational principles that are found in the Hebrew Bible, the New Testament, the Qur’an, and the hadith…” (13). Second, in chapters 3, 5, 7, and 8, Kimball provides overviews of recent challenges that demonstrate issues believers of these religions face in their various historical and geographical contexts, focusing specifically on Israel, Iran, Iraq, and the United States. Framing these core chapters of the book, Kimball begins by providing insight regarding his interest into the complicated relationship between politics and religion among the Abrahamic faiths. A professor with a Ph.D. from Harvard in comparative religion and also an ordained Baptist minister, Kimball possesses unique expertise. His academic work has been significantly focused on politics and religion in the Middle East. Visiting that part of the world over forty times, he even met with the Ayatollah Khomeini during the 1979 Iranian hostage crisis. Kimball’s ancestral heritage is both Jewish and Christian. It is apparent in his writing that Kimball is passionate about his topic for multiple reasons, as a scholar and as a person of faith interested in politics and peace. He concludes the text in chapters 9 and 10 with a mixed message of warning and hope. While he warns of the dangerous results that have occurred and will continue to occur when human beings link fundamentalist religious ideologies with narrow political agendas, Kimball also gives hope by focusing on the constructive role that religious adherents of Judaism, Christianity, and Islam may play not only in their own futures but in the future of the world.

Addressing some of the most challenging and difficult ethical issues of our time, Kimball’s message of hope is his assertion that within Judaism, Christianity, and Islam, there exists an inherent flexibility that allows religious believers the ability to bend with the times and to concurrently contribute positively to their present circumstances. At the same time, however, he warns that within each of these religious traditions, extremists deny such flexibility and may work against freedom and diversity by employing violent tactics. Kimball offers specific examples of how adherents in each tradition have developed different approaches to politics based on their religious teachings and interpretations, fully recognizing that religious people are also political people and that the relationship between politics and religion is a long and complicated one. For example, Kimball provides a fine overview of how some Christians in America utilized biblical texts to support the institution of slavery and policies like Manifest Destiny. Further, he addresses recent realities, such as how Christians currently work within the American political system, especially those Christians that are fundamentalist. Kimball provides a clear picture of the interplay that has occurred and will continue to occur between politics and religion, and this enables the reader to move into new territory equipped with a firmer foundation. For example, religion is a topic already at play within current presidential conversations. Think of Mitt Romney and Mormonism, or President Obama and the repeated questioning of his religious loyalties. Kimball’s book reminds readers that this conversation is not unusual; people have been discussing politics and religion throughout history. The tragedy occurs when productive discussion is rejected for violent action.

Kimball disseminates a vast amount of information on the lethality of religion, all of which is rooted in extreme fundamentalist beliefs involving narrow interpretation of texts and traditions. From Baruch Goldstein’s 1994 massacre of Muslims worshiping in a mosque in Hebron to the terrorist attacks of September 11, 2001 in the United States, Kimball provides example after example of how the interchange of politics and religion can lead to hateful speech and violent action. With a small number of religious adherents advocating such violence, Kimball reminds Jews, Christians, and Muslims that engaging in the challenging conversation of politics and religion can indeed be constructive (179). By striving to become religiously literate, reaching out to others in good will, encouraging interfaith dialogue, and furthering the ideal that America has offered but not always lived up to, that of promoting political responsibility and religious freedom, Kimball suggests that people have the potential to move forward together in a positive way. The major challenge currently faced by an America with a Christian majority is to promote informed discourse, with distinctive attention given to advancing a wider understanding of Islam in the United States.

This is an accessible and well-structured text. Above all, it serves as a reminder that while people of faith may not agree, they must recognize their interconnectedness and commit themselves to peaceful coexistence. While the picture that Kimball paints historically and contemporarily may seem bleak, the hope he offers is also significant. He advocates a grass roots approach to preventing future violence. Religious adherents should really know one another. This interconnectedness, an understanding and promotion of interfaith dialogue, combined with political responsibility and a respect for personal religious freedom will give people of different faiths an opportunity to move forward together in a positive way.

By Sally Holt
Sally Holt is Professor of Religion at Belmont University.