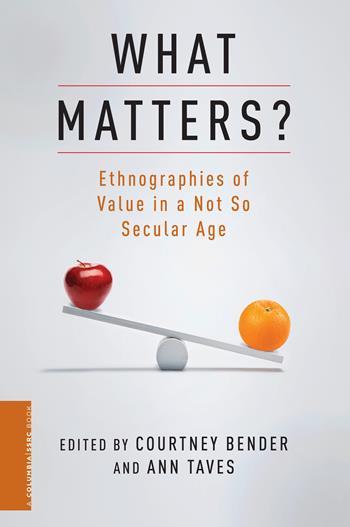 Recent research on the category of the “secular” has demonstrated that secularism is a discursive project embedded in relations of power, historically contingent, and as manufactured as the category of religion. While this scholarship has successfully called into question the use of secularism and secularization as scholarly categories, much of it continues to promote an etic viewpoint, with academics labeling particular cases as secular or religious. Furthermore, these scholars continue to employ a “secular-religious binary” which ignores social actors’ use of such “third terms” as spirituality, which destabilize scholarly categories like secular and religious (5).

Courtney Bender and Ann Taves, editors of What Matters? Ethnographies of Value in a Not So Secular Age, instead privilege emic perspectives and highlight language about spirits in order to explode this etic binary distinction. Rather than positing one case as secular and another as religious, Bender and Taves suggest that scholars follow the language which subjects themselves use as they deem certain experiences or things as valuable, secular, spiritual, or religious. Moving beyond theoretical discussions of these terms, Bender and Taves invite the volume’s contributors to explore how subjects reflexively label their experiences as special and how these classifications are enmeshed in social structures that enable or restrict the articulation of value.

The editors and their contributors view practices as processes embedded in social and relational contexts, and they tend to focus on practices that lie outside the usual religious institutions and settings. In analyzing these processes of valuation and their contexts, the authors emphasize experience, authenticity, and authority as loci especially well-suited to revealing how actors deem things as special. In the modern world, subjects often make such valuations “self-consciously, such that the things they value appear to them as at once made and discovered, created and yet real” (28). Over the course of eight essays, contributors tease out these valuations and their social contexts.

The first two essays are historical inquiries. Silvia Tomášková examines how religious and secular ideologies influenced early French prehistoric archaeology by contrasting two scientists: one, an anticlerical materialist who argued that there was no clear evidence that early humans were religious; the other, a priest who claimed that early human symbolic activity, such as cave paintings, signaled the capacity for religious expression, thus reframing spirituality in terms of creativity. In this sense, the interpretation of prehistoric art and artifacts served as a proxy for secular and religious commitments on the part of scientists. In a similarly savvy piece, Christopher White charts how different nineteenth century actors utilized the psychological category of suggestibility for various ends, moving from psychologists who explained away religion as an irrational response by overly-gullible people, to liberal mainline ministers who used the suggestibility label to dismiss so-called excessive religious experiences, to religious liberals like New Thought preachers who used suggestibility to build faith in adherents. His article successfully shows “how categories originally fashioned to explain religiousness in secular terms also could be used to reform, and in many cases, promote belief” (82).

The other six essays utilize ethnographic approaches. Using her fieldwork in Ghana as a touchstone, Birgit Meyer asserts that even a modern secular state can be suffused with spirits, such as when politicians seek out the help of folk diviners for electoral success or when Pentecostal discourse pervades the public sphere, thus demonstrating that spirits are not just “signs of a traditional past” but are “reproduced under modern conditions” (88). Both sides, traditionalists and Pentecostals, assert that the spiritual realm underlies the physical realm, that these categories commingle ceaselessly, and that secular politics is influenced by spirits. As her case study shows, secularization and enchantment are not mutually exclusive.

Two essays explore the spirituality of humanitarian work. Erica Bornstein analyzes Indian volunteerism as a secular transformative experience, noting how volunteer projects create an emotional crisis for participants, who then value it highly and even promote it through a discourse of positive transformation which encourages others to participate. Peter Redfield, in his analysis of secular humanitarianism in Médecins Sans Frontières, compares the global humanitarian relief efforts of modern medical professionals with earlier efforts such as those of the Red Cross and Albert Schweitzer. In tracing the histories of these various groups and their motivations, Redfield detects a shift in focus from a missionary endeavor to convert patients and promote painless deaths toward a secular mission to preserve life itself without concern for the afterlife. This new goal, Redfield asserts, imbues a “sacred value” to and a “secular faith” in modern medical care (145, 162). Despite that claim, however, the language of sacredness does not appear in the language which MSF doctors actually use; it appears, instead, to be imposed by Redfield.  This is a rare misstep in this mostly subject-centered volume.

In an essay which carefully follows her subjects’ language, Rebecca Allahyari analyzes how parents who homeschool their children reify quality family time, revealing a quest for enchantment through “devotional parenting” (181). Parents who enrolled their children in a public charter school targeted toward homeschooling families found that the “rigors of the educational demands appear to stifle enchantment,” as parents attended teaching classes which took them away from their children (185). Many of these parents ended up leaving the school, again infusing the domestic sphere with the meaning they sought through homeschooling.

Jeffrey Kripal explores the contested terrain of consciousness as studied by members of Esalen’s Sursem group. Kripal’s main aim is to show how scholars of consciousness, and of religion generally, reveal their personal metaphysical commitments through the methods and theories they deploy. Secular materialist views of consciousness and religion cannot get at the core experiences of religious actors, he claims, and so current sociology is inadequate to explain the uncanny experiences that he asserts are the hallmark of religion. “To even begin to engage the truth claims of the religious traditions at their best,” he argues, “we must engage the principle that the human species shares common forms of consciousness, agency, and moral integrity, and that these are transmissible and replicable and not simply epiphenomena of local political, economic, and social practices” (222). Kripal’s ethnography of Sursem appears as a semi-autobiographical depiction of his own journey through secular metaphysical commitments to a synoptic empiricism, one which seeks to move beyond linguistic and social constructions of experience, and beyond even the processes of valuation given to such experiences by subjects, to the direct encounters themselves—a task which challenges the project set forth by the volume’s editors.

Finally, Graham St John explores tribal aesthetic experiences in global psytrance culture, positing that viewing raves as religion allows scholars to account for the collective spirituality many participants claim they experience when they talk about feeling “transcendence” at raves (250). This desire for alternative community is a sort of reenchantment which is experienced both ecstatically and reflexively by ravers seeking authentic experiences even as they consciously fashion them. Unfortunately, St John talks about psytrancers more than he lets them talk, making his exploration less emic than he portrays it to be.

The success of the volume can be measured by answering the question: to what extent do the contributors analyze the ways that subjects—as opposed to scholars—deem experiences as religious, spiritual, secular, or other?  On this benchmark, What Matters mostly succeeds. White and Allahyari, in particular, pay close attention to their subjects’ articulations of value as well as the larger social contexts in which these claims are reflexively made. Other authors, such as Redfield and St John, fulfill this volume’s goals less well. Despite these shortcomings, the overall quality of the essays is excellent, and the authors’ careful attention to their subjects’ own language and experiences should serve as models for other scholars.

One may ask, however, where the accumulation of these particular valuations takes us. While it is an important intervention in secular studies and in the sociology of religion, where do we go from here? Focusing on emic perspectives suggests an inductive approach to building theory, but Bender and Taves seem to eschew any grand narratives or theories about secularism, religion, or spirituality. On a theoretical level, several authors interrogate whether secularization entails disenchantment. Meyer, Allahyari, and St John all argue that despite a secularized social order, people’s lives remain enchanted, whether through spiritual discourse, questing for quality family time, or participating in trance culture. More of these theoretical engagements in the book would make the whole more than the sum of its parts. As it stands, this volume makes for a provocative addition to a graduate methods course, although selected chapters would be more accessible for undergraduates.

By Dusty Hoesly
Dusty Hoesly is a doctoral candidate in Religious Studies at the University of California, Santa Barbara.