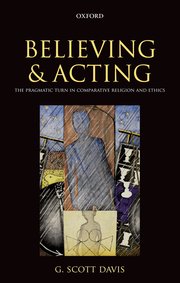 In his recent Believing and Acting, G. Scott Davis identifies a problem in the study of religion. He does not claim this problem to be, as with so many others, a fatal issue, like critics who argue that there is no such thing as “religion” to study. Instead, he wants us to accept that some of the major forms that religious studies takes are either too grandiose (cognitive studies) or too limiting (postmodernism) and that both claim an authority—really an efficacy—that neither can prove. The problem, then, is not so much a chronic disease as it is a serious, yet curable aliment. And the inoculant is not another theory but the application of pragmatism to guide our methodologies and approaches, particularly a pragmatism influenced by C.S. Pierce.

Davis says his book focuses on comparative religious ethics, and though true, it also has broader implications for the field of comparative religious studies more generally, as well as the history of religions. The broad applicability is made immediately clear in the introduction, where he targets nothing less than theory in religious studies as the problem to be addressed. This is a tricky moment for the reader of Believing and Acting, for Davis does not fully define what he means by theory. The reader must feel this out along the way without reading his or her own biases into Davis’s words. This is interesting, as reading oneself too much into one’s object of study is, as we will see, one of the tendencies that Davis wants to eliminate through the model he describes in this very work.

What does Davis mean by theory, then? We begin to understand this when he opposes “theory” with “truth” as the goal of scholarship. Such a claim will make many bristle, but his understanding of truth is not, he argues, the colonizing goal, grounded in a sense of universal reason, that gave rise to feminist, post-colonial, and postmodern critiques in the first place. Instead, his focus on truth rather than theory is meant to clarify. First, he argues that most, if not all of us, engage in scholarship because in some way we hope to say something true, something that reflects what is really going on. In other words, he calls truth the goal of scholarship not as a recommendation but as a call for scholars to be honest about their motivations. We should all recognize and reflect on this common motive. This leads to an understanding of scholarship as always reaching toward the truth, though never quite getting there, like Reinhold Neibuhr’s “impossible possibility.” If we are aware of what motivates us, we can better critique it and understand the limitations of what we hope to achieve. This, at least, should be freeing to some, if not many.

When he talks about theory, Davis has in mind, it seems, two specific pitfalls. The first is the tendency to create theories that claim universal principles or truths shared by all. For Davis, there is very little that we can really be sure of. He doubts whether “there are any fundamental truths about human experience beyond birth and death” (4). What we can know is not universal, but instead, must be grounded in the local. He takes as his foil the cognitive study of religion, which attempts to explain religious belief and behavior through biological structures. Davis’s critique is that such scholars are too “wide-eyed” about what such a study can achieve. Out of good science and biology, they build a house of cards with conclusions not supported by the empirical research. Although Davis is a proponent of religion scholars taking advantage of the natural sciences, the output of such sciences cannot provide the certainty that universal theorists seek and/or claim.

Even as he argues against universal theories, he also argues against the tendency to privilege, to an extreme, the particular. Here he criticizes postmodernisms that seem to make particular locations or cultures islands unto themselves, impervious to our comparative attempts. Such scholars, he argues, go too far. Postmodernism is a slippery term, and Davis perhaps uses it without the needed qualifications and specifications. He also spends more space on cognitive studies than on postmodernism, which does not aid our understanding of his understanding of the postmodern. But it is perhaps enough to know that he employs these categories—postmodern and cognitive studies—rhetorically, at least in part, to set up his defense of what is central to his book, the creation of a pragmatic comparative approach.

Davis acknowledges his debt to those before him who have seen the importance of pragmatism in methodology. These include Mary Douglas on Durkheim, Clifford Geertz on Max Weber, as well as Wayne Proudfoot and Jeffrey Stout. He argues, however, that these scholars did not adequately explore the possibilities for comparative work that pragmatism offers. To that end, Davis aims to create, through his reading of Pierce’s pragmatism, a foundation, including the necessary guides, for comparing different religious ethics and religious traditions, one that avoids the twin methodological dangers of cognitive studies and postmodernism. By doing this, he argues that he can show how we can use the fruit of such comparisons to guide our ethical reasoning on some of the day’s most sensitive moral issues, as well as advance the legacy of the pragmatic turn, as he labels it.

Davis adopts Pierce’s understanding of inquiry, which is, to put it briefly, the search for firmer knowledge in the face of some occasion brought about through one’s evaluation of different scholarly accounts of some topic that gives rise to doubt. Further, this inquiry according to Davis requires a comparison of different religious ethics that has, at its methodological core, an accountability with two vectors. The first vector is outward: the scholar should be knowledgeable enough about the tradition under study so that he or she can create an honest inquiry that takes seriously the tradition’s or object’s own history and context. This, it seems, is an argument against making the object of study instrumental to one’s own needs or culture. Davis draws on Michael Baxandall’s methods in art history to help articulate this. The second vector points inward: the scholar needs to be self-reflective enough to know whether or not he or she is taking the object of study in its own terms—at least, as much as humanly possible—or is abusively appropriating it to serve his or her uncritical motives and agendas. Here, Davis points to inquiry as a discipline, not only in the formal sense but the formative sense, of those practices and habits of mind needed to do the work honestly and well. In other words, one must know her field of study well, and herself equally so.

It may be appropriate, then, to label Davis, who is a religious ethicist after all, as a “responsibilist,” a moniker that comes from the study of ethics. A responsibilist, to speak generally, is responsive to and for multiple sites of accountability, and Davis advocates for this orientation in scholarship. In an interesting move, Davis shows in Chapter 7 how this is not to be done by critiquing Richard Miller’s interpretation of Thomas Aquinas’s ethics of war. Davis argues that Miller brings his own vocabulary into his study, a vocabulary alien to Aquinas. In this way, Miller demonstrates a lack of self-reflectiveness that, according to Davis, any scholar needs to have to live up to the pragmatist approach.

The disciplines that Davis recommends the ethicist draw from are history and ethnography. One must create the best available reading, taking into account and evaluating existing scholarship, “informed by the best available ethnography set in the best available historical narrative” (3). This includes the virtue of self-reflection in evaluating such material, but also provides an emphasis on locality and being true to the history, beliefs, and motives of those under the microscope. In this, Davis takes his cue from Clifford Geertz’s interpretive anthropology, where comparison is done with particular attention to conscientiously and honestly rendering the local culture and how religious actors experience and understand their own beliefs and actions into terms we can understand.

Davis, however, is also a comparative ethicist and wants ethnographies to do more than an ethnographer might. Such comparisons, if we follow the methods and guides above, give us the opportunity to create more clarity around our current moral dilemmas. The example he uses in Chapter 8 is abortion, and the comparison is between Christian, Jewish, and Japanese Buddhist traditions. Davis argues that, although reproductive issues and the status of life are important to all three traditions, they do not understand the issues in the same way. Each has a different discourse about when life begins, and each evaluates activities taken in relation to the fetus through a differing moral lens. He takes from his comparison, “the fruit of interpretive testing,” that we should not emphasize pre-natal stages in our ethics (5). Such emphases can lead to interminably problematic issues, such as granting a fetus full human rights. Instead, he draws from his ethical comparison a conclusion with which we can help derive policy; that is, we should look at the post-birth context for our ethical reflection. As a true pragmatist, however, he does not fool himself into believing that his argument is the final word on the subject.

If it seems that some of Davis’s suggestions are obvious to a seasoned scholar, then the reader would not be mistaken. Davis’s intention is not to argue for new trails to be blazed. He acknowledges that pragmatism is nothing new in religious studies and ethnography, nor is historical research. He does not affirm all pragmatic approaches and is particularly critical of Ann Taves’s approach. Davis, then, resonates with certain postmodern accounts that interrogate the social location of the scholar, yet by throwing postmodernism out too quickly, he may be removing this additional emphasis of self-reflectivity, which would only seem to build on his approach. He also insists that self-reflectivity is a capacity, and I would argue a virtue, but does not say exactly how this disposition is to be inculcated, other than following Pierce’s method. Is there a nascent pedagogy that Davis needs to unpack? Davis’s audience is also fellow scholars, and this book assumes a reader with a good deal of knowledge about the field. In the spirit that Davis invokes, his book should be investigated and critiqued to further our conversations about what we do when we study religion. But Davis has certainly created an interesting read that, as we debate cognitive studies and the legacy of postmodernism, offers important and timely reflections for the field.