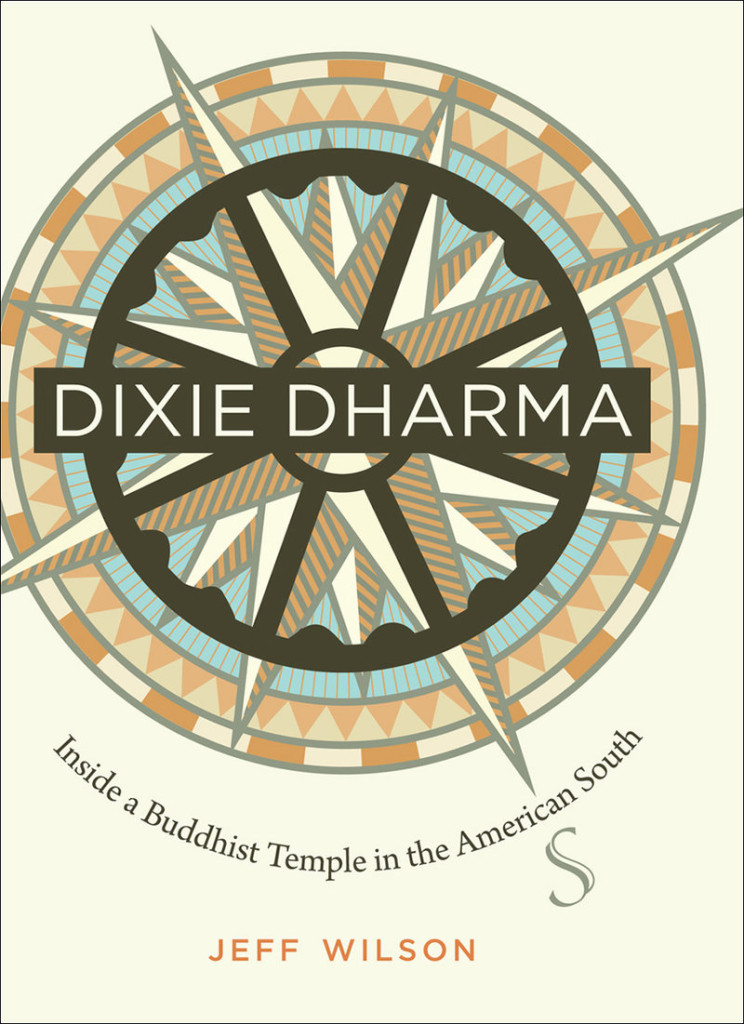 This is a book about Buddhism in the Southern United States today. In what is apparently a reworking of a doctoral dissertation, Jeff Wilson argues that place influences how Buddhism is experienced by its practitioners and that Buddhism, in turn, influences its surrounding culture. What that means is that Buddhism in the South is pluralistic and different from Buddhism practiced in other places. Wilson makes these points about pluralism and regionalism by studying the tiny community of Ekoji Sangha, which meets in a small house on Grove Avenue in Richmond, Virginia.

After an opening chapter on the importance of regionalism in the study of North American religion, Wilson sketches the history of Ekoji, focusing on the career of its founder, the Reverend Takashi Kenryu Tsuji. Tsuji was born in 1919 in British Columbia, the son of Japanese immigrants. He dedicated himself to becoming an ordained minister in Jodo Shinshu, the sect he was raised in. He went to Japan, studied in Kyoto, and was ordained. On the eve of the Second World War, he returned to British Columbia, only to find that, with the outbreak of hostilities, Japanese were being relocated from the Pacific coast in Canada and the United States.  He undertook the work of ministering to the Japanese diaspora in eastern Canada, relocating in Toronto. During those years, he functioned in a manner that Wilson styles as a Buddhist circuit rider, recalling the Methodist circuit riders of the nineteenth century. He went from small group to small group, teaching, counseling, and establishing communities. In 1959, he was appointed to the newly created position of director of the Bureau of Buddhist Education at the San Francisco Headquarters of the Buddhist Churches of America (BCA). A decade later, he was elected bishop of the BCA, at that time the only second generation Japanese-American to have held the post. During his thirteen years in that position, he introduced modern American-style managerial techniques to the organization and encouraged engagement with American society, even establishing Boy Scout and Camp Fire Girl troupes at BCA centers.

In 1981, after retiring as bishop, Tsuji dedicated himself to spreading Buddhism in the Southeast. He established a sangha in Springfield, Virginia, a Washington suburb, and later opened Ekoji in a small house that the organization purchased on Grove Street in Richmond. Richmond, however, was not San Francisco. It did not have a significant Japanese-American population. In Richmond, Ekoji drew a group of newer immigrants from Vietnam, Thailand, Cambodia, and China, plus a motley crew of white college professors, students, aging hippies, and mush-headed New Agers. Soon, it became evident to Tsuji that his dreams of founding a Jodo Shinshu temple would have to be modified to meet the regional realities. He opened the doors of his modest house-temple to several Buddhist groups in Richmond that lacked even the tiniest places of their own. The result is that while there is no Jodo Shinshu in the pure form Tsuji once taught at Ekoji, the temple has continued as a Buddhist center where pluralist Buddhism is practiced among five different groups that call Ekoji home and that share space, symbols, and over time, rituals and practices. This Wilson labels “hybridity,” without really unpacking that term. Unlike a Homi Bhabha, whose ideas about hybridity carry multiple levels of meaning, for Wilson, it means simply that there is a lot of mixing and sharing going on at Ekoji among immigrant and non-cradle Buddhists who largely are comfortable with a pluralistic approach to Buddhism, and often, to other religions as well.

One of the groups at Ekoji is a Pure Land group, which stresses the salvific powers of Amitabha Buddha and longs for life in the nirvanic Pure Land. But strict Pure Land Buddhism, popular in China and Japan, is less so among Richmond’s motleys, some of whom see it as too close to Christianity with its Christ-like Buddha and Heaven-like Pure Land. So over time, the Pure Land group has been composed mainly of immigrants, now predominately Chinese Americans.

More appealing to the white members is the Zen group. Wilson interestingly styles the Zen practiced at Ekoji as a “modernist” Buddhism that stresses individual meditation, silent meditation, minimal ritual, and minimal symbolism. Its leaders at Ekoji include non-Asians familiar with Zen from its Hollywood incarnations and from years of practice in various venues.

Another group popular with non-immigrants is the Tibetan group, owing to the fame of the Fourteenth Dalai Lama and his wide acceptance in the West. Tibetan Buddhism incorporates elements of tantricism and is an outgrowth of the Mahayana tradition. It believes in the reincarnation of awakened beings, like the Dalai Lama, who return to earth to educate the unenlightened.

A fourth group meeting at Ekoji is the Vipassana group. It claims to originate with the original Buddha Gautama and is an outgrowth of the Theravada. In America, it is usually practiced by Thais, Sri Lankans, Burmese, Cambodians, and Laotians. An immigrant group met at Ekoji for years but by the mid-1990s had disappeared. Then a new group, led by whites, emerged, incorporating elements of Vipassana and adding to it things they liked from other traditions.

We learn about the differences in liturgies among these groups and in the ways they utilize the small space at Ekoji for worship. The process of sharing space, Wilson points out, means that the groups share religious symbols, often unintentionally. But that process of sharing has an effect on their conceptions of their identities and softens the boundaries between the groups. As one Chinese-American Ekoji member put it: “Buddhism is Buddhism. There’s no such thing as ‘not my Buddhism’” (121).

Wilson also includes a chapter about how Buddhism influences the culture of Richmond. He describes a vigil meditation that members of some of the Ekoji groups performed at the Slave Trade Reconciliation Triangle, a monument to the slave trade on East Main Street in Richmond. From his account, it is hard to determine just how big a part of the lives of Richmond Buddhist social outreach is. By presenting this example, he leaves the impression that social outreach is not a big part of Ekoji. Certainly, there is no equivalent of Catholic Charities or the American Friends Service Committee that represents a major commitment by its host religious group to social witness.

Wilson’s book offers a fascinating look at Buddhism in the Southeast that reflects the shifting patterns of immigration and the new religious appetites of Americans in an increasingly pluralistic age, from which, even the South apparently cannot hide. He skillfully employs the tools of sociological and anthropological inquiry and portrays an awareness of the larger scope of the religious history of the region he studies. His work is a testimony to the new directions that the study of North American religion has taken in the last generation. We have moved away from the magisterial histories of the major religious groups to studies of the non-elite participants in the American experiment, often minorities, in the case of the Ekoji group, tiny minorities. The value of this is that we see with new eyes the importance of a small house on Grove Street in Richmond and a handful of Buddhists. We also see religion as the lived experience of the Ekoji practitioners. Wilson shows us what Buddhism in Richmond looks like today. His indefatigable curiosity, patient observation, and detailed analysis open many new avenues for further study and reflection, which he is careful to point out. His insistence that American Buddhist studies should take more seriously the differences among regions is fascinating, especially differences other than those attributable to immigration patterns. He could make more of the similarities and differences between Ekoji and other small religious groups in the South, but his awareness of these similarities and differences is signaled throughout the book by his creative borrowing of terms like “modernism” and “circuit rider” from the dominant Christian tradition.

Yet, at times, his methods also hinder his larger aims. Wilson at moments shows genuine sparks of creativity in his writing, as one sees in the playful, wonderful title of his book: Dixie Dharma. Those sparks are never allowed to kindle into a compelling narrative, however, largely due to Wilson’s obligation to the academy and the fads of the day. For instance, large amounts of academic jargon are larded into the story, which detracts from the flow of the narrative methods, reified, become ends in themselves. Consider this sentence: “The unifying substrate to this book’s twin themes of pluralism and regionalism is the call for fine-grained attention to place (body, artifact, room, building, neighborhood, region) as well as movement in the study of American Buddhism” (218). Wilson tells us too often that he is going to do something, clears his throat with words borrowed from literary criticism like “hybridity,” and then tells a bit of the story, never really finely grained, always lecturing, never singing.  The story suffers. The narrative is crushed. The analysis is too deliberate, too obvious, too self-conscious. In the end, we learn less than we were promised, because we were promised too much, and half the time with the imposition of loosely reasoned “theories” we were not sure what we were promised. It would be better to hear Wilson’s own voice, free from the influence of his mentors. This book is a strong indication that that voice could be eloquent indeed.