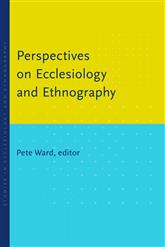 As the first in a projected series on the topic of ecclesiology and ethnography, this inaugural volume, edited by Pete Ward, offers a “proposal” (or really a set of proposals) for a theologically-oriented approach to qualitative research. The twelve essays are divided into two parts: (1) “the proposal” and (2) “the conversation.” Unlike many edited collections of differently authored essays, this one holds together exceptionally well as a distinct conversation, despite the fact that the essays are not structured explicitly as a conversation with one another. While the volume will quickly be recognized as indispensable for practical theologians, it is equally valuable for systematic theologians, ethicists, and scholars in the field of religious studies more generally.

The proposal itself arises from a perceived gap between empirical and theological analyses of the church. Each of the essays argues for theologians to use ethnographic research (understood broadly as including virtually any form of qualitative research) if what theologians want to say about the church is (1) to take seriously the actual practice and social context of the church and (2) to be taken seriously by the church. The authors are not here proposing what is often termed a “correlation” between theology and the social sciences but rather a culturally and socially situated theology and, at the same time, a theologically-informed ethnography. One can readily guess that such a proposal is complex and raises a number of issues and questions, such as how ecclesiology is best served by an integration of deductive and inductive approaches (discussed by Paul Fiddes) or how the discipline-related conversations within which a researcher is situated or indeed the researcher’s own subjectivity and experience during the research process (discussed by Pete Ward) shape what is observed by that researcher.

Christopher Scharen argues for a “carnal theology” born out of something like an “apprenticeship” in which the theologian explores the bodily practices of the church within the particular contexts that help make sense of them. Likewise, Mary McClintock Fulkerson demonstrates how her own research has attended to bodily knowledge and communication techniques within a congregation where embodied practices far exceeded written or linguistic materials and thereby expanded and complexified her theological categories for understanding and interpreting the church’s practices of welcome and inclusion.

If Scharen calls for a “carnal theology,” John Swinton moves in something of the opposite direction, but with a common purpose, by calling for a “sanctified ethnography.” Swinton has in mind an approach to ethnography that attempts to avoid not only the “methodological atheism” of the social sciences but the “methodological deism” of Christian ethnographers in which “the possibility of the real, active presence of God within the research process is downplayed, psychologized, or withdrawn completely” (80). Swinton instead embraces the Christian researcher’s theological starting point, reflexivity, and interpretation that comes from “living in” and not only “looking at” the church that is being investigated (Swinton goes on to suggest that the relationship between theology and the social sciences is better summed up by the metaphor of hospitality rather than correlation).

Essays by Elizabeth Phillips, Alister McGrath, Luke Bretherton, and Richard Osmer reveal the deficiencies of ecclesiological approaches that engage wholly in abstract judgments, and each of the authors offers an impressive case for intentional and careful engagement with and attentiveness to particular Christian congregations, with all their complexity, in assessing and constructing theological and ethical claims and in forming judgments about more faithful Christian practice. An essay by Clare Watkins et al. textures this attentiveness further by emphasizing the ways that ecclesial practices are themselves properly theological and bearers of ecclesiology so that investigating them enables “a fullness of theological perspective, an integrity of ecclesiological understanding, which approaches that are unable thoroughly to include practical voices cannot” (180). To use an image employed by McGrath, understanding the church apart from the particularities of “place” in which its identity is embodied and operationalized would be like trying to describe a wine apart from the particular terroir—the soil, climate, type of grape, or viticultural conventions—from which its distinctive taste and identity emerge.

Two essays in the second half of the volume are especially worth mentioning due to the more radical nature of their proposals and their conspicuous contrast with one another (though the authors might not see themselves as in opposition to one another). In an earlier book, Nicholas Healy had already argued against what he calls “blue-print ecclesiologies” and on behalf of an “ecclesiological ethnography” that would provide a method for aiding theologians in overcoming their tendency to misidentify the distinctiveness of the church by locating it on some idealistic plane, disconnected from what the church actually is and does.1Healy revisits his argument in this volume and attempts to identify the church’s distinctiveness in an empirically grounded attempt to be truer to the inconsistency, diversity, sinfulness, and confusion in the church. In contrast to those who begin with the church’s otherness in relation to the world, for Healy the church’s empirical distinctiveness is limited since its actual practices are so thoroughly determined by the resources of the world’s cultures and societies. The church is very much a part of the world, even if may be spoken of as “the world’s Christian expression.” Though the church has a theological distinctiveness based on its calling by God, that distinctiveness is not visible empirically, especially since the church points away from itself to the gospel of Jesus Christ. For Healy, “the church cannot display its special relation to God in, say, a shared set of distinctive practices or beliefs, or in some depth dimension of its essence. The church is theologically distinctive because of God’s call, not because of its response to that call” (198).

Immediately following Healy’s essay (and perhaps placed strategically there by the editor) is an essay by John Webster, who offers a robust argument against what he calls a “naturalized ecclesiology” that interrupts or overtakes the theologically prior investigation into the work of God in electing, gathering, and sanctifying the church as a society that is “moved by God” before it can be spoken of as a society that moves itself or is moved by the world. Webster distinguishes two sorts of ecclesiological investigations—the aforementioned theologically prior inquiries (which is the task of dogmatics) and investigation into the phenomena of the church, where ethnographic research methods become helpful. Though Webster is indifferent to which comes first temporally “in the order of knowing,” he argues for a hierarchical ordering of the two types of investigation so that answers to the second investigation are not taken to be answers to the first. Because of this ordering, Webster is willing to say much more about the church “not merely as a kind of association of those undergoing spiritual transformation, but as a society whose public forms of life instantiate and promote the discipline in which creatures may come alive” (220).

This volume is both a conversation gatherer and a conversation starter. It is also a conversation changer. After a century in which Western thought has become deeply aware of how closely intertwined and inseparable content and form, essence and embodiment, are, this volume—and presumably future volumes to come in the series—represents a timely and significant challenge to the disciplines of theology and ethics to incorporate an integration of the theoretical and empirical in its methods, conversations, and judgments.

By Bryan Stone
Bryan Stone is the E. Stanley Jones Professor of Evangelism, Co-Director of the Center for Practical Theology, and and Associate Dean of Academic Affairs at Boston University School of Theology.