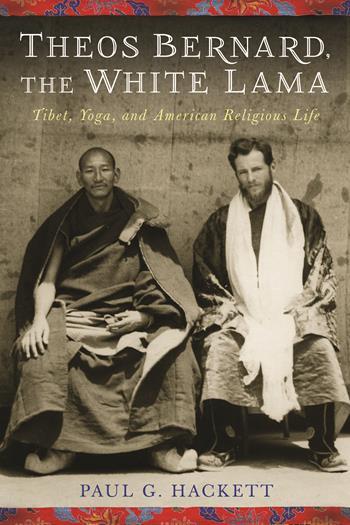 Cresting a long and steep incline rising from the mammoth Kali Gandaki river, we saw Lubrak emerging in the distance. This tiny village, a central stronghold of ancient Bon religion, promised trekkers like us entrance into the uncharted mysteries of a precursor tradition to Tibetan Buddhism. At this edge of Mustang, an ancient Buddhist kingdom in Nepal, we hoped—somehow—to access hidden mysteries of ordinary and extraordinary perception. Paul Hackett, with a Ph.D. in Tibetan Language and Cultures, invites us on a similar human journey, searching for access to ancient sources of wisdom. Through his scholarly competence, Hackett blends history, texts, and cultures as an interpretive frame revealing new angles on Americans’ longstanding bent toward esoteric knowledges from “The East,” specifically India and Tibet. Within this frame, he tells an engrossing story of Theos Bernard’s life, an extraordinary character on this human search for wisdom or spiritual—and in his case, celebrity—breakthrough. Clarifying the ins and outs of complex global markets of “East meets West” religion, politics, and personalities, Hackett crafts a “must read” book.

So, who was Theos Bernard? The short answer is a young adventurer, trained in comparative religion at Columbia University in New York, who made his way to Lhasa, Tibet and spent time with tantric lamas and yogis. Bernard’s father drew a path of invitation for Bernard by chucking his traditional life in Arizona and training in India with yoga masters. Interested to learn more, Bernard east went to Nyack, New York where a wealthy enclave of spiritual seekers regularly met and studied with his uncle. Here swarmed American fascinations with lessons in Indian philosophy, American Theosophy, Spiritualism, and other versions of esoteric texts and practices, including yoga. Here Bernard thrived and met his future wife, Viola.  Pursuing his studies through a master’s degree at Columbia University in Anthropology and Comparative Religion, he spent a summer in 1935 working for the Bureau of Indian Affairs at the Taos Pueblo. Here, he felt, he could grow his ethnographic skills, though he had little success getting the Indians to divulge their mystical secrets. What he did hone was his photographic skills.  Readers immensely benefit from Hackett’s and Columbia University Press’ decision to include so many magnificent photos from Bernard’s travels. Returning to Columbia, he finished his master’s thesis on the current state of Indian Tantric Ritual Studies and began making plans to get to India himself and study. But these goals only served as stepping stones to his ultimate plan, training in Tibet.

What Did Bernard Claim

Degree in hand, Bernard initiated his plan for claiming direct knowledge of Eastern spiritualities, specifically the tantric traditions of Yoga and Tibetan Buddhism. Leaning on family acquaintances, he and Viola arrived in India, connected with his father, and journeyed from one yogi and/or sanskritist to another. Most interested in collecting texts, learning Tibetan, and being initiated into tantric practices, Bernard always held the goal of personally bringing this esoteric wisdom back to the United States. In Hackett’s skillful hands, these adventures also reveal internal competitions between various yoga and translation schools. What could simply stand as an amazing life story becomes a window for intellectual insights into cultures, religions, and geographies. With deep knowledge of the place and era, Hackett draws Bernard’s trail in the late 1930’s to highlight the boiling pot of intrigue, scholarship, missionizing, and politics that was Tibet. His scholarly range helps readers understand the emerging and global race for Tibet as strategic territory for political officials, religious groups, academics, and adventurers from Britain, India, China, France, the Netherlands, Germany, more, and Tibet itself.

In these pages we meet such amazing characters as the Dutch Tibetologist Johan van Manen, who also served as the president of the Royal Asiatic Society of Bengal. Encouraging Bernard to do as he did, carefully translating single Tibetan texts to “explore the subtleties of Buddhist philosophy through the lens of one person’s life,” van Manen recommends following the path of Walter Evans-Wentz in his study of Milarepa (109). Drawn into the then world of scholarly pursuit of esoteric texts, Hackett better contrasts Bernard’s main concerns. His claims deferred deep textual study. Bernard wanted to find contemporary Milarepas and receive direct teachings from them. He wanted to become a lama, initiated into the teachings studied by Milarepa and his lineage. He would get to Tibet.

He wanted to claim himself as the “White Lama,” the first white man ever initiated into the jeweled tantric lineages of Tibet. But in fact, Bernard’s self-designed accolade drew more from his version of the pan-human desire for a calm mind and joy than it did from deep knowledge and experience of Tibetan tantric traditions. In fact, he found their rituals and practices somewhat primitive and silly. He would draw on aspects of their wisdom to develop his own version of spiritual interiority through mind-awareness, meditation, and insight, and he describes one emergent moment of such insight in his early travels (189). But Hackett’s deft style confirms that Bernard was not solely or simply a grasping charlatan. A plan in mind, yes, but also on spiritual quest, Bernard stretched himself in order to participate in the very lineages of enlightenment known to Milarepa and now taught to Bernard by a Kagyu yogi hermit. Hackett quotes from Bernard’s writing to reveal his mixed intentions during this initiation:

The entire process took virtually all of the afternoon, but now I am prepared to go to work before the last step of ascending into heaven or something—however I appreciated the opportunity and that I was able to instill enough confidence on virtually a glance to gain this entrance which has never been done before by one from my country (259).

Eventually returning to the United States, Bernard spreads his dream of “…universal truths of life in light of modern understanding…[led by] a great leader…point[ing] the direction for the inner way of life…”(254) Resisting unnecessary Tibetan ritual, he also understood the human draw to such pomp and so wore full Tibetan garb with sacred scarf when on the lecture circuit to large audiences of American religious seekers and adventurers. Hackett again frames Bernard’s life in a broader context (256). He explains that as Aimee McPherson continually aired her sermons on her Los Angeles radio station, so too Bernard, who, marketed by the National Lecture Bureau, explained his versions of Tibetan and yoga traditions, a human revolution of truth, across the radio waves (290). Eventually settling in New York City, Theos taught yoga, specifically in forms designed for increased sexual and general energizing power. In 1943, he was awarded a Ph.D. by Columbia University for his dissertation entitled, “Hatha Yoga: The Report of A Personal Experience.”

How Did Bernard Make These Claims

Much of this book details the ‘how’ of Bernard’s claims to be the first “White Lama.” Certainly, his personal vision and determination played a significant role. But equally significant were the people of influence, particularly wealthy women, who entered his life. Viola, his first wife and from the letters in this book, his true love, funded much of his initial travel, training, and massive accumulation of texts and artifacts. Initially going with him, she settled in New York to pursue her medical training and became the founder of the Children’s Psychiatric Program at Columbia Presbyterian Hospital from which she retired in 1980. A second wife, who also divorced him, Ganna Walska, funded a never-realized spiritual training center in California that Bernard and his father hoped to co-lead. She also paid for the transport of innumerable cases of art, texts, and other artifacts to that location.

Of course, everything about his claims depended on the Tibetans he met. His loyal companion and guide, Tharchin Babu, trekked with him across Tibetan and Indian landscapes and to monasteries. A Tibetan teacher working in India for Scottish missionaries, he played key roles in helping Bernard navigate Indian, British, and Tibetan border-controlling authorities. Once in Lhasa, Bernard was embraced by powerful aristocratic families and monastic lineages. The historically famous Lord Tsaron Dasang Dramdul, a military and governmental hero, personally protected Bernard and introduced him to many high level dignitaries and monks. He also gave Bernard copies of his most valuable Tibetan texts, hand-written or printed by hand-carved blocks. Along the way, various adventurers, explorers, government dignitaries, and religious and language teachers provided tutelage and support.

But it is Paul Hackett that reveals the process best through his indefatigable research of archives, artifacts, texts (journals, letters, business communications), and innumerable photographs. The wealth of research informing this book provides one of the fullest version yet of “East-West” religious intrigue, exchange, and spiritual longing. Along with the treasure trove of data, Hackett integrates his own knowledge and training, unraveling complexities of Tibetan religious and political history in an epoch-turning era by weaving the past histories of Tibet with early 20th century dynamics and today’s control of Tibet by the Chinese. American religious romanticism with all things from the East and specifically Tibet comes alive as never before, including tales of the C.I.A., the Chinese invasion and escape of the Dalai Lama, and Muslim and Hindu conflict emerging from British colonial rule. Using Bernard’s life and mysterious death as a central point, this vast constellation of factors coheres to readers’ scholarly and historical benefit.

The final mystery, Bernard’s death, shapes the final section of the book as Hackett literally journeys the trails of Bernard to the Kulu Valley. Having tried again to enter Tibet, Bernard disappears. Hackett arrives in the area from Lhasa where he painfully witnessed the traumatic effects on Tibetan culture and religion by Chinese occupation. Spending the night, as Bernard had, on the northern edges of Kulu in the Ki Monastery, Hackett discovers no additional information to what he had already unearthed. Bernard’s and his guide’s deaths seemed the result of a misidentification during a period of Hindu-Muslim violence in the area. Hackett’s postscript here is poignant and personal, weaving his thorough intellectual knowledge with his Tibetan teachers’ trainings and his own story.

Paul Hackett invites us to take the journey of Bernard’s amazing story, to perhaps glimpse something beyond perception, direct access to mystery. Thanks to Hackett, we see much more than we did before. Definitely, a “must read” book.

By Bobbi Patterson
Bobbi Patterson is Professor of Pedagogy and Co-Chair of the Graduate Division of Religion at Emory University.