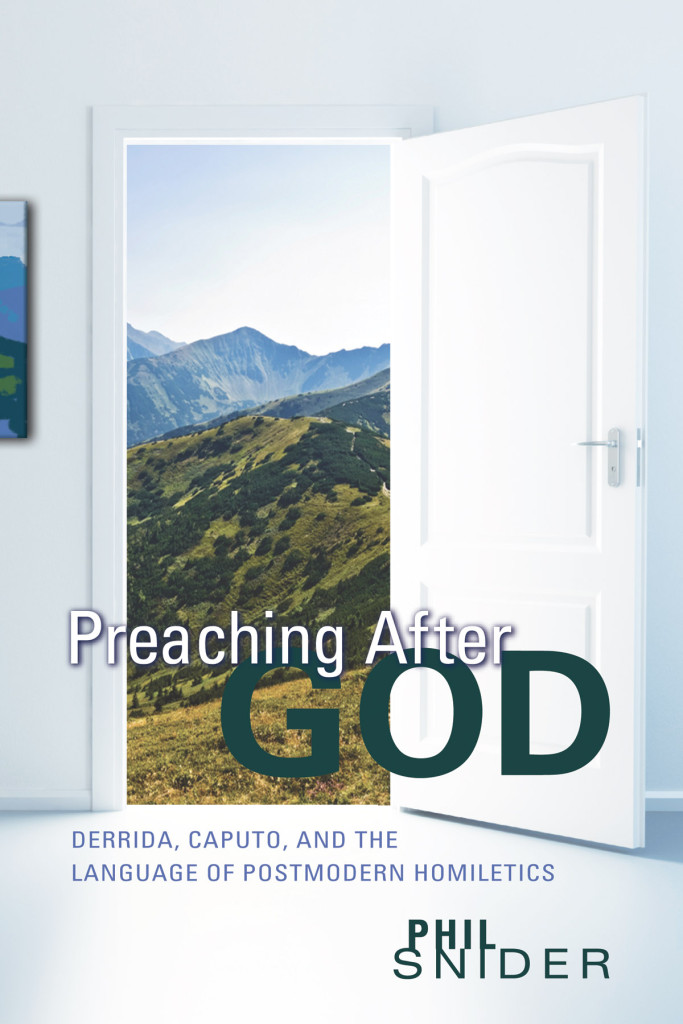 Preaching After God begins with a true story about a roomful of Christian preachers who cannot come up with a concrete instance of God’s action in their lives. For Phil Snider, this inability to talk about the action of God in preaching has had negative implications for the progressive congregations with which he identifies. Snider makes abundantly clear that he has no interest in superstitious beliefs that image God as a supernatural “Santa Claus” or even a “Supreme Being” (75, 2). His congregation welcomes those who, by his own description, “believe in God some of the time, or none of the time, or all of the time” (2). In Snider’s view, however, progressives that depend entirely on human agency as the transformative element of their sermons share something in common with their conservative counterparts. Both domesticate transcendence, creating a God that either conforms to human ontology or disappears into human action. To avoid this catch-22, Snider draws on the philosophy of Jacques Derrida and John Caputo, arguing for a “homiletic of the event” in which God insists rather than exists. Snider’s hope is that such a homiletic maintains the significance of the “wholly other” (31) for preaching and opens a door to transformation and celebration.

Snider begins his argument by noting the pastoral significance of the “modern homiletical crisis” (32) that has resulted from the eclipse of divine agency in progressive preaching. He describes a lost sense of “wonder, love and praise” in progressive sermons and a corresponding compassion fatigue in congregations (46). He stresses the danger of inauthenticity when these congregations lose the connection between what they believe and how they behave. Furthermore, he notes that such preaching can become idolatrous, making “it far too easy to place God in one’s back pocket” (41).

Snider’s antidote lies in the “religious turn” of Jacques Derrida’s philosophy, leaning heavily on John Caputo’s rearticulation. Snider takes pains to describe how Derrida has been misunderstood by his ecclesially-minded critics and earnestly outlines Derrida’s “love of the impossible”(82). Snider defines deconstruction as a commitment to the impossible event contained in a name – an event that breaks open the name and calls to the reader. The event is not the name itself, but the evocation of meaning contained in the name. It is this meaning that overflows the name and deconstructs it, even as it depends upon it. Significantly, Snider reframes the agency of the reader in the deconstructive event. The reader doesn’t “deconstruct texts; rather texts deconstruct themselves, precisely because of the event that they harbor, [an event] that can’t be contained in words” (144). Snider appropriates this concept of “event” as a post-modern conception of God that moves beyond “magical” thinking, as well as modern, moralistic reductions (30). Because it lets go of the need to know the Source of the event (i.e. God does not exist, God insists), Snider argues that such a conception can be embraced by postmodern thinkers whether they believe in God or not. And yet, such a focus on the instability and impossibility of the “event” leads the listener to faith, hope and a longing akin to love.

Snider’s articulation of this hope is beautiful, but he falters in his description of the particular character and power of events that insist. In short, there is something magical – or at least self-authenticating – in his description. Not all events are benign, and not all longings are equal. Some events rise from neuroses, some from desires for power or consumerist fantasies. Finally, while “the Source” cannot serve as a firm foundation or guarantor of knowledge, it cannot be done away with either. As Paul Ricoeur argues, while the questions of “what” and “why” are significant for understanding eventful action in the world, as well as the acting Self, they cannot replace the question of “who.”[1] The “who” behind the event matters, even as our understanding of that “who” cannot be separated from the indeterminacy of lived experience.

In this regard, Snider’s inattention to the particularity of the acting subject (i.e. the “Source”) mirrors his inattention to the particularity of those who are impacted by the deconstructive event. The “event” of longing – embedded in and deconstructive of language – has a univocal and universal tenor in Snider’s description. There is little acknowledgement that events occur in concrete contexts, inseparable from the persons who participate in them. Derrida’s classic discussion on democracy and the longing it evokes serves as an example. This longing is contextually grounded. “Democracy” reads differently in countries where democracy has become a code word for the interests of globalization and the manipulations of capitalism. To speak of undefined, universal longings for a messianic age, or to assume that all in the congregation will share an “event” that transforms the world in a positive way simply because it happens, arguably takes more faith than the traditional views Snider critiques. Such claims would have been aided by a greater diversity of voices in Snider’s engagement with Derrida’s work. The few theorists of color mentioned by Snider, for example, were addressed in footnotes.

Snider’s belief that postmodern theory is no enemy of Christian faith is a useful contribution to the homiletic conversation, and his invitation to reexamine Derrida’s philosophic contributions for the benefit of practical theology is welcome. There is an iconoclasm and a “passion for the truth” that resonates in both (163). As Snider points out, both call for a cruciform death to certainty and proof. I also appreciate his performative emphasis on “how a word or symbol means” rather than “what a word or symbol means,” (145) moving theology into conversation with lived practice. But I find it strange that the “materialist homiletic” (30) he describes for Christian preaching includes so little talk of the embodied Jesus.

To collapse the noun of “God” into the insistence of a call is one thing. To dissolve the body of Christ into an event of unfulfilled longing (i.e. dissolving the person of Christ into his work) is something different. For all of Snider’s disclaimers, this is high Christology indeed. There is a familiar neo-Platonism in Snider’s assertion of indestructible essences “in the nutshell” of names (83). The problem of Jesus’s body – its presence and its absence – is a thorny dilemma for any ecclesiology or sacramentology. (And finally, Snider is claiming that preaching has a sacramental function.) Given this function, doing away with the particularity and ambiguity of Jesus’ body too quickly risks making, in Snider’s words, the “wholly other” wholly the same. Snider notes that there are more nuanced versions of theism than the magical versions he denounces, but he does not engage them. I wondered what he would think of Douglass Farrow’s work on the relation of presence, absence, and time[2] or Sarah Coakley’s excellent article on the “elusive” body of Jesus.[3] How would he respond to J. Kameron Carter’s assertion of the “articulation” of Christ’s flesh and the “reconfigured…self” that occurs in the preaching?[4] Each of these discussions affirms the significance of faith for theology and argue against domesticating of the divine. None of them attempts to “secure the grounds of knowledge” (156) or isolate doctrinal claims from the provisional eventfulness of practice. They do this, however, by paying attention to the particularity and grit of bodies moving in lived relation, rather than placing faith in disembodied, universal longings. After all, Christian tradition affirms that God became a provisional, misunderstood, material person, not an indestructible event. The deconstructability of Jesus – both his name and the event harbored in that name – is part of his scandal and, in my view, part of his kenotic witness.

What I appreciated most about Snider’s work are the sermonic offerings at the book’s end. It is a risky, vulnerable thing to put one’s theories into practice, and Snider’s sermons are written with love and contextual urgency. Snider’s sermons, however, also assume the transformative action of a particular person that is recognizable. This is true even when the sermons refrain from naming “God,” as is the case in one sermon preached at a university baccalaureate service. They are sermons that take place “in the shadow of the cross, with the spilled blood and broken body just a few steps away” (164), and, as such, they risk more than the homiletic theology Snider describes.

[1] Paul Ricoeur, Oneself as Another, trans. Kathleen Blamey (Chicago: University of Chicago Press, 1992), 59.

[3] Sarah Coakley, “The Identity of the Risen Jesus: Finding Jesus Christ in the Poor” in Seeking the Identity of Jesus: A Pilgrimage, eds. Beverly Gaventa and Richard Hays (Grand Rapids: Wm. B. Eerdmans, 2008), 308.