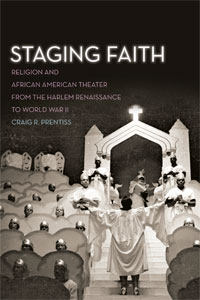 Craig R. Prentiss offers a refreshing text exploring the intersection of religion and artistic production in African American culture. Operating under the premise that, at some level, one can understand stage plays as “arguments for what the world is or what the world should be,” Prentiss examines how black playwrights grappled with the fraught relationship of religion and black identity (5-6). His core argument is that these artists utilized the stage as a site for “combat[ting] the idea that an instinctively emotional, superstitious, otherworldly, irrational, and blindly faithful form of religious life was endemic to black character” (6). This creative work operated against a backdrop of religion’s dual roles in 1) framing the negotiation of black humanity and 2) complicating visions of black racial uplift.

Prentiss offers his argument in five chapters. Chapter 1 directs attention to the rapidly shifting class dynamics brought about by the Great Migration. The confluence of class relations, broader theatrical developments, and changing attitudes within African American religious culture produced a fertile creative ground. African American playwrights “located an ‘authentic’ expression of black life in America” in the very theological and liturgical practices that complicated their hopes for racial advancement (37). Chapter 2 focuses on the growing influence of humanism in black theater, which prompted playwrights to critique false morality and hypocrisy within institutional Christianity. Here, Prentiss examines a set of plays that both challenged the church’s social and spiritual impact (or lack thereof) on African American lives and reflected larger ideological trends among black intellectuals and artists of the era. Chapter 3 deals with the specter of lynching and how black playwrights, influenced by humanism, wrestled with lynching through stage plays. Prentiss categorizes these plays within four themes: 1) refusal of motherhood, 2) exposing the church, 3) awakening human agency, and 4) futility of prayer (75). He sees these plays as antecedents to “protest theodicy,” an approach that “provides no answers but cries out in the face of perceived evil” (107). Chapter 4 illuminates the artistic response to superstitious elements of religious practice. What emerges is a nuanced portrait of how playwrights often held religious belief in tension with allegiances to rational thought and higher education. The concept of noblesse oblige was a powerful influence on the educational uplift embedded in such plays. Chapter 5 concerns itself with the positive deployment of Christian imagery and faith through stage plays in order “to assert the dignity and full humanity of Africans and the African diaspora” (148). Approaches to this practice varied from overtly evangelistic plays to dramatic re-imaginations of Biblical stories. All together, such plays took advantage of the usefulness of religious trappings as a medium for narrative communication.

As a whole, Prentiss does a strong job of culling from a large body of theatrical work in order to focus on significant trends in black religious thought and artistic production. He successfully demonstrates the depth and breadth of dramaturgical resistance to simplistic notions of black religious culture. For the sake of brevity, he understandably leaves out a number of plays available for analysis. It would be intriguing to know more about his particular process for selecting or forsaking certain plays. Additionally, though he underscores the creative intentions of the playwrights, it is worth considering audience reception of the work. Prentiss offers textual analysis of the scripts (some of which were unpublished), but it is through performance that we see the manifestation of a play’s artistic vision. An analysis of staged performances might yield different evidence for the expression of the playwrights’ perspectives on black religious life and identity. The degree to which these dramatic productions contributed to significant change in the personal or communal religious and social practices in African American communities is not clear, and perhaps such an inquiry lies outside the scope of this work.

Nonetheless, Prentiss contributes a vital work on a rich area of African American artistic culture. As a literal and figurative stage for black identity, the theater in the era from the Harlem Renaissance to World War II was a powerful force. Prentiss brings a careful eye and robust discussion to works that were not only labors of artistic love, but also platforms for social change. He sets groundwork for the continued investigation of African American theater as a vehicle through which possibilities for black spiritual, political, and social life expanded in great measure.

By Kyle Brooks
Kyle Brooks is a doctoral student at Vanderbilt University.