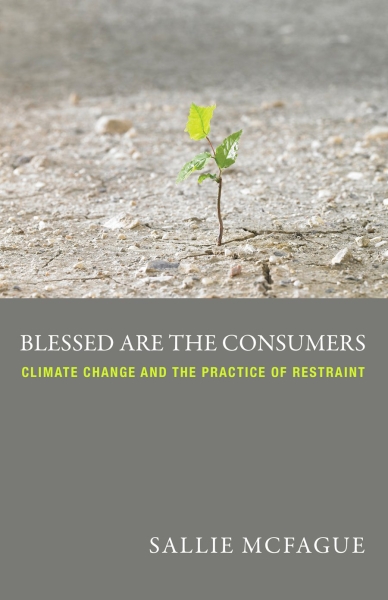 In Blessed Are the Consumers, Sallie McFague takes up the challenge that the “twin planetary crisis of climate change and unjust financial distribution” issues to world religions: to “present a radical alternative to the good life for both people and the planet” (xi). McFague finds that radical alternative in an expansive understanding of the Christian concept of kenosis, or self-emptying. Her stated goal is not to provide new information about the crisis that we face today, but rather to help move people “from belief to action, from denial to profound change at both personal and public levels” (xii). In order to do so, she explores religious concepts of conversion and kenosis, scientific discourse regarding evolution and the interdependence of all existent things, and the exchange of energy in the ecosystem through the stories of the lives of three countercultural saints who show the way to a life well-lived.

McFague’s intended audience consists of the people whom she argues are being called to empty themselves so that others may live: upper- and middle-class citizens of Western industrialized nations. While she argues that many, if not all, of the world religions have concepts similar to kenosis, her analysis focuses mainly on what Christianity has to contribute towards providing and maintaining an alternative to our consumption-driven, market model of understanding reality. McFague’s argument is anything but obscurely academic: she writes primarily to the lay Christians of the United States. Rather than start from any specific Christian doctrine, she begins her argument with the claim that today’s widespread interest in personal narratives (as seen in such phenomena as reality TV and internet blogs) stems from the fact that personal narrative is concerned with the issue of “how to live well” (1). Recognizing the power of the personal narratives, McFague offers the lives of three modern saints—John Woolman, Simone Weil, and Dorothy Day—to illustrate how these three people found fulfillment in self-emptying. In her analysis of their life stories, McFague draws out four characteristics that they shared, and that she argues are also applicable to our lives in the face of climate change and unjust financial distribution. These include the maintenance of a “wild space” through the practice of voluntary poverty, the development of the ability to pay attention to others (particularly their physical needs), the development of a “universal self” that includes all of creation, and the recognition that the kenotic worldview that emerges from this understanding of the self is relevant to both public and personal actions.

McFague describes the difference between the practice of voluntary poverty and absolute poverty, or destitution. While those in absolute poverty lack some of the basic necessities of life, those who practice voluntary poverty choose to eliminate those things that go beyond basic necessities in order to focus on the needs of others (86). Voluntary poverty creates “wild space” in the lives of the saints, which McFague describes as “the peculiar insight into alternative ways of living that some people seem to have” (46). In the lives the saints, voluntary poverty served as a way of sharpening one’s vision of the suffering other for Woolman, a means of living in solidarity with the oppressed for Weil, and something necessitated by love of the neighbor for Day. McFague cites their practice of voluntary poverty as “a step that opens a person to think outside of the controlling model of our culture…to attentiveness to the basic needs of the universal self” (81). She further defines this universal self as “the self that includes all others and says, ‘The world is my body’” (81). Such an alternate perspective on the world and one’s relation to it mandates certain behavior, both towards and on behalf of others (who are now seen as part of ‘my body,’ part of the universal self). This leads to the saints’ actions, both public and private, on behalf of those suffering from injustices—actions that include the practice of voluntary poverty.

These personal narratives challenge McFague and the reader in often uncomfortable ways. Because she hopes to move her readers to a new worldview and new actions that match it, McFague is concerned with the problem of moral paralysis, the seeming inability or unwillingness to take action even when faced with the worsening crises of climate change and gross economic disparity. Acknowledging that Woolman, Weil, and Day are so counter-cultural, their lives so extreme, that their radical example might actually contribute to moral paralysis, McFague makes it clear at several points in the book that she neither emulates their lives herself nor expects the reader to do so. Rather, she characterizes them as “paradigmatic but not programmatic” (174). For example, McFague notes that for Woolman, Weil, and Day voluntary poverty really meant renouncing their wealth and privileges and living in solidarity with the poor and oppressed. When it comes to contemporary application, however, McFague assures the reader that voluntary poverty “need not and should not mean the same thing in all times and places.” She urges upper- and middle-class people today to reduce their energy use and to use their skills, expertise, and prestige to influence legislation and otherwise alter the systems in which we live (76-77). In trying to make the lives of these radical saints more palatable to her intended audience, McFague interprets their practice of voluntary poverty metaphorically, noting that “Voluntary poverty for us means giving up our exceptionalism, our status, our separation from those who will suffer the most from climate change” (87).

This book offers the readers an expansion of McFague’s model of the world as God’s body in her discussion of the universal self: as human beings made in the divine image, the world is now our body as well. It also provides an interesting entry-point into the theological issues relevant to our relationship to climate change and unjust economic distribution through the personal narratives of saints’ lives. My greatest criticism is that, in a book that examines actual lived-out responses to injustice, and that identifies the practice of voluntary poverty as the sine qua non of these saints’ lives, the prophetic call of the saints’ lives is watered down to a metaphorical call to change our hearts, in the hopes that our behavior might follow. McFague’s narration of the stories of Woolman, Weil, and Day demonstrates that, at least for them, changed hearts and changed behavior were inseparable. When McFague separates her argument for the model of the universal self from the practice of voluntary poverty, she parts ways with the very saints she has lifted up as paradigms. But then, her argument is not that religions or these saints in particular have the answers to today’s crises. Rather, their contribution lies in keeping alive the possibility that there is an alternative to the destructive path we are on, one in which we pay attention to others, and restrain our own greed that others might live.

Cite this article as: Rebecca Copeland. "Blessed Are The Consumers: Climate Change and The Practice of Restraint." Practical Matters Journal (October 1, 2014). http://practicalmattersjournal.org/?p=392.