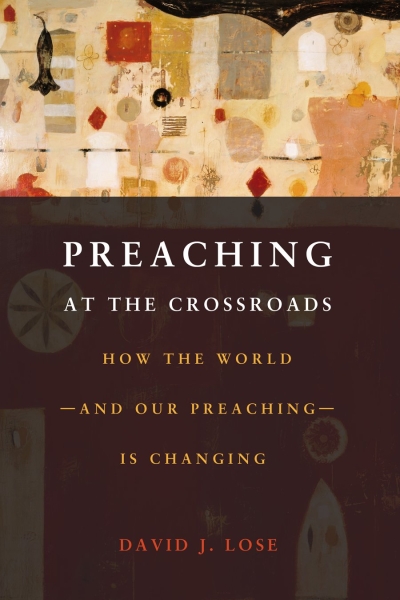 The sense that preaching is in crisis has long shaped the homiletician’s work. The promise of refined technique has been the frequent response. This dynamic has resulted in what David Lose describes as an almost endless “catalogue of diagnosed problems and prescribed solutions” (3). In Preaching at the Crossroads, Lose suggests that this literature and the remedy-resistant crisis inciting it are more than the hiccups of minor adjustments. Rather this catalogue and its failures are the spasms of an emerging new age and preaching’s uneasy entry into it.

Preaching at the Crossroads is a solicitous response to the preacher’s lament that preaching is “broken.” Lose begins by reshaping the problem-solution pattern embedded in this plea into a mystery-possibility paradigm. A jaundiced reader will protest that this move is mere wordplay—a smart nominalism that evades the real trouble in which preaching finds itself—and that Lose has added another volume to the catalogue of failed solutions. Such a narrow reading would miss that Lose is presenting the shift from “problem” to “mystery” as preparation for multiple possible directions rather than the prelude to an updated method. Aided by Paul Tillich’s approach theology in the modern era, Lose crafts an invitation for readers “to suspend past assumptions and judgments in order to be surprised by what manifests itself in this new context and world” (5).

This invitation presents preaching with a choice between further refinements of techniques or a more wholesale revision of its fundamental assumptions. This choice is organized into three sections addressing the trends that have emerged after modernity’s collapse: postmodernism, secularism, and pluralism. From these trends Lose draws out a central question which in turn is examined across the space of two chapters. It is a clear structure that makes the book readable as a single, sustained effort and increases its appeal to the working preacher whose study is compressed into limited, discrete blocks of time. Lose intends the book to be “a straightforward analysis of the age in which we live” so that preachers can begin to “embrace the mystery of our age” and deliver sermons that are “as fitting to our culture as they faithful to the gospel” (9). The chapter divisions and subsections give an otherwise slim volume the space necessary to realizing the author’s stated intention.

Lose turns first to postmodernism’s withering skepticism in search of latent expressions of faith. Before preachers can even begin to devise ways of making the truth compelling to their hearers postmodernism confronts them with “a more general attitude of unrelenting skepticism pervading a number of disciplines concerning the validity of previously held assumptions about the nature, and even existence, of objective truth” (17). For preachers navigating postmodernism’s choppy waters entails setting a course away from “self-evident” truth and towards more generous notions of trust and trustworthiness. Lose admits that this kind of truth “may appear a little more ragged and frayed at the edges than the idea of truth that prevailed in the modern age,” but he also urges preachers to see in this development an expanded opportunity for forms of confession and witness.

The second section brings secularism and the eroding sense of transcendence it brings in its train. Preachers must interpret a culture characterized by a waning sense of transcendence, a situation constrains expressions of hope even as these are desperately needed. One of the distinct strengths of Preaching at the Crossroads is the prose itself. Lose often crafts his arguments by stitching together texts drawn from disparate sources—the clever pastiche characteristic of artful sermons. The section that opens the book’s third chapter, “Preaching Hope in the Secular Age,” is a particularly excellent example of this style. This like the other chapters in the book are composed with the easy complexity of a manuscript from a memorable sermon or class lecture. Lose opens the chapter with a quote from the President Snow character in the book/film franchise The Hunger Games: “A little hope is effective; a lot of hope is dangerous” (49). Lose transitions from this literary fragment into Harvey Cox’sThe Secular City, observing that “secularism represents a loss of confidence not in human things but divine” (49). Charles Taylor’s  A Secular Age resources a comment on “the triumph of the immanent over the transcendent” in secularism. This trajectory allows Lose to show (rather than tell) that “secularism is a condition in which both the religious and non-religious find themselves struggling for hope” (50). With the challenge before contemporary preachers illustrated in text and commentary, Lose detects the gospel’s difficult promise in this difficult context: “Christianity becomes relevant that is, precisely, as it responds to the secular crisis of hope” (53).

The final section of the book is an examination of pluralism and the attenuated distinctiveness of Christian identity experienced under those pressures. The first of the two chapters deals with “digital pluralism,” a situation supersaturated with options for identity creation and truth claims. In this sea of narratives and meaning-making systems, Christian preaching is muted, an indistinct voice among more distinct others.  Amid such pressures preachers must shift preaching’s emphasis on declarative and propositional forms to a style that begins with questions and deploys the biblical narrative as a primary resource for identity construction. Preaching that cuts through the din of digital pluralism requires careful listening for the unsaid implications of what those on the church’s margins are saying that they need. This practice of listening is always a response to this question: “What would our church look like if it were the place where people are told they have infinite worth and are invited to join a community of persons devoted to discovering and sharing lives of meaning and purpose?” (95). The means by which preachers can cultivate this practice arrives in the book’s most technique-oriented chapter, “Preaching and Christian Identity.” The suggestions are both practical and realizable ways of enhancing the hearer’s participation in sermon construction. There is some risk here of so flattening of the difference between preacher and hearer that the goal of “equipping our hearers to be competent, even fluent interpreters of the Christian faith,” is obscured but the reward—a thriving Church—more than justifies the risk (107).

Preaching at the Crossroads is instructive for student and working preachers alike. For the preacher confronted by the weekly spectacle of empty pews visible from the pulpit and the indifferent reception of carefully prepared sermons, this book is a clear exposition of the causes behind these discouraging signs. For the student learning to preach, it is a volume that displays one preacher’s way of reading the postmodern landscape, with the footnotes presenting themselves as an itinerary to structure a transition from seminary classroom to the pulpit. While the claims of an entirely new era seem exaggerated—the product of clear observation clouded with a bias overstating cultural developments that have occurred during the author’s lifetime—the usefulness of the volume is tied more to the imagination it enables to the reader to acquire rather than the historical narrative it constructs.  InPreaching at the Crossroads, Lose presents a case for preachers to embrace the intractable complexity of their context and to find in that embrace a source of hope and urgency.

Cite this article as: Benjamin Anthony. "Preaching at the Crossroads: How the World—and Our Preaching—Is Changing." Practical Matters Journal (March 1, 2015). http://practicalmattersjournal.org/?p=337.