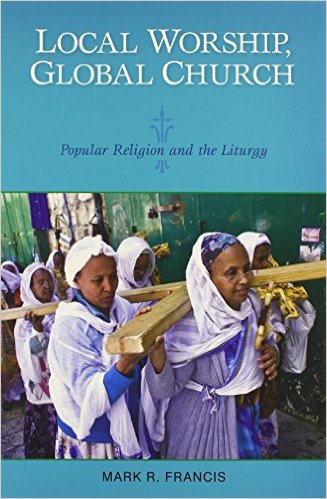 In this compact volume, Mark Francis adds a historical perspective to the ongoing conversation around matters of inculturation and liturgical praxis.  As a Roman Catholic liturgical scholar, Francis focuses particularly on the relationships between local practices of piety and the catholicity of the Mass, and between popular understandings of sacramental theology and the teachings of the Magisterium.  As he writes in the introduction,

What would the history of worship look like if we paid more attention to the experience of the “people in the pews” – viewing the liturgy through what we know about their popular piety? This perspective is an undeniable complement to the more official picture presented in the Church’s own pronouncements in the liturgy (5).

This added perspective is necessary, he contends, not only due to the demographic shift of Christianity away from Europe and North America towards the Global South, but also because of the transition in the papacy from Benedict XVI to Francis.

Francis deploys a threefold typology in his account of liturgical history. The first, official, meaning of the liturgy is that which is “explained and contained in liturgical books” and “described in ritual introductions (praenotanda) such as the General Instruction of the Roman Missal,” as well as in the “documents issued by the magisterium to explain the objective meaning of the liturgy” (8). The public meaning, on the other hand, is “that which is commonly understood by the people gathered.”  The third, or personal, meaning, is grounded in each individual’s “particular history of interaction with the liturgical symbols connected with his or her own particular experience” (10). In this text, he concentrates on the development of the public and personal levels of liturgical comprehension and the possible points of tension with the official level of Church teaching.

Having set out this interpretative framework, Francis traces a historical trajectory  that ranges from the Apostolic age to the aftermath of Vatican II.  Subsequent chapters focus particularly on the Greco-Roman world, the origins of the Roman Rite, what he describes as the “Germanization of Christianity,” the spread of Catholicism to the Americas, and the legacy of the Council of Trent (ix). In each historical period, Francis describes the public and personal reception of the liturgy, paying particular attention to how those levels of reception might broaden or even complicate the teaching of the Church.

As a priest in the Episcopal Church, I have no personal investment in the controversy with which Francis seems to be most concerned: the nostalgic reification of the Tridentine Latin form of the Eucharistic liturgy into the pure form of Catholic Eucharistic worship, from which all other forms are considered to be derogations.  Insofar as he argues that all forms of liturgy are inculturated, and that there has never been an idealized “golden age” of liturgical praxis and theological understanding, Francis is, of course, correct.  However, he also seems to overcorrect into contentious theological territory. At one point, for example, he seems to argue for a memorialist understanding of the Eucharist based on Western liturgical practice prior to the early Middle Ages (99). At another, his argument on the “Germanization of Christianity” depends on an at times essentialist understanding of “the Germanic imagination” (91). While it may indeed be helpful to consider local practices in addition to magisterial teaching, it is less helpful to do so by invoking a national, cultural imaginary.

That being said, Local Worship, Global Church is a helpful contribution to the ongoing work of Catholic liturgical scholarship in the wake of Vatican II.  It is written in an accessible style that would make it an intriguing choice for adult formation in Catholic parishes as well as for undergraduate teaching purposes.