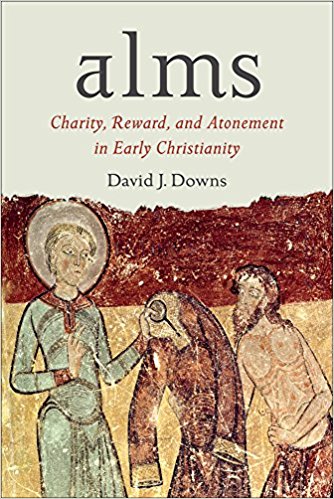 The idea of atoning or redemptive almsgiving is that the act of giving alms or doing work for charity merits the forgiveness of sins. Most research on the topic of (atoning or redemptive) almsgiving in early Christianity focuses on one of two principal areas: either (1) the historical/textual emergence or development of the practice within Christianity, or (2) the theological significance of the idea given the salvific importance of the Cross. For David J. Downs, alms is primarily concerned with the former.

This book review of David Downs’ work is in two sections. The first is an evaluation or analysis of the stated intention of the work, judging whether or not this goal was achieved. The second section is a description of how, through using this book as an important step, further research might be valuable. Downs indicates clearly that his deliberate aim is “to tell the story” of how atoning almsgiving came to have such a significant role in the early Christian practice of meriting forgiveness (5). An essential aspect of the story is the belief that the uniqueness of the atonement through the Cross is not inconsistent with the practice of atoning almsgiving and that the latter is an outgrowth of scriptural traditions (6). Downs draws attention to the contrasting views of redemption (cf. 201) and acknowledges that the odd juxtaposition may indeed be unexpected (2). While Downs is reluctant to regard atoning almsgiving as a compromise of the redemption through the Cross (6, footnote 9), he apparently grants that it is a possible (perhaps, plausible) interpretation: “Does the claim that the sins of those who act charitably can be covered by their love for others within the community of faith necessarily compromise the conviction that atonement for sins results from the sacrificial death of Christ?” (179). Downs’ provisional answer allows for suspicion of inconsistency on the part of some and the fear that a subtle presupposition may be dictating certain conclusions. It is further problematic to appeal to the maintenance of scriptural practices in the attempt to explain the emerging doctrine (cf. 28). The early Church felt justified in abandoning several scriptural traditions, including dietary restrictions, Sabbath observance, animal sacrifices, and the rite of circumcision. The natural question, then, is why did early Christianity retain the idea of atoning almsgiving? There were certainly reasons for each decision but explanations are needed for the choices made; otherwise the story is incomplete or misleading. Despite these criticisms, I found Alms to be an excellent work, fulfilling its stated aim and making a noteworthy contribution to the historical and textual studies of this issue, especially in the relevant passages in Tobit, 1 Peter, and Cyprian.

How, then, is the work by Downs to be elaborated in the continuing attempt to reconstruct the story of atoning almsgiving in early Christianity? I would suggest that greater attention be given to the role, significance, and even the origins of the problem of post-baptismal sin and its forgiveness. A critical step has been taken in Downs’ own recognition that Cyprian’s De opera et eleemosynis is a “most important” (57), “pre-eminent” (95), “seminal contribution” (233) to the doctrine that “almsgiving serves to purge the post-baptismal sins of those who show mercy” (57). Downs, however, acknowledges that Cyprian is not necessarily the first advocate; Cyprian’s position is “not novel” (270). Yet the question must be asked why Cyprian and others turned to this idea at all. Origen and Clement of Alexandria are regarded as predecessors (270; 270, footnote 87). Downs notes about Clement of Alexandria: “In his discourse on post—baptismal repentance in Quis div. 39-42, however, Clement does not specifically identify almsgiving or merciful deeds for the needy as a means to atone for post-baptismal sins” (270, footnote 87). Downs’ point here is unclear inasmuch as he says elsewhere, “…For this reason Clement of Alexandria is frequently highlighted as a leading proponent of atoning almsgiving, an interpretation that certainly adheres to the main themes of Quis dives salvetur” (186). Here it is worthwhile to quote from the work itself: “it is possible to perform a deed that is righteous and saving, namely, to give relief to one of those who have an eternal habitation with the Father”[1]

Despite these concerns, it is evident that in his analysis of one of the principal areas of the study, Downs has made a significant addition to the narration of the story of atoning almsgiving in early Christianity. He deserves our appreciation.