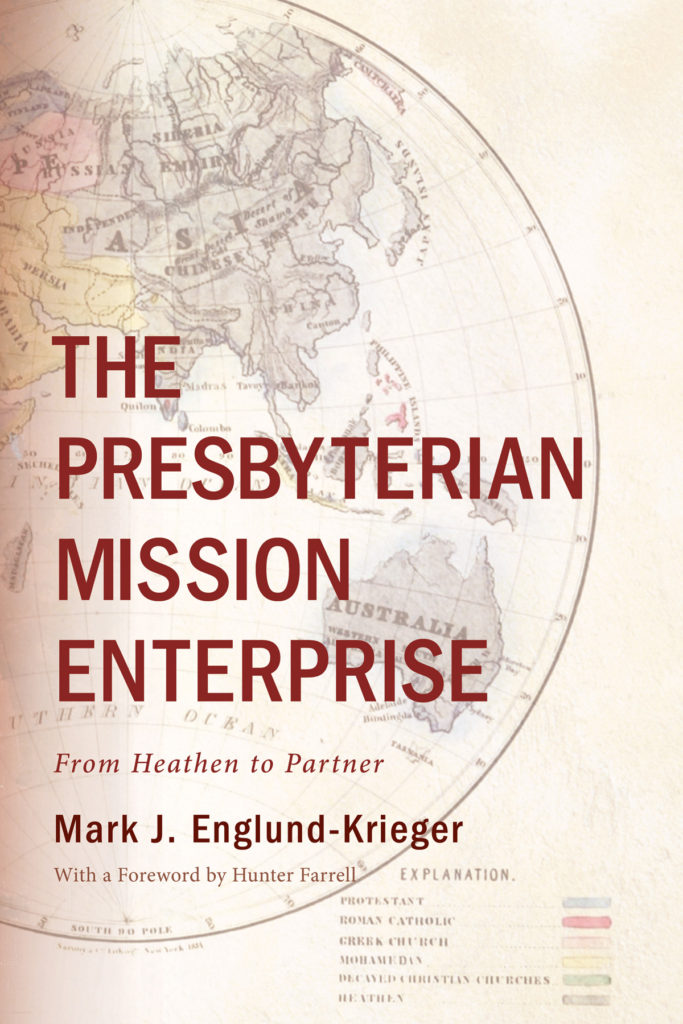 While not a book written for scholars, The Presbyterian Mission Enterprise: From Heathen to Partner is a well-researched, well-written, and helpful history of Presbyterian involvement in Christian mission. Writing from his perspective as Executive Presbyter of the Presbytery of Carlisle, Presbyterian Church (USA), Mark Englund-Krieger’s thesis is that Presbyterians have received a legacy of global mission work for which they should be grateful, a legacy which should provide inspiration and direction for the church’s future (2).

Englund-Krieger unfolds the story of Presbyterian mission by telling the stories of key historical figures who lived at critical moments in the church’s discernment about the nature and practice of mission. He highlights individuals whose work expresses what he believes are enduring Presbyterian values. Beginning the Scotch-Irish preacher Francis Makemie who shaped the American Presbyterians’ understanding of how the church organizes for mission, Englund-Krieger concludes with Hunter Farrell, the most recent director of Presbyterian World Mission, who emphasized partnership and lifted up a vision for new ways in which the increasing number of mission initiators can work with denominational mission offices and with each other. Farrell envisions relationships in which these initiators, including middle governing bodies and the growing number of congregations which are establishing direct global relationships, can collaborate, learn from each other, share best practices and hold one another accountable to shared mission values. To tell the story of Presbyterian mission in context, the author also includes the stories of English Baptist mission pioneer William Carey, American Congregational missionary Adoniram Judson, and, from the last century, Disciples of Christ mission innovator and educator Donald McGavran. Early Presbyterian leaders include Walter Lowrie, who led the work of the first Presbyterian Board of Foreign Mission, established in 1837, for thirty years, and his son John, who led the board for the subsequent twenty-four years, a period of expansion and growth.

Writing in an invitational tone that expresses his love for the church and his dismay over the mainline churches’ decline, Englund-Krieger encourages readers to see themselves in this unfolding story. He is reclaiming important values when he writes of Makemie’s call for a connectional church government organized for mission, David Brainerd’s sacrificial obedience to God’s call into mission, and William Carey’s reclamation of the Great Commission as God’s call to the church in every place and time. The author finds other important values in Ashbel Green’s call for the church to give mission its best commitment and in the manner in which Betsey Stockton’s exemplary life broke many barriers. Born and raised as a slave, she was encouraged and sent out with Green’s support.

A key figure in the story is Elder Robert Speer who served as secretary of the Presbyterian Board of Foreign Mission for forty-four years. During his tenure he was able to steer the denomination’s mission enterprise down a moderate path. Speer did not give in to the Fundamentalist demands of J. Gresham Machen or yield to the appeal of Pearl S. Buck who, articulating the themes of the John D. Rockefeller-funded Hocking Report [1], believed that the church should “cut off our talkers and try to express our religion in terms of living service” (126). Nevertheless, despite Speer’s reservations about the report’s theological statements and his personal conviction that the aim of Christian missions was to make Christ known, the Social Gospel emphasis of the Hocking Report came to dominate thinking in the church (113).

One of the developments that Englund-Krieger describes in detail is how the growing conciliar movement both reflects the spirit of the age following WWI and WWII and shapes the churches’ understanding of its mission. Organizationally the eventual merger of the World Council of Churches (WCC) with the International Mission Council resulted in a mission agenda that emphasized humanitarian service over evangelism. At the same time, U.S. churches are seeking to come to grips with a growing and vital global church, with maturing indigenous national churches that seek more authority and more autonomy, paralleling independence movements in places still dominated by colonial powers. In the light of his experience as a missionary in Japan, it is not a surprise that under the leadership of John Coventry Smith the Board of Foreign Missions becomes the Commission on Ecumenical Mission and Relations. The shifting vocabulary, Englund-Krieger correctly points out, reflects deep and controversial shifts within the church. “Missions” becomes the “mission” of the one, universal church and “foreign” is rejected as not expressing the global character of the church. “Missionary,” with its imperialistic implications becomes “fraternal worker” and, later, in the Presbyterian Church, “mission co-worker.”

By giving fresh voice to key leaders and revisiting important denominational decisions, The Presbyterian Mission Enterprise functions as a helpful record of a continuing conversation into which the reader is invited. The author also provides “Future directions for discussion, study and prayer” at the end of each chapter along with some additional content. Some of that content might have been better worked into the text itself, particularly his description of Lamin Sanneh’s reappraisal of the view that the Western missionary movement was imperialistic and primarily about the spread of Western culture (76).

There is a sharp divide in American Protestantism and in the Presbyterian Church between groups holding different opinions about the essential character of church mission work (157). At several points Englund-Krieger describes this split by using the terms “ecumenical” and “evangelicals.” His history might be clearer if he substituted the word “conciliar” for “ecumenical.” Some of the evangelical gatherings, including Lausanne which drew representatives from more than 150 countries and the gatherings related to the AD2000 Movement, which was even broader, were as ecumenical in character as the WCC, though different churches gathered.

Regarding the implications of the divide the author contends, “The future of the Presbyterian presence in the United States, and of the mainline Protestant ethos generally, depends on some reconciliation of these different perspectives and overcoming these divisions” (170). While there is not much to be encouraged about in this regard, there have been policies and resolutions that seek to address the conflict that might productively be used to overcome the now seemingly systemic division. The Presbyterian Church (USA)’s vision statement “Mission in the 1990s,” which reflects the leadership and commitment of Clifton Kirkpatrick to hold evangelism and social action together as expressions of a single mission, is one of them. Other documents not referenced by Englund-Krieger that might offer help in working on what is a false division of the Gospel and mission include the WCC’s “Mission and Evangelism: An Ecumenical Affirmation” (1982), “Turn to the Living God: A Call to Evangelism in Jesus Christ’s Way” (1991), a resolution adopted by the 203rd General Assembly of the Presbyterian Church (U.S.A.), and the reclaiming of the wholeness of the Gospel in the ongoing work of the Lausanne Committee found in Lausanne’s Manilla Manifesto’s “The Gospel and Social Responsibility” (1989).

Englund-Krieger’s telling of the Presbyterian story would have been strengthened by including a description of Presbyterian Ralph Winter’s work on modalities and sodalities, and the rise of para-parochial mission efforts throughout the history of the Christian movement. In addition, he could have mentioned Presbyterian involvement in and leadership of “the Gospel and Our Culture Network” which fruitfully seeks to draw upon the work of Lesslie Newbigin and explore what it would mean for U.S. churches to take a missionary stance towards their own culture.

There is a sense in which the broad sweep of the Presbyterian mission story, as Englund-Kreiger tells it, can be captured in the shift from thinking of those in other cultures and contexts as heathens to thinking of them as partners. He helpfully directs the reader to, and includes in his Appendix I, the PC (USA) policy “Presbyterians Do Mission in Partnership.” Yet while “partnership” expresses well the new opportunities of serving as part of a vital global church and captures the Gospel’s call to move from arrogance and control to respect and collaboration, partnership does not resolve the conflict about the true character of mission. Christians make up one-third of the world’s population today, but more than 8 in 10 non-Christians do not know a Christian. [2] In such a world a focus on partnership without a commitment to evangelism may reduce mission work to little more than ecumenical relations, Newbigin’s analysis of what transpired with the absorption of the International Mission Council into the World Council of Churches.

This helpful volume will be of great interest to denominational and congregational mission leaders who are seeking to ground their work and the church’s missional trajectory in a deeper understanding of history. Important questions remain and Englund-Krieger provides a valuable resource as we consider our response.

[1] Officially entitled “Re-Thinking Missions: A Laymen’s Inquiry after One Hundred Years,” the report in its final version was largely written by the chairman, William Hocking, who headed the group comprised of unofficial representatives from seven denominations.

Cite this article as: Robert J. Weingartner. "The Presbyterian Mission Enterprise: From Heathen to Partner." Practical Matters Journal (May 17, 2017). http://practicalmattersjournal.org/?p=3356.