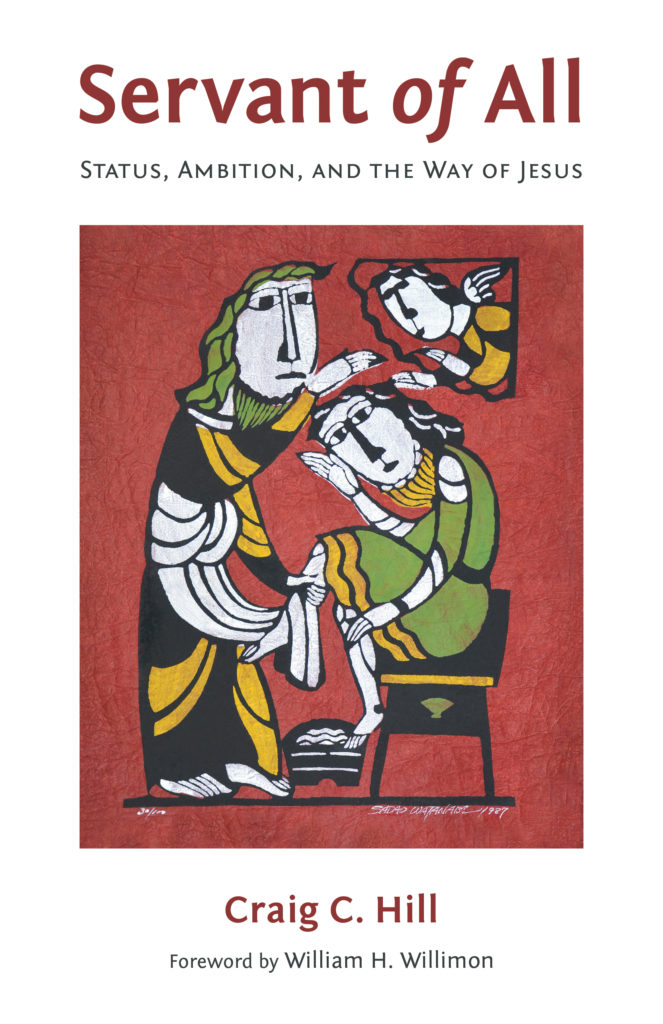 In Servant of All: Status, Ambition, and the Way of Jesus, Craig C. Hill examines how New Testament authors reasoned theologically about status-related challenges that early Christian communities faced. Hill’s experiences as a theological educator provided part of the impetus for this book. During his time as the creator and administrator of Duke Divinity School’s Doctor of Ministry program, he observed common struggles with “desire for appreciation and acceptance” among clergy and other D.Min. participants (xii). In response, Hill seeks in Servant of All to illuminate how the NT writings addressed these matters for the earliest Christian communities in hope that his study will benefit contemporary religious leaders who face such struggles (4).

An additional aspect of Hill’s personal experience is worth noting. In his preface titled, “An Ironic Thing Happened on the Way to Publication,” he offers a confession: shortly after completing Servant of All, Hill was invited to apply for the deanship of Southern Methodist University’s Perkins School of Theology, a position that he had accepted by the time of the book’s publication. He reflects, “As you might imagine, that put me in an awkward position, having just written a book on the subject of status and ambition. It was a bit safer tackling this topic from one of the back rows. Moreover, the book made a few explicit references to seminary deans. Rather than expunge these, I retained them as an inside joke offered at my own expense. Never in my wildest dreams did it occur to me as I wrote that these might be taken to be self-referential!” (xii–xiii). Although they do not dominate book, Hill intersperses similar personal, even vulnerable, self-references throughout, giving the work a pedagogical, almost conversational tone.

Servant of All tackles issues of status and ambition through ten chapters that build on one another. In chs. 1–2, Hill introduces the topics of status-consciousness and ambition as biological phenomena. By drawing on research from a variety of fields, including biology, neuroscience, and anthropology, he describes the evolutionary development of hierarchies and concern for status among social animals, and he explains that desire for status is a natural impulse for the majority of humans (16). He adds, however, that for most of us in the West our circumstances, characterized by relative abundance and safety, are different from those of our ancestors from whom we inherited our obsessions with status. For them, “In times of scarcity, one’s rank in the herd can make the difference between life and death” (24). For us, however, status-consciousness often occupies an ambiguous place in the moral frameworks of people generally, and of Christian leaders in particular.

In response to this ambiguity, Hill introduces two key concepts that he weaves through the remainder of the book. First, he suggests a principle of balance. Natural human drives like hunger and sexual desires “are basic and necessary to human existence” (10). Yet these drives often lead to harmful consequences if they are either fully indulged or completely neglected. Thus, a healthy human life normally demands responses to natural drives that strike a balance “between repression and indulgence” (9–26). As with hunger and sexual appetites, this principle applies to ambition and desires for status. Second, Hill puts forth the idea that early Christians configured status according to different realities than those of the larger Greco-Roman world. The NT writings depict early Christians as unusually diverse in their time: they were “an unconventional and unwieldy admixture of slaves and masters, Jews and Gentiles, women and men, educated and illiterate, as well as highborn and lowly” (2). In response, early Christian communities established their own internal systems for achieving and evaluating status, and these systems centered on the example of Jesus (2–3, 6, 25–26).

With these principles in place, Hill then dedicates significant space (chs. 3–7) to developing an overview of social relations and stratification in the NT writings. He argues that NT authors are remarkably consistent in their appeals to Jesus’ character and his example in their theological reasoning on social matters (25–26). Through numerous examples, such as the so-called Christ hymn in Phil 2:5–11 (30–31, 107–112), Hill shows that the NT witnesses depict Jesus’ character as marked by love and exemplified in his self-giving on behalf of others (31–33). Jesus’ “pattern” manifested “utter disregard for social status” (34).

Hill then turns to a range of NT writings to discuss the diverse ways in which early Christians (re)conceptualized the realities of status, honor, and shame according to Jesus’ example of self-giving. A passage from chapter six, which is devoted entirely to 1-2 Corinthians, captures the essence of Hill’s reading of the NT: “To new Christians, this religion must have seemed strange and costly, especially in its demands to de-center the ego, honor one another (including one’s social inferiors), and live in a community where the least by worldly standards might be the greatest” (83). The NT writers held to a vision of reality in which the means of constructing and measuring status had been fundamentally transformed vis-à-vis the predominant cultural influences.

In the final three chapters, Hill turns to issues of church leadership with special attention to the themes of ambition and ecclesial hierarchies. He defines ambition as “a strong inner drive directed toward a specific goal” (133). Ambition may be “productive” or “destructive” for ministerial vocations (132–34). As such, Hill points contemporary readers to the example of Jesus as remembered in the NT writings: Jesus aligned himself with God’s kingdom and modeled the right ordering of social relations through the lens of this new reality (148). With respect to hierarchy, Hill examines NT references to various roles and social relations in the early church. He highlights the balance of structure and spontaneity that the early churches sought to embody. Rather than offer prescriptive admonitions based on the NT witnesses, Hill gives “ten lessons” that the early Christian communities offer to contemporary readers. On the whole, they emphasize healthy orderings of ambition, the corporate nature of ecclesial life, and the need to maintain tensions between structure and dynamic vitality (172–74). Hill concludes Servant of All with reflections on some of what he believes the NT suggests for present-day Christian leaders. Above all, this includes a corporate commitment to embodying a reality that transcends socio-economic divisions. Hill summarizes this viewpoint with the assertion, “The church should be the place where the things God honors are honored” (175).

The strength of Hill’s readings of the NT texts is twofold. First, he balances particularity with synthesis. By not harmonizing the diverse NT witnesses into a univocal message, he examines individual passages and compositions to highlight their distinct perspectives. Yet he also demonstrates that these diverse voices share points of overlap and are surprisingly similar in their development of systems of status evaluation that function as alternatives to those of the larger Greco-Roman world. Second, Hill’s treatment is detailed and exegetical, but accessible. In conversation with familiar voices in NT scholarship, he engages the biblical writings critically in light of their historical and rhetorical contexts. The result is an economical and lucid exposition of how early Christian writers addressed their audiences with regard to social relations.

In sum, Servant of All is interdisciplinary, yet accessible; exegetical and detailed, but not technical; written for Christian leaders and practitioners, but with insights that are useful to Christian laity. In terms of insights into the NT writings or early Christianity, Hill does not offer new or groundbreaking concepts. This may disappoint biblical scholars who turn to the book in search of innovative uses of social-scientific criticism or new theses on the social realities of the earliest churches. This is not Hill’s aim. Rather, in my estimation, Hill accomplishes what he sets out to do, namely, to bring the NT witnesses into conversation with contemporary issues of status and ambition for the benefit of Christian leadership.

Cite this article as: Frederick David Carr. "Servant of All: Status, Ambition, and the Way of Jesus." Practical Matters Journal (May 22, 2018). http://practicalmattersjournal.org/?p=3562.