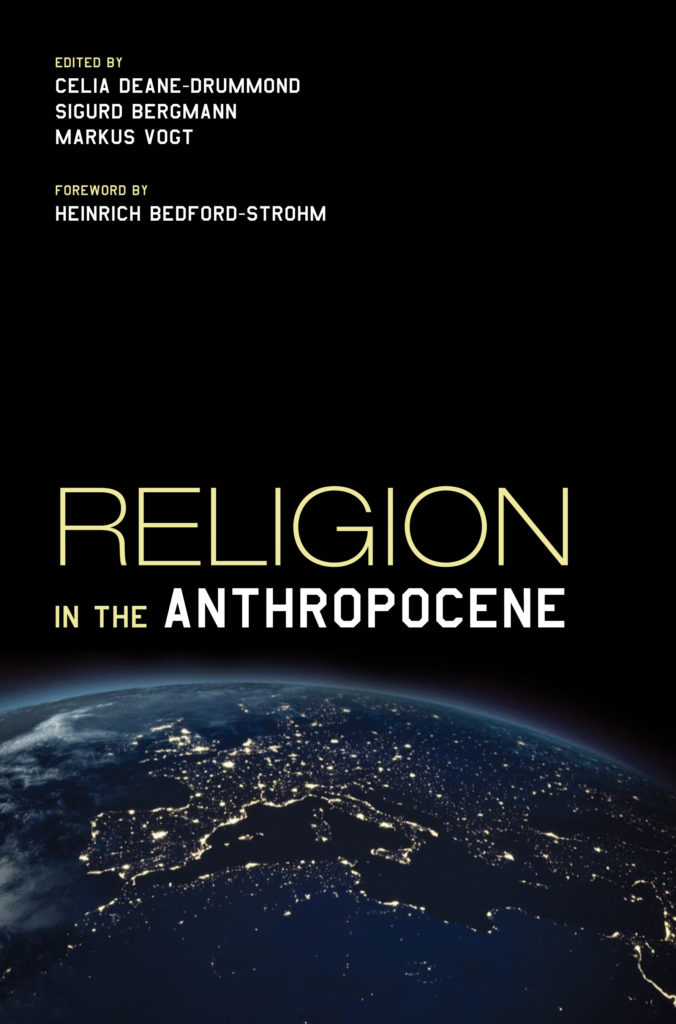 Paul Crutzen and Eugene F. Stoermer popularized the Anthropocene as a new geological epoch marked primarily by human activity in a 2000 International Geosphere-Biosphere Program Newsletter.[i][ii] Since then, “Anthropocene” has become a buzzword in all realms of environmentally concerned discourse.

Most simply, Anthropocene means ‘the age of the humans,’ coming from the Greek anthropos (human) and kainos (new). But the concept entails much more than the profound influence of humans on the Earth and its ecosystems, and is vibrantly debated in the scientific community. The Anthropocene has yet to be officially recognized as a geologic epoch, though it has been recently proposed for such recognition to the International Geological Congress. Nevertheless, the Anthropocene has taken hold in many academic fields and continues to prove its intellectual and imaginative potency. What might it mean to live in a time that is characterized by humanity’s ability to affect changes in Earth’s systems? What implications might such an understanding of our current geological epoch have for ethics, politics, religion, and philosophy? How will narratives of the Anthropocene shape and affect our thinking about and living into the future? These queries are explored in Religion in the Anthropocene, a collection of essays edited by Celia E. Deane-Drummond, Sigurd Bergmann, and Markus Vogt.

This volume consists of seventeen essays by academics of various disciplines from North America, Europe, South Africa, and Australia; it provides primarily a Western lens to engage with the Anthropocene. This largely Western vantage, however, does not hamper the diverse and at times conflicting positions held in the text, which makes it all the more interesting.

Religion in the Anthropocene is situated in the environmental humanities, which boasts the ability to “assess diverse scientific and cultural narratives” and provide “assessment of implicit religious narratives, or whether there are social and ethical implications” (1). It also promises to explore the “net of relations between society-culture-nature-subjectivity” as is the practice of the environmental humanities (2). The volume proves up to these tasks; it is a richly textured, multidisciplinary work that will appeal to a variety of readers in the academy, either in part or as a whole.

Organized in six parts along disciplinary lines, the volume offers essays from historical, philosophical, theological, ethical, and sociopolitical perspectives. The seventeen essays are well outlined in the introduction, making a tailored reading of the text eminently possible. The book is, thereby, tremendously useful to students and scholars with more select or disciplinarily confined interests.

For those unfamiliar with the Anthropocene as a concept, debates about it, and its possible implications, Michael Northcott’s essay (chapter one), “On Going Gently into the Anthropocene,” proves particularly insightful. It is not only clear and concise in offering a history of the concept of the Anthropocene and some debates surrounding it, like dating its origination, but also offers an interesting analysis of how the Anthropocene repositions humans at the center of the cosmos. The essay engages philosophical, historical, ethical, and theological strands of thought; this interdisciplinary piece is thereby an apt essay to open the volume. In his concluding thoughts, Northcott also argues that Christian theology and local churches are uniquely positioned to foster a Messianic, self-sacrificial movement of love that might preserve the Earth for future generations.

Other chapters devote a bit more time to wrestling with the concept and term itself, like Franz Mauelshagen’s chapter, “Bridging the Great Divide.” Mauelshagen’s discomfort with anthropos is at the fore of his historical essay. His analysis highlights the rift between the sciences and humanities regarding anthropos and the Anthropocene, which opens the door to potent interdisciplinary debate on the topic that might dramatically change siloed disciplines of the academy. Others devote some space to question the validity and usefulness of the notion of the Anthropocene itself.

Diverse perspectives and approaches in this volume at times flow rather ungracefully, as is common for essay collections that are not edited in a heavy-handed manner. For example, in the “Part One: Setting the Stage,” Bronislaw Szerszynski’s essay “From the Anthropocene Epoch to a New Axial Age” immediately follows Northcott’s chapter. Szerszynski thinks with “theory fictions” to imagine differently what narratives and relations could emerge between religion and the Anthropocene in his fictive Second Axial Age. Though a creative and insightful essay in its own right, within the text it is an abrupt transition from Northcott’s more orthodox academic approach to the topics. It does, however, importantly introduce and engage a number of threads that dip in and out of the text: temporality, narrative, and religious praxis.

The themes woven throughout Religion in the Anthropocene are too many to address in this brief review. However, one prominent theme worth our attention is the importance of the narratives we tell—be they fictive, theological, teleological, eschatological, anthropological, political, sociological…The narratives we tell help us understand the past, ourselves in the present, and thereby shape the ways we envisage and construct the future. These essays analyze how our conceptualizations of the Anthropocene shape these narratives, and highlight the important intersections with religions and religious narratives.

The text is at times densely theoretical and philosophical; elsewhere it is somewhat playful and hope-filled; some essays lean toward the apocalyptic narratives of the Anthropocene, others name and eschew that tendency, and still others give voice to the power of humans to construct our own futures in the Anthropocene. This volume certainly demonstrates the provocative potency of the Anthropocene, and its attention to the normative stakes of various Anthropocene narratives is a very welcome contribution. The essays in this text succeed in providing “important framework[s] for further discussion and analysis” for inter- and multi-disciplinary work on the Anthropocene (2). Religion in the Anthropocene is a text to which I will no doubt return.

[ii] I should also note, as do chapters in Religion in the Anthropocene, that Stoermer has used the term since the 1980s.

Cite this article as: Patrick A. Kelly. "Religion in the Anthropocene." Practical Matters Journal (June 10, 2018). http://practicalmattersjournal.org/?p=3549.