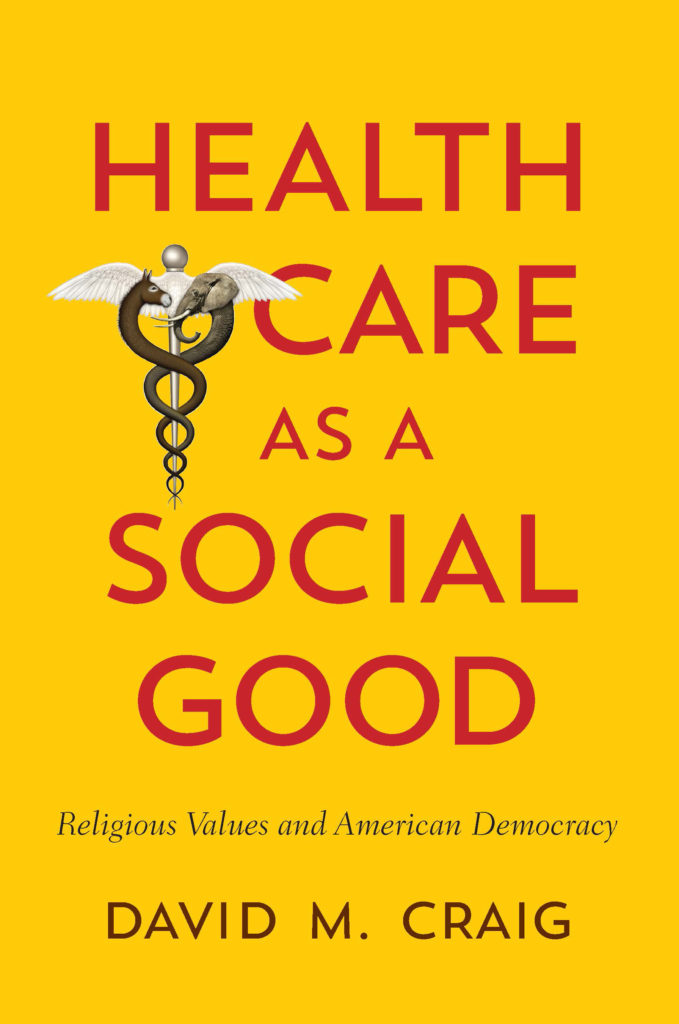 In his 2014 book, Health Care as a Social Good: Religious Values and American Democracy, David M. Craig argues that religious values are vital to the public conversation about health reform in the United States (3). The book is divided into two parts of three chapters apiece. The first part is titled “The Moral Languages of US Health Care” and describes the ethical (and in some cases, theological) assumptions in play when Americans describe what the health care system is and should be. The second section, titled “Religious Values in Health Policy, Markets, Politics,” features perspectives and case studies of religious organizations ranging from Jewish hospitals to inter-faith advocacy groups who are actively working on the front lines of health care delivery and reform. These two parts roughly correspond to Craig’s two theses about the role of religion in American health care debates, namely that naming religious values embedded in assumptions about health care can open generative political space and that US health care is, and had historically been, deeply shaped by the many religious entities working to improve health.

Several other excellent reviews have focused strongly on the first part of the book, wherein Craig builds his case that Americans should see health care as a social good. The author proposes that readers should think of health care as a social good, defined as one that ”is valued so highly by the members of a society that they share it and pay for it together through extensive and coordinated social investment” (86). He contrasts this view with more typical perspectives on health in which conservative Americans conceptualize health care as a private benefit or choice and liberal Americans who see it as a public right. Craig is on solid ground to point out that neither the liberal nor the conservative view is fully resonant with the piecemeal reality of health care delivery in the United States. Unfortunately, the on-the-ground reality of US tax and health system does not fully comport with Craig’s definition of a social good either – and he acknowledges as much in Part 2 (125). This leaves Craig in the unenviable position of having to go back and forth between arguing that health care already meets criteria for being a social good and urging Americans to use their moral imaginations to see it as such.

The second part of Craig’s work describes several of the ways in which religious values are already infused into the fabric of US health care delivery. Here, I felt Craig did some of his best analytic work. Chapter 4 stands to make a particularly useful contribution to the literature on nonprofit, 501c3 hospitals, and tax exemption standards. Therein, Craig argues against a social contract model of community benefits, wherein policymakers expect nonprofit hospitals to provide charity (or free) care at or above the levels of their lost tax exemption (147). To his eye, this simplistic view confuses the proper role of nonprofit organizations in US health care and mistakes justice for charity. Craig reveals his preference for the alternative conceptualizations of Catholic hospitals and Jewish hospitals, both of which demand a more strenuous commitment on the part of an organization to the community’s health.

Throughout the book, Craig urges readers to recognize the inherently social nature of health care. The following excerpt is representative:

Many Americans still speak the language of health care as a private benefit, so naturally they see their salvation in private choice. Their assumptions conflict, however, with the country’s longstanding reliance on social structures for sharing health care risks, costs and benefits with the history of social investments that have progressively made US health care into a social good.

If only because of Craig’s dogged persistence on this point, I wish this book was read far and wide. Public discussion of health care would indeed be improved if all voters recognized this reality.

Craig contends that religious values, language, and communities have particular assets that could help the general population move to a clearer and more enlightened understanding of health care. Like Craig, I would welcome additional leadership from religious communities. His Chapter 6 profile of the work done by Greater Boston Interfaith Organization in bringing about universal access to health care in Massachusetts reminds readers of the power religious coalitions can have in mobilizing public opinion and voters. Nevertheless, I remain less convinced than Craig appears to be that religious communities have special access to the right language and resources to propel us forward. Craig writes “Only religious congregations have the community presence and moral authority to inject social solidarity and social stewardship into health care reform on a national basis” (227). Particularly in light of recent declines in religious congregational membership, placing our hopes for comprehensive health reforms here seems imprudent.

In his final chapter, Craig appears to take a more global view of the challenge. In spite of his previous arguments about the singular power of religious entities, the author notes: “Health care only works if everyone is in it together” (214). He continues:

In the absence of social cooperation and civic trust around health care reform, there is little room to build the policy structures, take the organizational risks, establish the community partnerships or make the shared sacrifices for comprehensive reform (227).

Here, I made a marginal note: “Amen!” Social cooperation and civic trust will no doubt be essential if we are to improve upon what remains of the Affordable Care Act. Neither of these resources appears ripe for resurgence these days, but I find it difficult to accept that one needs religious resources to be part of their restoration. Far from a mystical revelation, the reality that health care only works if everyone participates is structurally imposed by how insurance plans pool health risks, hospitals cover unreimbursed care, and health care prices are set. We are likely to learn this lesson yet again as the Affordable Care Act’s individual mandate repeal takes effect.

I recommend Craig’s book to anyone interested in why health care reform has repeatedly stalled in the United States. His comfort-level in discussing religion, political philosophy, and health policy makes Craig’s an uncommon, but welcome, voice in modern health policy dialogue.  His framing of health care as a matter of moral contestation goes well beyond the surface engagement typically found in health policy texts.