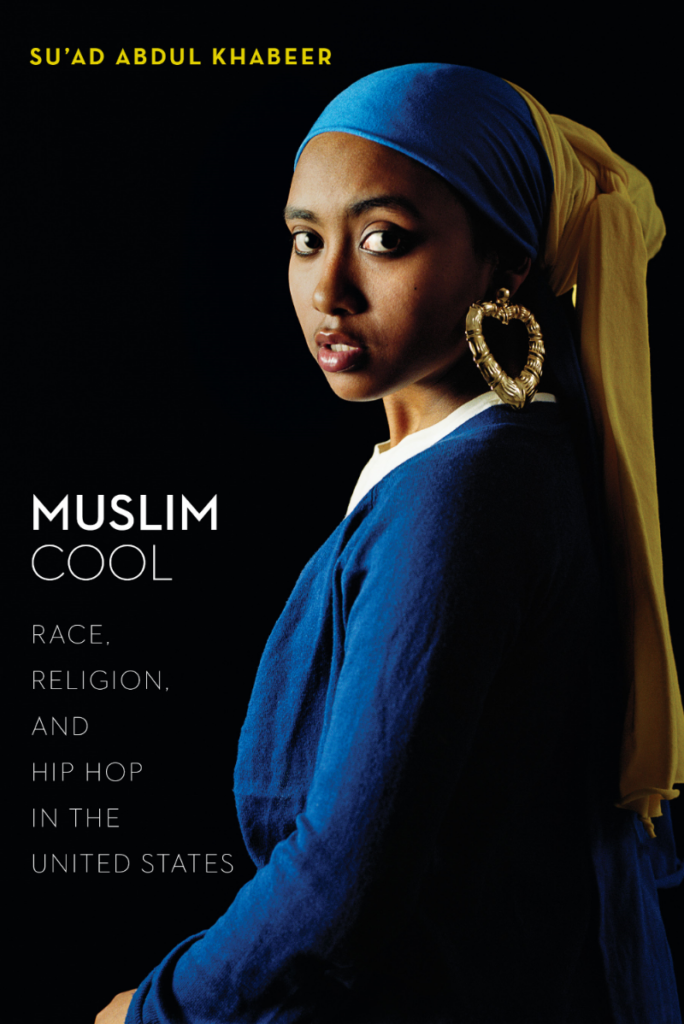 Following the tradition of Zora Neale Hurston and Katherine Dunham, Su’ad Abdul Khabeer uses embodied ethnography to tell the story of how Black and Brown Muslims in the United States embrace “Muslim Cool,” which “privileges Blackness as a politics and an expressive culture of resistance” (3). Abdul Khabeer’s own positionality as an Afro Latina Muslim, a New York native, and a hip-hop head helps her produce a rich and accessible account of a post-Civil Rights and post-9/11 environment in which Muslims in the United States are creating, resisting, and reimaging racialized hierarchies through embracing hip hop culture.

Muslim Cool makes three main arguments. First, Blackness is central to American Islam. Second, race and Blackness still matter. Finally, Abdul Khabeer argues that any analysis of Blackness must look at the ways in which it is used to both resist white supremacy and is complicit in perpetuating white supremacy. Abdul Khabeer argues that the United States is not a post-racial society. Abdul Khabeer decenters “diaspora narratives” that are especially popular when discussing Islam post-1965, when immigration reform laws were passed that led to increased immigration from South Asia and the Middle East. As Muslim Cool shows, American Muslims’ self-making is always constructed in relation to Blackness. According to Abdul Khabeer, Muslim Cool resists the racialization of Islam which marks Muslims as Brown and foreign and it rejects post-racial sentiments, where race is no longer supposed to matter. While her primary site was the Inner-City Muslim Action Network (IMAN) in Chicago, Abdul Khabeer includes observations from California, New York, and England to show how Blackness is constructed transnationally. Abdul Khabeer moves beyond lyrical analysis or exposés of the industry in her engagement with hip hop studies by exploring how hip hop shows up in people’s everyday lives.

The book is broken up into five chapters. The first chapter explores how embracing Muslim Cool realigns a person in terms of geography, political outlook, and epistemology. Muslims turn their attention towards the ‘hood, embrace Black consciousness, and become committed to social change through “personal transformation and direct action” (62). Chapter Two explores how public and private musical performances by Muslims are policed. Abdul Khabeer shows how debates around what constitutes haram music are often rooted in anti-Blackness. As a fashion studies scholar, I found Chapter Three and Chapter Four the most interesting. Chapter Three examines how the “hoodjab,” a scarf that is tied into a bun worn at the nape, is a blueprint for Muslim self-making. The chapter explores the complicated debates around sartorial cultural appropriation when Blackness is the primary reference for Muslim-ness in the United States. Abdul Khabeer writes, “When Muslim Cool is done across race, it is indubitably informed by a racial politics of cool in which Blackness and cool are synonyms and sites of youthful exploration and abandonment” (135). Chapter Four explores how Black Muslim dandies use their clothes to resist white supremacy that renders Islam as perpetually foreign, and what Abdul Khabeer calls “pious respectability,” which is the belief that authority and authenticity come from mimicking popular Arab cultural practices. From Malcolm X to Sherman Jackson, a fine tailored suit has come to symbolize Black Muslim masculinity and religiosity. In a Muslim Cool framework, dressing to the nines is transformed into a sign of “spiritual discipline” (161). The final chapter explores Muslim Cool’s relationship to the state on two fronts: the domestic and the global. Abdul Khabeer argues that while Muslim Cool resists anti-Black racism and ethnoreligious hegemonies, it has been appropriated by the U.S. government as evidence of the country’s commitment to multiculturalism–thus furthering the false narrative of U.S. exceptionalism. The manuscript concludes with ruminations of how Muslim Cool affirms that Black lives matter.

Muslim Cool makes key interventions in several fields including anthropology, hip hop studies, and Islamic studies. Perhaps Su’ad Abdul Khabeer’s most important contribution is to Islamic studies by centering Black U.S. Americans in the study of Islam. She joins a growing area of scholarship that focuses on interracial dialogue and tensions within the ummah among Black Muslims on one side and Arab and South Asian on the other side, including Sherman Jackson, Jamillah Karim, and Sylvia Chan-Malik. Abdul Khabeer pushes beyond the indigenous Islam/immigrant Islam framework that was appropriated by Black Muslims in the 1960s and has come to dominate the study of Islam in the United States by exploring the complex histories and lived experiences of Muslims across time and space.

There are two areas I wished Abdul Khabeer would have explored in greater detail: sexuality and competing definitions of Blackness among people of African descent. Abdul Khabeer made an important contribution to the study of Muslim masculinity in her discussion of Muslim dandies in Chapter Four, but she missed an important opportunity to explore Muslim sexuality. Abdul Khabeer alludes to tensions around definitions of masculinity and sexuality when she describes how Muslims dandies are often criticized for paying too much attention to their appearance. She notes it is common for dandies to be called “bint,” which is the African-American vernacular Arabic equivalent of “female.” However, she links this to class differentials, with lower-class men scoffing at the idea of spending large amounts of money and time on performing the dandy aesthetic, foreclosing the possibility of Blackness, queerness, and Muslim-ness intersecting.

Abdul Khabeer’s argument would have also been strengthened by exploring how different people of African descent construct and negotiate definitions of Blackness. While she includes Afro-Latinx voices in her manuscript, like in the introductory vignette of Esperanza who explains she didn’t grow up eating macaroni and cheese, she does not fully flesh out how even among Black people, the boundaries of Blackness are constantly contested and negotiated inter-ethnically. Abdul Khabeer explains that notions of Blackness in Chicago are rooted in the U.S. South; it would have been interesting to see how newer Black migrants from the Caribbean and the African continent are shifting definitions of Blackness.

These two critiques do not take away from Su’ad Abdul Khabeer’s innovative and well-rounded book. This intellectually rigorous, yet accessible book would find an engaged audience among undergraduate and graduate students, as well as general knowledge-seekers.