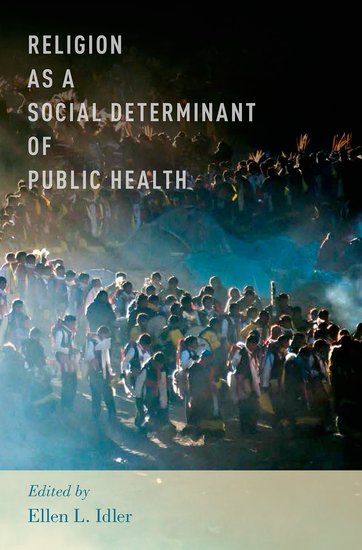 The edited volume, Religion as a Social Determinant of Health, is unique in that the editor, sociologist Ellen Idler, brings together interdisciplinary scholarship at the intersections of religion and public health to illuminate their complex, ever-present, and often overlooked interactions. Works featured in this volume draw attention to how religion shapes the health of billions of people across the globe, whether in the form of practices ranging from diet to pilgrimage or in broader macro-level political and economic contexts. Through their bridge-building scholarship, the authors show that religion is an integral part of the “conditions in which people are born, grow, work, live, and age, and the wider set of forces and systems shaping the conditions of daily life,” the social determinants of health; the dominant paradigm used by those in the field of public health to evaluate population health.[1] They contend that religion’s role as a social determinant of health has not been adequately accounted for, and therefore it must be evaluated if current and future public health challenges are going to be addressed in ways that are more efficacious and adequately attend to the cultural forces that shape population health.

In the first chapter, “Religion: The Invisible Determinant,” Idler explains the key theoretical positions on which the volume builds its assertions for considering religion as an independent social determinant of health. She posits that religion serves as a source of social support, social control, and social capital for adherents. In so doing, religion acts directly on population health by bringing individuals into communities and defining roles, regulating their behavior, as well as providing for them in ways that may be related to yet distinct from state-level institutions. A vital point in Idler’s theoretical stance is that religion’s role as a social determinant of health is context specific and can be both positive and negative.

Part one of the book examines religious practices that impact public health from diverse faith traditions. This section is divided by frequency of specific practices, i.e., daily, weekly, annually, or a one-time event, and scholars of each tradition speak to some of the health implications of these practices. An example of daily religious practice is vegetarianism among Seventh Day Adventists, which has both deep spiritual meaning and potential added health benefits for practitioners. On the other end of the time spectrum there are traditional Hindu cremation practices in India that have potential public health impacts, especially given proximity to and handling of the dead, which may prove dangerous if the deceased died of communicable illness. The religious practices surveyed in this section provide insight into how lived religious realities impact the health of billions of people worldwide across the life course.

Historical connections between religion and public health in England and the United States are explored in the second part of the volume. The works in this portion foreground the ways religious leaders have been at the forefront of many reform movements, mobilizing resources to affect change that directly impacts public health. One author, Karen Scheib, describes how the founder of Methodism, John Wesley, was motivated by his theological understandings of spiritual and physical health to create dispensaries and a health manual for Methodist laity. Others show how religion and public health are linked to more macro-level political causes. For example, the Temperance Movement and the Social Gospel Movement were rooted in Christian theological beliefs about issues ranging from widespread alcohol use to the injustices affecting the disenfranchised. Religious support was also vital to the U.S. Federal Government passing the Comstock laws of 1873, which effectively criminalized many aspects of sexual expression and reproductive autonomy at the time. The historical analyses presented in this part provide insight into the long-standing intersections of religion and public health—for better or worse—and bring our attention to the lineage of many contemporary political issues.

Part three of this volume looks at the interactions of religion and public health across the life course. The authors interrogate how exposure to certain religious tenets impacts the lives of adherents over time. One main theme discussed is how religious prescriptions and proscriptions impact the sexual and reproductive health of followers, which are broad ranging and includes such issues as fertility, abortion, and contraceptive use to those related to the health of sexual minorities. This section also explores how religion provides rules for living, like those related to, diet, alcohol use, or other behaviors that shape people’s identities and have the potential to impact health in both positive and negative ways. An important component of part three is that it utilizes epidemiological and empirical data that makes evident the links between religion and public health. It also points to the need for further research to be conducted that assesses religion’s impact on the health of populations over the life course.

Part four highlights that even though religious institutions and viewpoints have been a strong presence in the global response to public health issues that there has been little effort to prioritize understanding these connections and how they impact global health. Works presented in this portion discuss ways in which large organizations, like the Christian Medical Commission, the healthcare arm of the World Council of Churches, have been motivated to address public health crises out of their own theological understandings. They also show how smaller indigenous institutions have addressed public health issues facing their populations from religiously rooted perspectives. James Cochrane, Deborah McFarland, and Gary Gunderson discuss a particularly novel approach to mapping religious resources for health, the African Religious Health Assets Mapping Program, ARHAP. This program seeks to develop a framework for thinking about how religion shapes people’s health and health-seeking behavior as well as to conceptualize ways to assess and leverage the assets of faith communities to respond to public health issues in their communities. This section emphasizes the need for those in the field of global health to gain a better understanding of the religious responses to public health issues already happening the world over. It also points to the fact that those in global public can better understand the populations in which they work by strengthening connections with religious communities.

The confluence of religion and three contemporary public health challenges, HIV/AIDS, Alzheimer’s, and the potential for pandemic influenza, are discussed in part five. It draws our attention to how religion has played or could play a role in confronting these potentially life-threatening diseases. Of these challenges, religion has played perhaps the most controversial role is in responses to the global HIV/AIDS epidemic, as the epidemic directly confronts religious principles related to sex, sexuality, and gender. Safiya George and Sandra Thurman discuss how religion has served as a force that has been a barrier to public health by promoting certain types of sexual behavior while stigmatizing and shaming others. However, they also note that some of the most supportive responses to the HIV/AIDS epidemic have come from religious communities, providing life-giving social support as well as physical and healthcare resources. Other works in this section highlight religion’s role in addressing Alzheimer’s and the potential for addressing the pandemic flu. These authors provide insight into how religious communities and institutions can act as public health partners by teaching congregants about these public health issues and also serve as vital sources of social and material support for those affected. This final part shows first-hand the problems that may present themselves when religion and public health have competing priorities, yet it also points to how these differences can be overcome when the goals of religion and public health align to preserve life and give hope.

Idler’s edited volume is a vital work for scholars and practitioners of public health, religious studies, or those working in other areas that address public health concerns who seek to expand upon the social determinants of health framework by exploring religion’s often overlooked role in population health. By highlighting communal level religious practices that shape the health of adherents, examining how religious beliefs act as both barriers and facilitators to public health, and showing ways in which religion and public health can act in partnership, the book articulates a poignant argument for why religion must be evaluated as a social determinant of health. It shows that the social determinants of health paradigm currently utilized by those the field to evaluate population health is missing a critical driver of health, religion. This work serves as a model for the type of bridge-building scholarship that can occur between those in the fields of religion and public health, which can create partnerships and strengthen community capacities to better address public health challenges. Idler’s work does not shy away from the fact that mapping the ways religion shapes public health may be challenging and that bringing religious communities and institutions into partnership with those in public health can prove difficult. However, she and the other authors reveal that this endeavor is necessary if public health issues are going to be addressed in ways that are more culturally relevant, just, and efficacious.