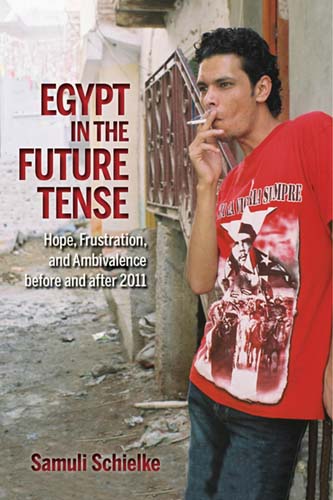 What does it mean to “live the good life?” How do individuals navigate the spaces between frustration and hope, dreams and thwarted realities, and piety and anxiety? Samuli Schielke’s second monograph, Egypt in the Future Tense: Hope Frustration, and Ambivalence before and after 2011, asks us to attend to these questions, drawing us to the ways in which young Egyptians inhabit the intersections of modernity, Islam, and politics. His ethnography follows the lives of primarily young, Egyptian men from 2006–2013 as they attempt to escape boredom, live religiously sound lives, find meaningful work, foster romantic relationships, and advance socially and economically in the pathways connecting their village located in the Egypt’s Nile Delta to Alexandria and Cairo. While the 2011 revolution is not the explicit focus of his book, it emerges in several chapters (and is included in the book’s title) as a key moment in the consciousness of his interlocutors. Schielke is both a filmmaker and a photographer, in addition to his work as a research fellow at Leibniz-Zentrum Moderner Orient and as an external lecturer in Visual and Media Anthropology at the Free University of Berlin. As such, his work not only engages the medium of print but photography and film as well. This multi-faceted way of sensing, perceiving, and being is reflected in his turn to ontological and affective states of frustration, boredom, and failure that shape how his interlocutors navigate their everyday selves and their ideals.

The book is divided into two parts: the ambiguities of grand schemes and the ways people inhabit and interact within grand schemes. The first five chapters focus on themes of a purposeful life, striving to be a good person, embodying religious knowledge (following the straight path), longing for romantic love, and the relationship between capitalism and religious revival. In the first chapter, Schielke examines the ambiguity of life-purpose through the lens of boredom and killing time. The second chapter explores the multivalent and, at times, contradictory ways of embodying living a “good life.” Chapter three builds from this multivalence and ambiguity to unpack ideas of moral perfection as constructed through Salafi revivalist practices and discourse in Egypt. Chapters four and five consider the grand schemes of passionate love, religious revival, and consumerist capitalism. The second half of the book shifts from a focus on the grand schemes and their frameworks to the quotidian strategies people develop to navigate them. In chapter six, Schielke examines questions about commitment to the Salafi path, moving from there to the avenues opened by dreams of migration to the other side (i.e. Europe) in chapter seven, and the constraint of the neoliberal bureaucratic, educational, and political systems in chapter eight. Finally, chapter nine concludes with his interlocutors’ experience of the 2011 revolution and its aftermath.

Schielke’s epistemological critique of the anthropology of Islam developed by Talal Asad, Saba Mahmood, and Charles Hirschkind is key to the book’s argument. He takes particular issue with Mahmood’s conceptualization of embodied piety and the Aristotelian tradition of ethical self-cultivation, explicitly and implicitly deploying Mahmood as a foil throughout the book. In response to what he views as Mahmood’s (as well as Asad’s and Hirschkind’s) theoretical abstraction, reliance on Foucauldian understandings of subjectivation through discourses of power, and an almost pure, or capital ‘I,’ Islam, Schielke offers a theoretical framework drawn from his interlocuters, whom he calls his co-theorists, that is attuned to the ambivalence and human-ness of being Muslim.

In addition to troubling normative configurations of an anthropology of Islam by attending to the everyday moments of Muslim-ness, Schielke engages in existential and ontological play with time, which Ahmed Ragab and others have referred to as timeplay.[1] His analysis of time’s sporadic movements and its lapses highlight central tenets of his book: ambiguity and ambivalence. While Schielke would perhaps refer to his use of time as interacting with an anthropology of time, I would argue that his attention to the particular timeplay of modern Egypt as lived in the spaces intertwining urban and rural is also reminiscent of dystopian fiction, as well as recent work in queer and critical theories, and the history of science.[3] This timeplay highlights the tension Schielke mentions between acceptance of one’s fate and destiny (qadar) and working towards one’s ambitions, aspirations, or dreams (see chapters 2–3).

Surprisingly, while marriage, love, flirtation, sexual tension, gender control, and men feature prominently in his ethnography, gender and sexuality are not engaged in a rigorous manner. Schielke occasionally gestures to the gendered nature of these experiences, strategies, and anxieties, yet does not fully interrogate the ways in which the existential realities and concerns he observes cannot only be considered gendered experiences but are also constitutive of his interlocutor’s performance gender. It would be interesting to see Schielke return to his discussion of boredom, anxieties, and frustration to consider, for example, the relationship between these existential states and masculinity in Egypt today.

This book is a noteworthy contribution to the study of Islam specifically and anthropology of Islam more broadly. It should be read in connection with the theoretical works it engages, namely that of Asad, Mahmood, and Hirschkind, as well as recent attempts to move beyond their theoretical tradition, such as Amira Mittermaier’s Dreams That Matter (2010), Su’ad Abdul Khabeer’s Muslim Cool (2016), Shahab Ahmed’s What is Islam (2016), Anand Vivek Taneja’s Jinnealogy (2018), and Sylvia Chan-Malik’s Being Muslim (2018). Schielke’s Egypt in the Future Tense asks us to reconsider the quotidian experiences of being Muslim in a rapidly reconfiguring world. For Schielke, to live the “good life” is to perform a technology of a fractured self, revolving around in the continual negotiation between dreams and frustrated desires, faith and anxiety.

Cite this article as: Brittany Landorf. "Egypt in the Future Tense: Hope, Frustration, and Ambivalence before and after 2011." Practical Matters Journal (June 17, 2019). http://practicalmattersjournal.org/?p=3867.