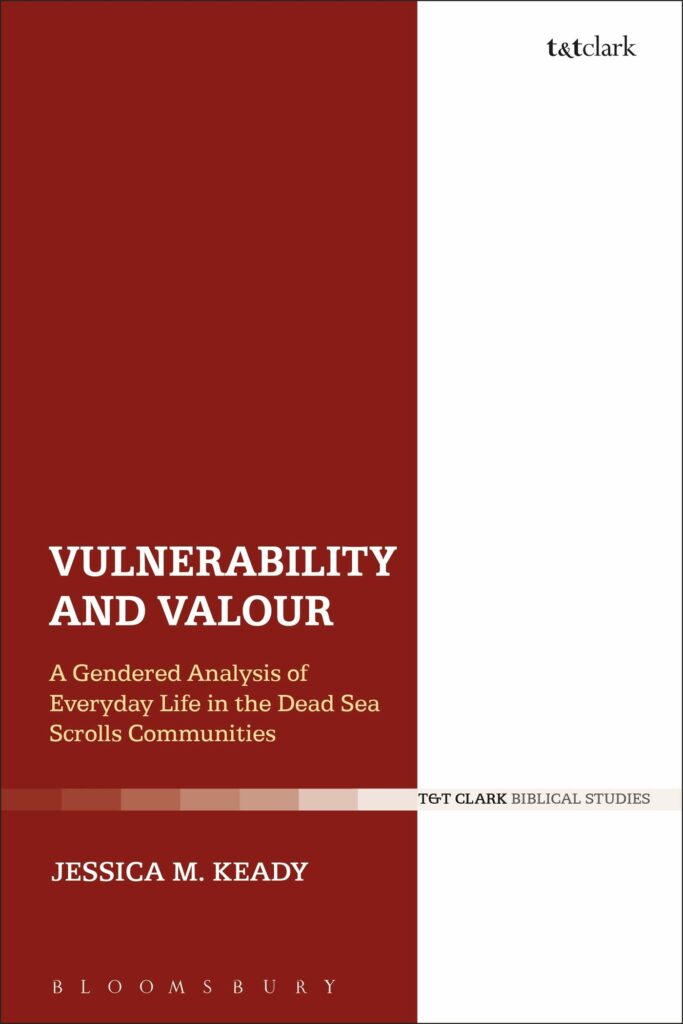 Jessica Keady’s work sheds light on the complex and dynamic relationship between gender and impurity in the sectarian Dead Sea Scrolls communities. Because the scholarship of ancient Judaism has tended to privilege the recorded practices of elite society, it has mistakenly characterized purity laws as static and uniformly observed. In her own words, however, Keady aims “to bring the non-elite male and female experience of impurity into the fold of discussion” (3). In so doing, she uses the Dead Sea Scrolls to explore the way ordinary gendered bodies interact with concepts of impurity on an everyday level. Keady accomplishes this by introducing a wide range of theoretical and methodological frameworks including, but not limited to, those established by Judith Butler, Raewyn Connell, and Susie Scott. These studies frame gender as performative, dynamic, and constantly changing. Vulnerability and Valour’s primary contribution is to say that impurity is equally fluid, complex, and gender-specific. Keady’s book is a welcomed addition to the study of gender in the Dead Sea Scrolls and an impressive advancement in the application of theoretical avenues to the study of ancient Judaism.

Following a brief introduction in which Keady defines her terms and maps out the layout of the book, the second chapter surveys the history of scholarship in regards to purity and gender in the Dead Sea Scrolls. The first twenty years of Qumran studies privileged classical sources such as Josephus and Philo in its reconstruction of the Dead Sea Scrolls sectarians as the Essenes. This led scholars to study the movement as a group of celibate men. However, the development of feminist-critical approaches in the 1970s marked a turning point, one in which scholars uncovered female voices and regulations in the extant documents. This awareness resulted in the amplification of purity studies beginning in the 1990s, which focused almost exclusively on the ritual standards of female bodies. Rejecting the systematic and static approach to purity offered by previous scholars such as Jacob Neusner and Hannah Harrington and taking her lead from the diachronic and fluid perspective according to scholars like Ian Werrett and Maxine Grossman, Keady proposes to study the dynamic nature of purity regulations and how they relate to both men and women in everyday experiences.

Chapter Three offers a reflection on the theoretical models employed throughout the subsequent chapters; namely, Masculinity Studies, embodiment theory, and the study of the everyday. Keady stresses that the fluidity of masculinity demonstrated in Masculinity Studies — a fluidity indicated along a spectrum ranging from the ideal hegemonic to the effeminate male — is a helpful heuristic for the study of purity in ancient Palestine. Embodiment theory, moreover, emphasizes the socially constructed significance of impure bodies and bodily experiences. This approach allows Keady “to reconstruct the possible ways in which men and women reacted to purity and impurity to determine how others may have perceived them within the communities when their status changed” (59). Finally, this book adopts Susie Scott’s study of the everyday, which accentuates three qualities of everyday life: its mundaneness, its routine repetition, and its potential to be transgressed. Keady maintains that this method offers a window into the mundane life of ordinary people and helps scholars to identify the repercussions of breaking accepted social conventions. Each of the subsequent three chapters of the book is structured around one of these methodological perspectives.

Chapter Four applies insights from Masculinity Studies to the Rule of the Community (1QS) and the War Scroll (1QM). This chapter suggests that each of these texts functions to construct an ideological hegemonic male image. Scholarship in Qumran studies has often reconstructed a hyper-religious lifestyle among the movement based on the intense standards of purity and comportment detailed in these discourses. Keady, on the other hand, suggests that 1QS and 1QM offer quixotic representations of an ideal male who observes impossibly rigid purity laws. Rather than provide a snapshot of lived experience at Qumran, both of these texts present their readers with a model by which to perform masculinity. This illuminates the community’s perception of ideal masculinity and, at the same time, places members along a concrete hierarchy in relation to how well (or poorly) they meet the masculine representation. In other words, the hegemonic male image in 1QS and 1QM both influences the way men carry themselves and makes men vulnerable to emasculation within the community. Keady posits that discourse of the hegemonic male pins men against men as they actively direct themselves in the pursuit of masculinity.

Chapter Five brings embodiment theory into conversation with Cave Four D materials and 4QTohorot. This methodological approach allows Keady to consider the way discourses about purity affect bodies in real ways, including performance, seclusion, and modesty. In other words, the acknowledgment of a body as impure involved significant social and performative repercussions, such as its ability to participate in ritual celebrations, partake in meals, or reside within the sectarian settlements. The primary argument in this chapter states that impurity makes men vulnerable with respect to their communities, but that impurity, in fact, empowers women. This imbalance is attributed to the fact that male impurity (e.g., nocturnal emissions) is sporadic and uncontrollable whereas female impurity (e.g., menstruation) is anticipated as part of a regular cycle. In that case, male impurity disturbs the rhythm of everyday ritual activities, as men are expected to participate in the public life of the communities. On the other hand, female impurity offers an opportunity for seclusion, rest, and comfort among other women from the congregation, whose menstrual cycles, Keady argues, may have synchronized after long periods of time together.

Chapter Six analyzes impure bodies in relation to space — and, more specifically, imagined space — in the Temple Scroll (11QTa) and the Rule of the Congregation (1QSa). Keady posits that 11QTa demonstrates the limited access to specific ritual spaces afforded to impure men and that 1QSa provides a look into the educational practices of the movement. Education in the sect, according to Keady’s reading of 1QSa, involved both young men and women, although the emphasis eventually shifts towards men. Though both of these texts present imagined spaces — 11QTa illustrates an imaginary temple institution while 1QSa portrays a post-apocalyptic congregation — Keady argues that they held a functional value to the everyday life of sectarian members at Qumran and beyond. The occupation of particular spaces by pure or impure bodies reflected the significant status of spaces designated as clean or unclean and equally male or female. Keady argues that “the specialization of gender within communities is based upon the disciplining of the body, which is carried out with fluidity through, and occupation of, diverse space” (168).

Chapter Seven offers a brief conclusion that restates the argument of this work; namely, that impurity in the Dead Sea Scrolls communities is performative, fluid, and tied to gender dynamics. I find her analysis of impurity as a feminizing and deleterious agent for men in Chapter Five, a particularly compelling argument. Many of the suggestions established in this book are necessarily speculative, as present evidence does not provide a full account of daily life within the sect, but each is derived from solid sociological foundations and reasonable assumptions. Keady notes that questions concerning the origins of the Qumran movement are not the main emphasis in this book. Yet, I would have liked to see a more thorough reflection on the structure of the sectarian organization. It is unclear whether Keady imagines these texts addressing a multiplicity of groups, all of which follow the same general code of conduct, or a single one. This seems like a significant step towards elucidating the common lifestyle of people behind the Qumran texts. Altogether, Keady’s work provides a provocative interpretation of everyday life in the Dead Sea Scrolls communities based on stimulating theoretical perspectives and represents a valuable contribution to scholarship on gender and purity in the Dead Sea Scrolls.