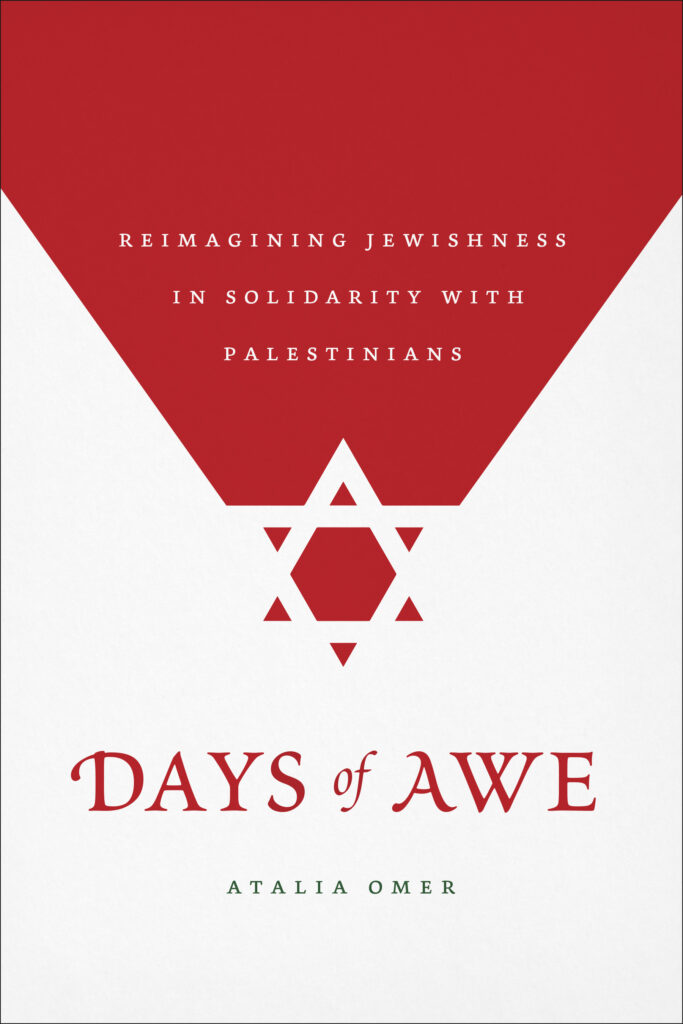 What does it mean to “reimagine” one’s faith? How does religion influence social movements and force communities to reimagine their identity in solidarity with the oppressed? Atalia Omer’s Days of Awe: Reimagining Jewishness in Solidarity with Palestinians, answers these questions by illustrating for her readers the ways in which Jewish-American Palestine solidarity activists refigure Jewishness liturgically and hermeneutically by listening to Palestinian narratives, struggling for social justice issues, and most importantly, experiencing ethical outrage. Days of Awe, in Judaism (also the title of the Book), is a time of reflection and repentance. These themes emerge as vital instances in the lives of Jewish-American Palestine solidarity activists as they reflect on the sins of oppression and act in solidarity with the oppressed, thus reimagining their own Jewishness and the ways in which they practice their faith.

Omer examines the processes of meaning-making among her interlocutors through in-depth interviews, participant observation, and analysis of various media outlets. Omer is an associate professor of religion, conflict, and peace studies at the University of Notre Dame. As such, her work brilliantly weaves together points of intersectionality (race, gender, colonialism, and religion) that are often ignored in grassroots movements. This focus on intersectionality is highlighted in her attendance to the various forms of marginalization and oppression as well as the multiplicity of ideals and beliefs expressed by Jewish-American Palestine solidarity activists.

The book is divided into three parts. Part one, which contains Chapters 1 and 2, outlines the book’s central argument, which states that Jewish critics of Zionism and the occupation are a social movement that shifts the meaning of Jewishness. Chapter 1 delineates the circumstances that led to the foundation of the Palestinian solidarity movement, focusing on narrativity by examining the account given about Israel which suppresses any questioning and renders Palestinians as ungrievable.[1] Chapter 2 examines four groups that challenge the occupation and Zionism as social movements. Using social movement theories, Omer analyzes how these groups wrestle with religion, culture, identity, and meaning-making as a way to reimagine their Jewish identity.

Part two of the book delves deeper into the activists’ personal transformations as well as communal values that inform this refiguring of faith. The true meaning of Days of Awe shines through as Omer traces the process of atonement of the activists for communal sins through social protest. Chapter 3 brings to light the voices of Omer’s interlocutors as they tell how they had to un-learn Zionism and undergo a self-transformation that saw them shift away from support for Israelis and towards solidarity with Palestinians. As Chapters 4 and 5 explain, un-learning Zionism is only one step in this process. Instead, Jewishness is reimagined through critique as well as a reassessment and re-employment of the Jewish tradition. A process Omer calls, “critical caretaking”(102). Chapter 6 articulates the type of Jewishness (“antimilitarist, spiritual, diasporist, postnationalist”) that emerges following the process of “critical caretaking,” thus highlighting the ways in which the social movement influences the process of religious change (154).

Part three connects the process of reimagining Jewishness to both critical race theory and decolonized understandings of anti-Semitism and peacebuilding. Chapter 7 examines the Black-Palestine solidarity movement and the history of Black-Jewish relations in order to destabilize the construction of Jews as white and decolonize Jewishness. Chapter 8 explores the process of reinterpreting anti-Semitism by Jewish activists through unlearning whiteness, standing against the occupation, and struggling against the rise of anti-Semitism is the US. This process enables Jewish activists to create an intersectional movement that attends to multiple sites of oppression and discrimination. Chapter 9 concludes by explaining how refiguring Jewishness contributes to the study of religion and peacebuilding.

Omer’s notions of un-learning and reflection are central to the book’s argument. Not only are they uniquely used as sites of research, Omer also uses them to challenge simplistic understandings of religion. By examining the ethical outrage and the Days of Awe experienced by her interlocutors, Omer brilliantly formulates a conceptual framework of religion that is decolonial; intersects with experiences of race, gender, ethnicity; and that points to multiple sites of oppression. This makes Omer’s book a groundbreaking contribution to the study of religion, violence, and peacebuilding. At a time when the world is divided into binaries of “Israeli vs Palestinian,” “Jew vs Arab,” “civilized vs uncivilized,” Omer, born Israeli, along with her interlocutors, courageously disrupts these narratives and invites us to participate in a relationality that lies beyond such binaries.

Surprisingly, while Omer clearly highlights how Palestine is crucial for cultivating anticolonial sentiments and religious reimagination, the implications of refiguring Jewishness could have been engaged more thoroughly. Omer intermittently signals to the Israeli-Palestinian context yet does not fully examine the ways in which Jewish activism influences Israeli Jewry. For instance, I would have been interested to see how and if Days of Awe, as experienced by Jewish American activists who support Palestinian rights, impacts and refigures the Jewishness of Israelis.

Days of Awe cuts across disciplines and offers an important contribution to the study of religion and peacebuilding specifically, and the study of religion and social movements more broadly. Prior knowledge of the history of the Israeli-Palestinian conflict would prove fruitful when engaging this book. Omer’s Days of Awe challenges us to examine pre-existing narratives and to acknowledge the grievability of those often seen as unworthy of grief. For Omer, to reimagine one’s faith is to sit in the space of Days of Awe reflecting on one’s sins and rewriting one’s communal script of repentance in solidarity with the oppressed.