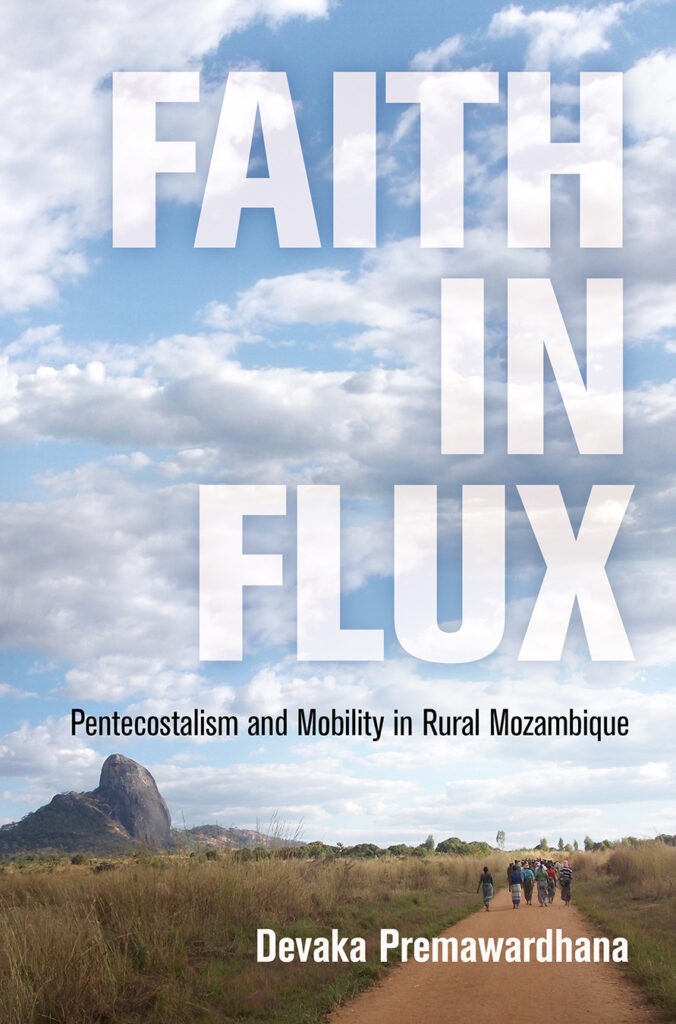 The spread of Christianity worldwide during the twenty-first century cannot be discussed without the success of Pentecostalism. While the heavy presence of the Pentecostal tradition has been explored in the existing literature, Devaka Premawardhana, in his book Faith in Flux: Pentecostalism and Mobility in Rural Mozambique, pays attention to how Pentecostal Christianity in a rural area of Northern Mozambique struggles to grow among the Makhuwa. By shedding light on existential mobility, he explains the Makhuwa’s engagement with both Pentecostal Christianity and ancestral religion, arguing that “religious identity is an imperfect indicator of religious activity” (10). This not only levels criticism against the narrative that highlights the exponential growth of the Pentecostal tradition but also revisits the idea of a rupture with the past. Premawardhana’s phenomenological approach engages with mundane events and interactions through storytelling techniques and shows that the Makhuwa’s understanding of religion is rooted in their nature of being mobile, which contradicts Eurocentric and colonial definitions of religion.

This book consists of three parts titled, “Othama—To Move,” “Ohiya Ni Ovolowa—To Leave and To Enter,” and “Okhalano—To Be With.” In the first chapter of the book, Premawardhana emphasizes the Makhuwa’s “culture of mobility” that shapes their engagement with religious practices, and political and environmental changes by investigating Makhuwa history and myth. Premawardhana aims to “understand the Makhuwa propensity for religious mobility in terms of the Makhuwa propensity for geographic mobility” (67). While he problematizes the idea limiting mobility to modernity in chapter one, in chapter two he explores the Makhuwa conception of the land, which emphasizes their “mobility and the refusal to be contained” (54). Furthermore, their conversion to Pentecostalism could not make them permanent Christians because they repeatedly moved into new churches and returned to their ancestral religion. For the Makhuwa, a rupture from the past and transcendence of their circumstances is not a central issue, but rather rootedness in tradition, mobility, and flexibility is essential.

Chapter three in Part Two pays attention to the lived body through rituals and describes how boundaries function in Makhuwa tradition, which does not eliminate but rather embraces. Initiation rituals reveal both mobility and the disposition toward mobility. They leave a religion and enter another. The transgressive moves have been missed by most scholars because they tend to read the process of conversion as “singular, momentous, and once and for all” (91). In chapter four, Premawardhana highlights that systematic divisions of religion are foreign and that polyontological mobility explains how no contradiction exists between being Pentecostal and practicing ancestor rituals for the Makhuwa. Christianity and Makhuwa traditions are “serially compatible” (100). Premawardhana’s focus on ordinary practitioners shows “the demand for rupture is not a demand for definitiveness” (106). This enables them to avoid being disconnected from their tradition and remain faithful to “the Makhuwa way of being” (113).

In Part Three, Premawardhana places Makhuwa women at the center of chapter five, explaining that gender inequality is a recent development and stressing the matricentric character of Makhuwa society. The exclusion of women from education allowed them to preserve Makhuwa oral traditions (131). Furthermore, the Makhuwa’s understanding of religion “not as objects of acquisition but as avenues for ‘being with’” points to religious mobility among Makhuwa people, especially women (117). Chapter six shows how the Makhuwa’s “disposition toward mobility and mutability” can also be witnessed within Pentecostal churches (138). Premawardhana holds the argument that Pentecostal Christianity “resembles and restages the pre-Pentecostal lifeworld” of the Makhuwa (142). He states that “an aversion to abstraction and systematization” remains strong among Makhuwa and they consistently move between and make changes to Pentecostal Christianity and their ancestral religion (147). As a result, there was no explosion of Pentecostal Christianity in Makhuwa society, Mozambique.

This book contributes to several fields of study including World Christianity and Anthropology of Christianity. Scholars of World Christianity have emphasized the success of Pentecostal Christianity when discussing the rise of the global south over the past century and religious demographics supported the idea.[1] However, it is fascinating that Premawardhana’s use of existential anthropology with a stress on polyontological mobility sheds light on the veiled aspects of Pentecostalism in rural Mozambique, where a Pentecostal explosion failed to take off. He does not echo the Pentecostal triumphalism of twenty-first century Africa, but rather critically challenges the idea and thereby enriches the picture of African Pentecostalism. While it is obvious that his study’s emphasis on the Makhuwa’s mobility contributes to the debate on radical rupture and is important for the study of Anthropology of Christianity, the investigation is also critical for the study of World Christianity due to its focus on a non-western perspective in studying Christianity. The local perspective refutes the systematic division of religion in Makhuwa society and therefore avoids Eurocentric interpretations in understanding the Makhuwa and Makhuwa Christians. This affirms that Christianity is not a western religion but rather a religion also practiced the Makhuwa way and rooted in their local culture. Furthermore, Premawardhana’s engagement with Makhuwa women provides a space for scholars of women’s studies to engage and develop.

By Younghwa Kim
Younghwa Kim is a Doctoral Student in Religion at Emory University.