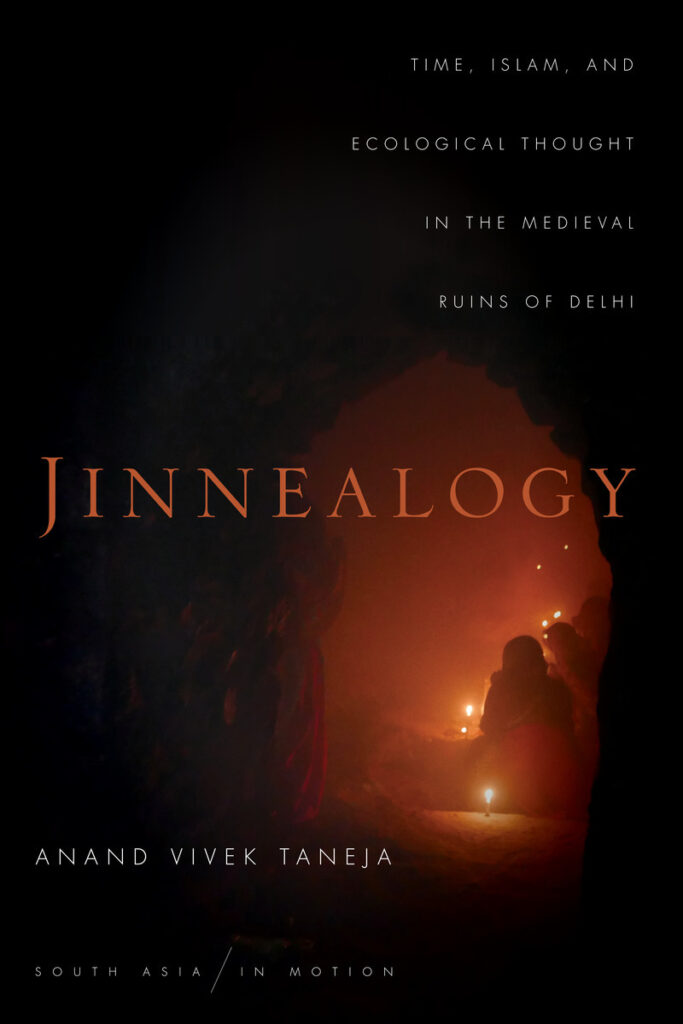 Anand Vivek Taneja, Assistant Professor of Religious Studies, Vanderbilt University received his PhD from the Department of Anthropology, Columbia University in 2013. His book, Jinnealogy: Time, Islam, And Ecological Thought in the Medieval Ruins of Delhi received the 2016 Joseph W. Elder Prize in the Indian Social Sciences, sponsored by the American Institute of Indian Studies and an honourable mention in the 2019 Gregory Bateson Book Prize, sponsored by the Society for Cultural Anthropology. Jinnealogy mostly centres around the 14th century ruined medieval palace of Feroz Shah Kotla in Delhi. A part of the ruin has come to be regarded as a dargah or Muslim saint-shrine in the contemporary period. In the words of the author, “the darkness and ruination of Feroz Shah Kotla” would mark a striking disjuncture from the materiality of the contemporary city and contributes towards making it a site of veneration (61).

In his work, Taneja has tried to explore Delhi’s relationship with the past through its ruin-scape. Feroz Shah Kotla today is mostly frequented by people from working class Muslim and Dalit neighbourhoods of old Delhi—areas worst affected by the excesses of Emergency in the mid-1970s (3). They are drawn to the ruins to find hope against despair. The saints venerated at this dargah are Islamic spirits known as jinn. Visitors of this dargah write letters of petition to the jinns in the form of shikwa (a Perso-Islamic legal form of directly appeal to the Sultan), placing them in various niches and alcoves of the ruin. According to Taneja, the ritual veneration of the jinns at Feroz Shah Kotla is embedded in the postcolonial condition of everyday life in Delhi (3). Here, caught between layers of bureaucracy devoid of the personal, the subject often gets alienated from the state machinery itself (4). The jinns act as transmitters of blessings and authority. Jinnealogy, as Taneja writes, is thus the process of superseding the “human chains of genealogy and memory” by the other-temporality of the jinns and can instantaneously connect individuals hundreds of years apart (25, 44).

Taneja’s ethnography of the regular visitors at Feroz Shah Kotla reveals their deep faith in the site as a space of justice against the backdrop of the violence and illegibility of the postcolonial state. Interestingly, it also discloses an absence of historical consciousness among the regulars, who have innovated a parallel ritual relationship with the monument’s medieval past. For the Archaeological Survey of India (ASI) the prayers and offerings violate its policy to uphold the sanctity of a protected historical monument. Taneja’s research questions the detachment between state policies and the relationship of the public with the past(s). The ritual veneration of the jinns was a comparatively recent phenomenon that had its root in the larger politics of Delhi in the 1970s where the control over the Indo-Islamic heritage sites emerged as a fundamental Muslim political demand. Thus, through Jinnealogy, Taneja argues for constant acts of articulation and re-articulation of the past to configure the present.

At the same time, the present socio-historical moment embodies within its womb the narrative(s) of forgetting as well. For instance, a part of the sacred geography of Delhi, including Satpula near the dargah of Chiragh-e-Delhi and the Pavan Pariksha Mela at the Jhandewalan Temple have now almost vanished. Jinnealogy is in part an account of the politics of the forgetting and remembering of the past that is played out in the everyday but which is felt only in the longer span of time. The work captures this phenomenon very well. Recently, in November 2019, a group of Dalits observed the death anniversary of Sultan Sikandar Lodi at his mausoleum in Delhi’s Lodi Gardens. Their action could be seen as an attempt to forge Muslim-Dalit solidarity following the demolition of a temple of Dalit poet-saint Ravidas (much revered in North India) by the Delhi Development Authority in August, 2019.[1] Thus, the ‘past’ is a lived experience as well. The ruins of Feroz Shah Kotla or the mausoleum of Sikandar Lodi seems to be ‘resurrected’ from the stillness of death (read: popular amnesia).

Taneja’s research in Delhi echoes Vazira Zamindar’s proposal for a ‘Long Partition,’ that sees the 1947 partition not as a singular event but an inauguration of a series of dispossessions, displacements and amnesias.[2] In India, the post-partition state (despite its avowed secularism) was motivated by the Hindu-majoritarian desire to remove all signs of Muslim sovereignty and belonging. This involved archival amnesia that sought to remove signs of Muslim presence from the landscape, closely followed by a ‘cultivated amnesia’ of bureaucratic archives towards the memories of everyday life (30). Taneja theorizes that the jinn saints speak of a deep history that constitutes the North Indian self, far older than Partition. The essence of this could be captured in Rekhti poetry of the 18th to early 19th centuries but one that was purposefully censured following the mutiny of 1857. The jinn saints re-appear and are transformed into public saints in Feroz Shah Kotla in the 1970s. However, how unique is this revival of jinn saints at Feroz Shah Kotla at contemporary North Indian context? And, are the regular visitors aware of the larger theological traditions and Urdu literature?

Taneja in his Jinnealogy at times seems to romanticize and over-simplify Feroz Shah Kotla as a radical space that allows for the estrangement from one’s social identity. The anonymity of everyday interaction, he argues, provides for the possibility of a kinship that transcends the usual boundaries of family and community (91). The jinns are viewed as non-patriarchal father figures. The ruins of Feroz Shah Kotla thus become in Jinnealogy a ‘fantastic’ land that provides a prospect to seek and transgress boundaries of religion, caste and class. It tempts me to question if the jinns of Feroz Shah Kotla offer an illusion of a vanishing cauldron where the ‘realities’ of everyday life in contemporary North India could disappear. Moreover, the claim that the visitors can maintain anonymity and nameless intimacy at Feroz Shah Kotla contrasts with the instances of lugaibazi or womanizing game and create two divergent images of the same site—escape and captivity. This could very well confuse the readers. Perhaps, this begs deeper reflection on Taneja’s own positionality as an ethnographer, which remained understated in his work.

As a reader, one is easily captivated by the spell cast by Taneja in Jinnealogy, which also captures his deep attachment to the city. Nevertheless, the work poses several questions, especially to someone like myself, who spent the past six years in Delhi. His work becomes extremely important given the contemporary political climate of India. The dargah in Feroz Shah Kotla is frequented by both Hindus as well Muslims(92). An idea of communal harmony seems to be confined within its walls. As I write this review, Delhi has witnessed communal riots just a few months back. With the rise of active far right politics in India, Muslims and their institutions are under extreme threat. How will spaces such as Feroz Shah Kotla with its jinn saints as portrayed in Jinnealogy survive this onslaught? The after-story of Jinnealogy would thus be a worthy read as well.

[1] Shoaib Daniyal, “Why are Dalits marking the death anniversary of a medieval sultan in Delhi’s Lodi Gardens?”Scroll.in, November 21, 2019,https://scroll.in/article/944461/why-are-dalits-marking-the-death-anniversary-of-a-medieval-sultan-in-delhis-lodi-gardens